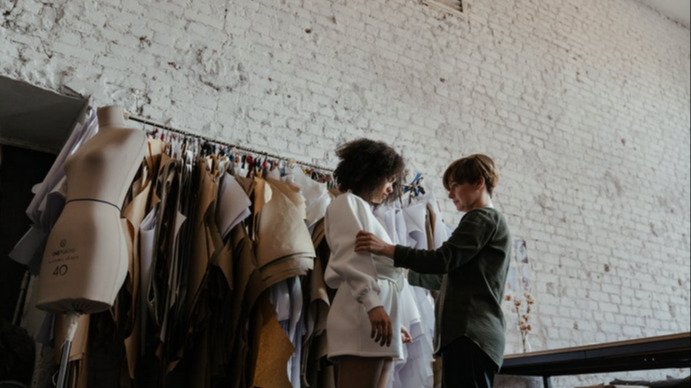 Even though I'm a huge movie buff, I admit that sometimes I don't notice certain details. For example, when the moviemakers hide something in the scene or even the actor's clothing.

Those cool Easter eggs sure are fun to spot, huh? So today, I'm going to share with you a few of such details focusing specifically on costumes. Let's see if you were able to find these gems or if I just blew your mind. 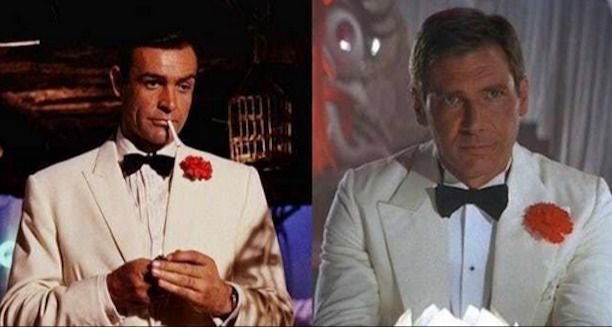 "Stephen Spielberg wanted to direct a James Bond film, but Eon studios said no. When he told George Lucas this, they decided to create Indiana Jones, and in this scene in Raiders of the Lost Ark, Indiana Jones is dressed as James Bond."

Wow, I had no idea about this and I'm a huge Bond fan.

"Harry Potter And The Order Of The Phoenix" 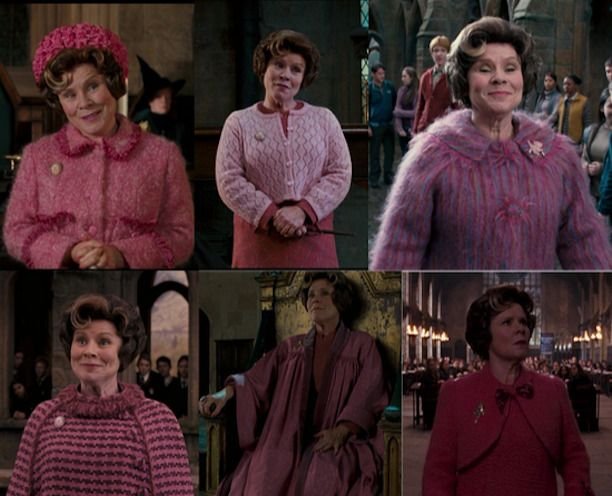 "In Harry Potter and the Order of the Phoenix (2007), Umbridge's outfits become a darker shade of pink as she becomes more powerful. Official fact from the 'Warner Bros Studio Tour.'"

Okay, I'm sure Potterheads knew that but I never would have noticed that.

"Back To The Future Part II" 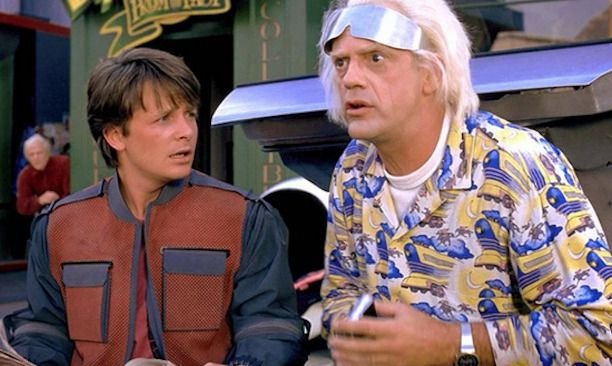 "In Back to the Future Part II, Doc's shirt design has two horses chasing a steam train, foreshadowing the events of the next film."

"The Matrix, (1999) The Oracle's outfit and kitchen are a reference to Michaelangelo's Delphic Sibyl, depicting a Greek oracular figure."

Oh, wow. I honestly wouldn't have put the two together. I love this kind of movie trivia.

Okay, I didn't watch this version of Little Women yet, so I'm going to have to look for those scenes now that I know about this cool film trivia. Did you notice it? 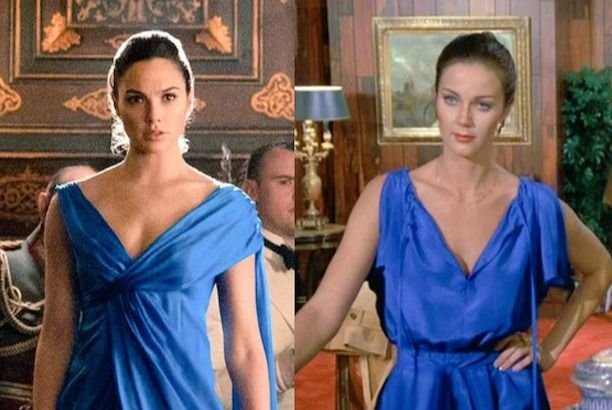 I really love when the filmmakers do that. It's such a cool way to pay homage to the series that started it all. I bet Lynda Carter approved of that. 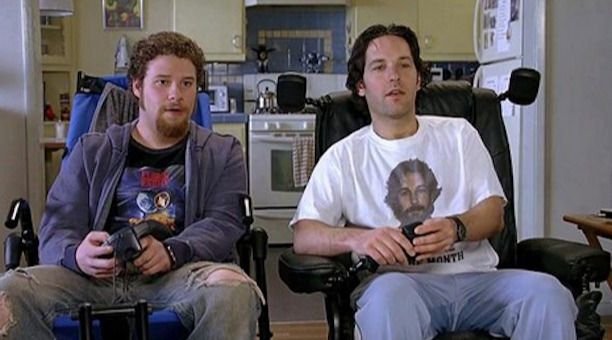 "In The 40-Year-Old Virgin, Paul Rudd wears a shirt with his photo on it. The photo came from the day they shot their work badges. The costume designer printed it on a shirt on a whim and left it with the rest of Rudd’s wardrobe. When he saw it, he chose to wear it in this scene."

"Forrest Gump. When Jenny introduces Forrest to his son, they're wearing the same outfits as Burt and Ernie and are also leaning to the left just like them."

I completely missed that. Did you catch it yourself? If you did, kudos to you. 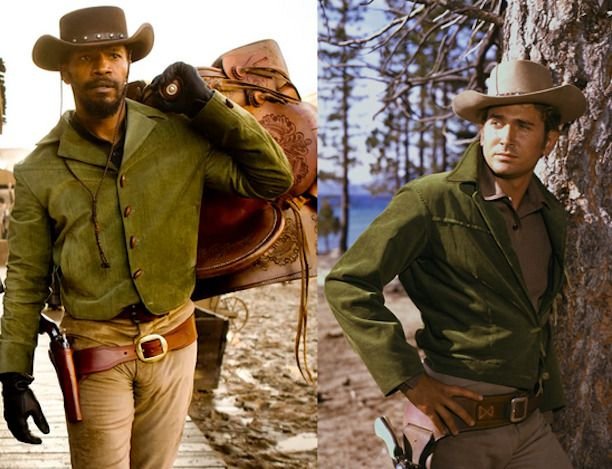 "In Django Unchained (2012), one of Django’s outfits is based on an outfit that Michael Landon wore in the TV Western Bonanza."

Who else watched Bonanza when they were growing up? I loved it, ha, ha. And I never knew that. 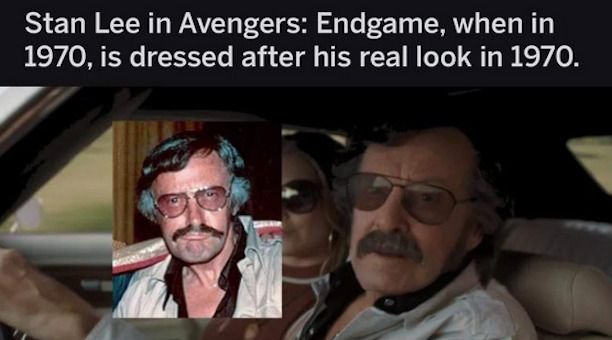 "Avengers: Endgame — Stan Lee's cameo in the movie, his outfit was based on his real-life wardrobe from the 1970s. Looking fly in the movies and real life."

Aww, I miss Stan Lee. I loved seeing his cameo in all the movies.

"Scott Pilgrim Vs. The World" 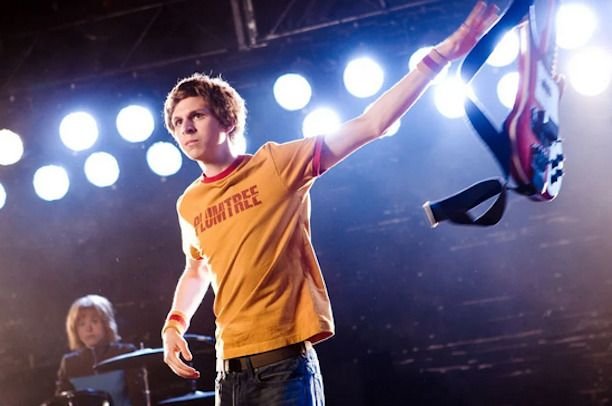 "In Scott Pilgrim Vs. The World (2010), Scott is seen wearing a 'Plumtree' shirt. Plumtree is a Canadian band that, in 1997 released a song called 'Scott Pilgrim.' This song would inspire Bryan Lee O'Malley to create the Scott Pilgrim comics, on which the movie is based."

Oh my, I definitely had no idea about this. How about you? 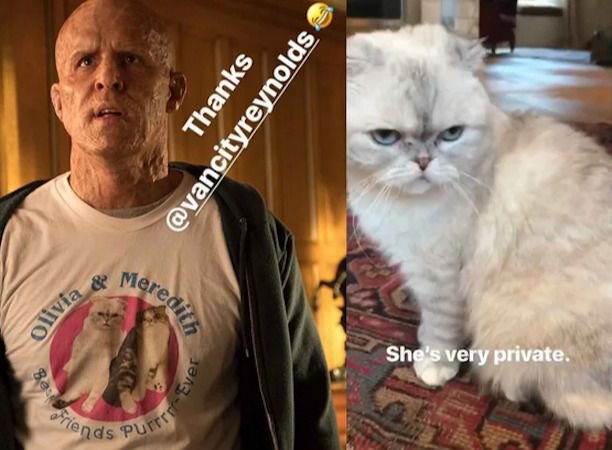 "In Deadpool 2 (2018), Wade wears a shirt that says: 'Olivia & Meredith. Best Friends Purrrr-ever.' The two cats actually belong to Taylor Swift. The production crew had to get permission from her to use their image." 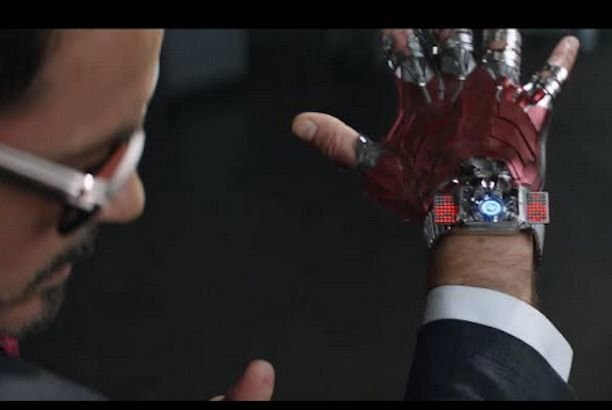 "In Ironman (2008) Obadiah struggles to make an arc reactor small enough to fit his armor. In Captain America: Civil War (2016) we can see a small arc reactor in Tony's wristwatch showing how far Tony developed his technology."

Who else wants Iron Man back? Come on — Doctor Strange can do it, haha. 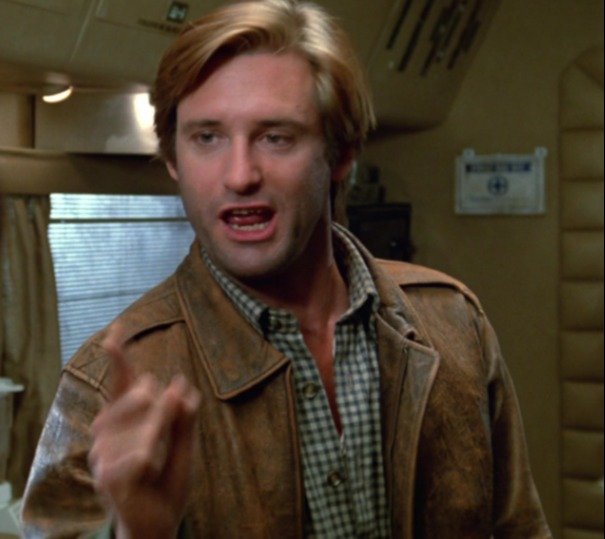 "Before making Spaceballs, Mel Brooks asked for George Lucas's permission to parody Star Wars. Lucas was fine with it and said the only condition was Lone Star didn't dress like Han Solo. As a result, Lone Star was dressed reminiscent of Indiana Jones instead."

Okay, I am yet to watch Spaceballs, lol. 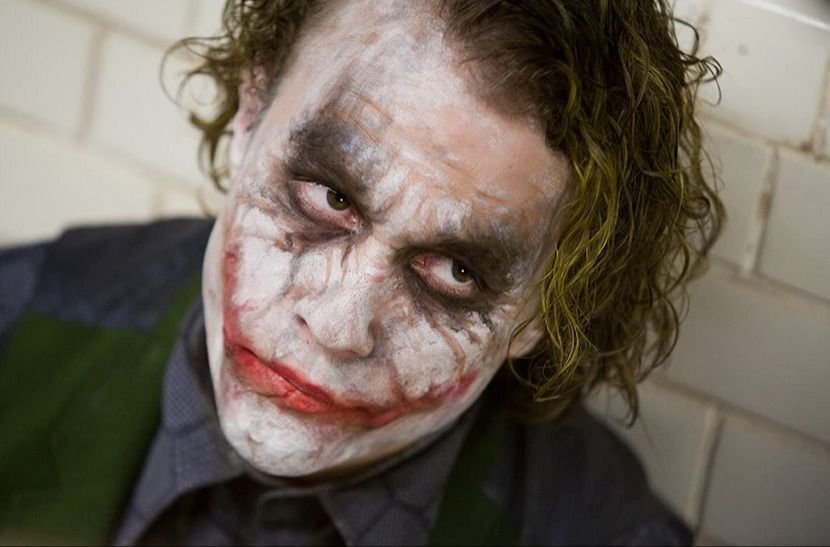 "In The Dark Knight (2008), Joker is constantly licking his lips. This is actually because of the prosthetic scars that Heath Ledger wore. They kept falling off, so Heath would lick his lips to keep them in place. Gradually, it became a part of the Joker’s character."

Wow, I had no idea and now this is quite the iconic part of the character, huh? 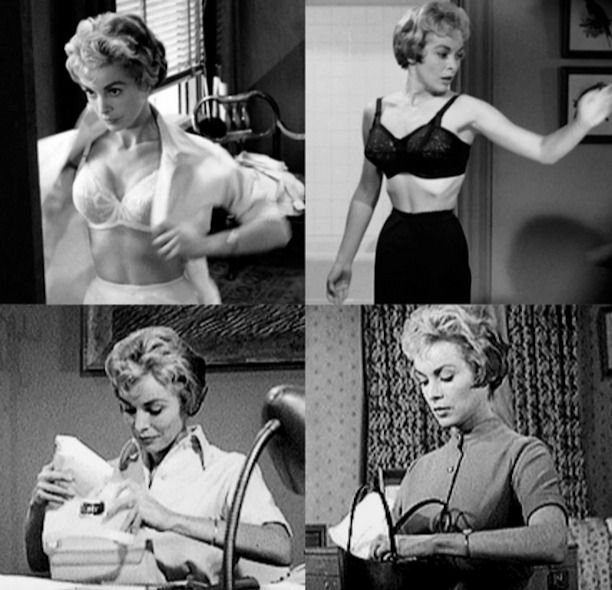 The final film in the Harry Potter series saw the destruction of Voldemort. Eagle-eyed viewers might have noticed that with each destroyed horcrux, Voldemort's robes faded throughout the movie to represent his powers weakening. 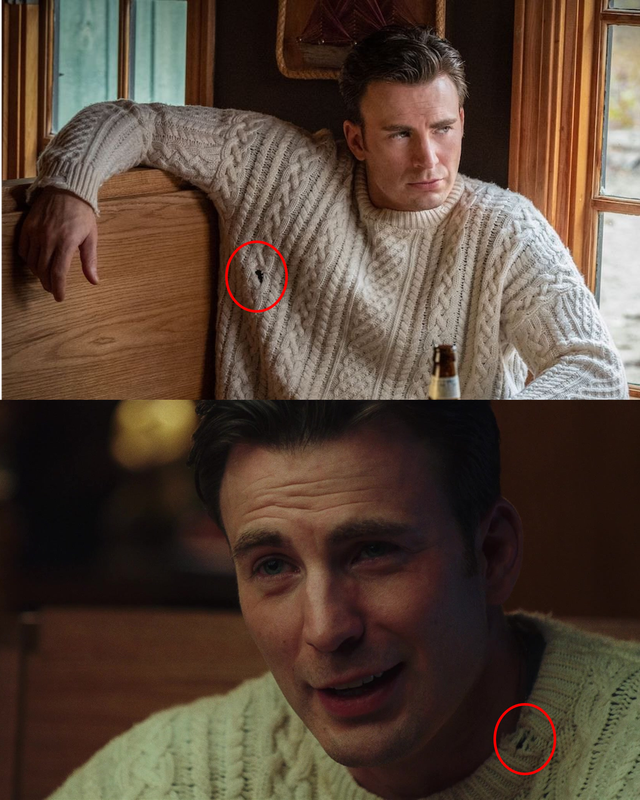 As it turns out, Ransom's ripped sweater in Knives Out wasn't just a fashion statement. Costume designers added the rips on purpose to reflect Ransom's nonchalant attitude and carelessness towards his family. 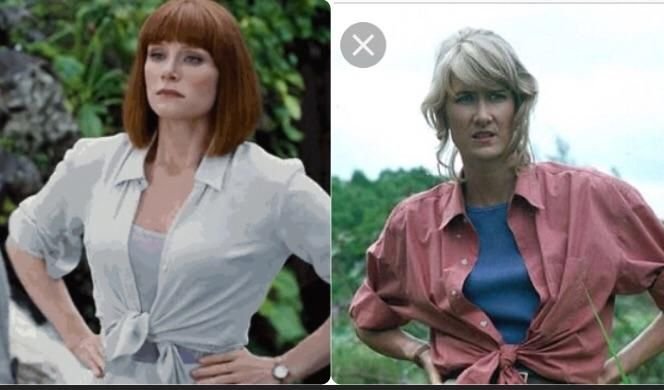 As a subtle nod to the original Jurassic Park cast, Clarie rolls up her sleeves and ties her shirt in the same way Dr. Ellie Sattler did. The two characters will finally meet in 2022's Jurassic World Dominion.

"The Lord Of The Rings"

After the death of Boromir in The Fellowship Of The Rings, Aragorn wears his bracers as a way to honor him. The bracers become part of Aragorn's costume for the rest of the trilogy.

"Pirates Of The Caribbean: The Curse of the Black Pearl"

"In POTC: The Curse of the Black Pearl (2003), most of Jack Sparrow’s hats are made of rubber. This is because Johnny Depp kept losing them and throwing them overboard. After he lost ten leather hats, the costume designer started making them out of rubber so that they would float instead of sink."

Ha, ha, is that right? That's hilarious. That Johnny, huh? 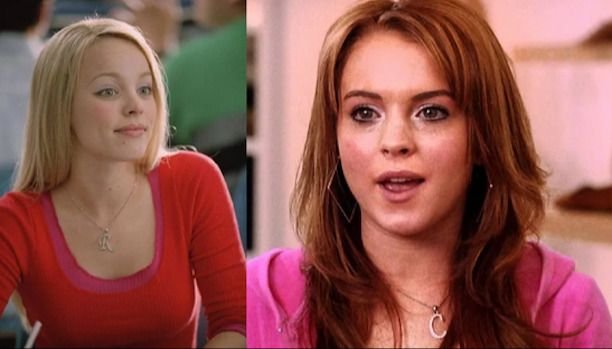 "In Mean Girls (2004), queen bee Regina wears an 'R' necklace around her neck. Cady begins wearing a 'C' necklace once she has humiliated Regina and taken her place."

Aha! Even though I was an extra on the set of this movie, I didn't even notice that.

I absolutely love all these movie wardrobe secrets here. I have to admit I didn't know about most of them. How about you? Did any of these hidden facts surprise you? Have you discovered something cool about one of your favorite movies?