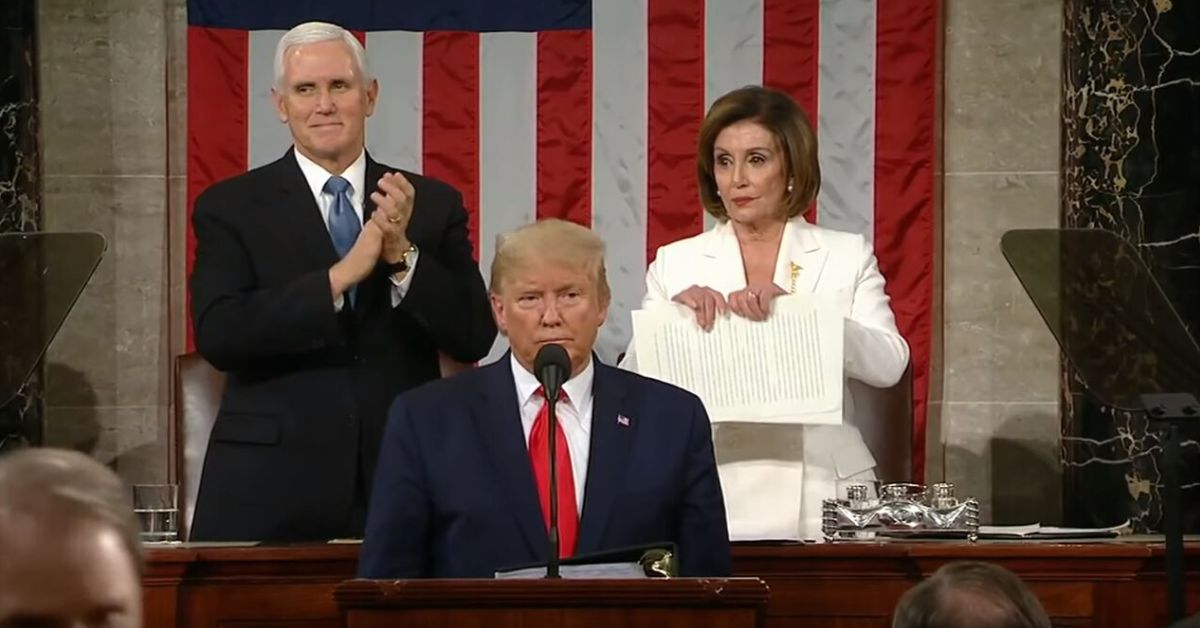 Just moments after Donald Trump finished delivering his State of the Union Address on Tuesday night, House Speaker Nancy Pelosi picked up her own copy of the speech and promptly tore it two, leaving little doubt as to her feelings towards the President and what he has to say.

Tensions were obviously high at the event, which took place on the eve of the Senate's expected acquittal of Trump in his impeachment trial. Before the speech, a spokesperson for Pelosi told CNN that the two have not spoken since October, when Trump insulted Pelosi and called her a "third-grade politician" during a meeting that was supposed to be about Syria.

Days before the speech, Trump told Fox News he will likely have a tough time working with Democrats after his expected acquittal:

After Trump finished his speech on Tuesday night, the crowd stood to applaud him, but Pelosi was clearly in no mood to clap.

Standing behind Trump and in full view of both the audience and press cameras, the speaker picked up her copy of Trump's address and ripped the pages in half.

If Trump was aware of what was going on behind his own back, he didn't let it show as he left the podium. But everyone else certainly took notice.

Republican Sen. Ted Cruz blasted Pelosi's actions on Twitter where he wrote that both she and Democrats "displayed their contempt for millions of hardworking people across the country."

"Nancy Pelosi once again the flag bearer for a party that has NO respect for the office of the Presidency/NO sense of what it really means to be an American," Republican congressional candidate Ronny Jackson tweeted. "Embarrassed and scared for our country."

Although the paper tearing upset Republicans, other people online have praised Pelosi and turned her into a viral meme.

One user shared a clip of the poignant moment from Tuesday night's address and wrote, "Me ripping up the study guide after failing the test."

Another quipped, "Nice try Nancy, but you need to take that speech to Mount Doom and cast it into the fires of Orodruin."

On Wednesday, he tweeted to thank his supporters for the "nice remarks and wonderful reviews" of his address, adding, "It was my great honor to have done it."

He has, however, retweeted dozens of tweets condemning Pelosi, including this one, which reads, "Nancy's legacy is ripping up a document she is mandated to preserve. She's a complete failure."

Pelosi has since tweeted about Trump's speech, and possibly shed some light on why exactly she chose to tear it up.

In her tweet, she branded the address a "manifesto of mistruths," adding that it should act as a "call to action for everyone who expects truth from the President and policies worthy of his office and the American people."

And if that weren't clear enough, Pelosi actually spoke to reporters after the address where she said she chose to rip up the speech "because it was the courteous thing to do, considering the alternatives."

Pelosi's poignant paper shredding wasn't the only frosty moment from the evening, as Trump earlier appeared to snub the speaker's handshake.

As CNN reported, Pelosi extended her hand to the president before he delivered his speech, but he appeared to reject her handshake as he took his place at the podium.

In response to his apparent snub, Pelosi can be seen smiling and shrugging her shoulders, seemingly amused and unsurprised.