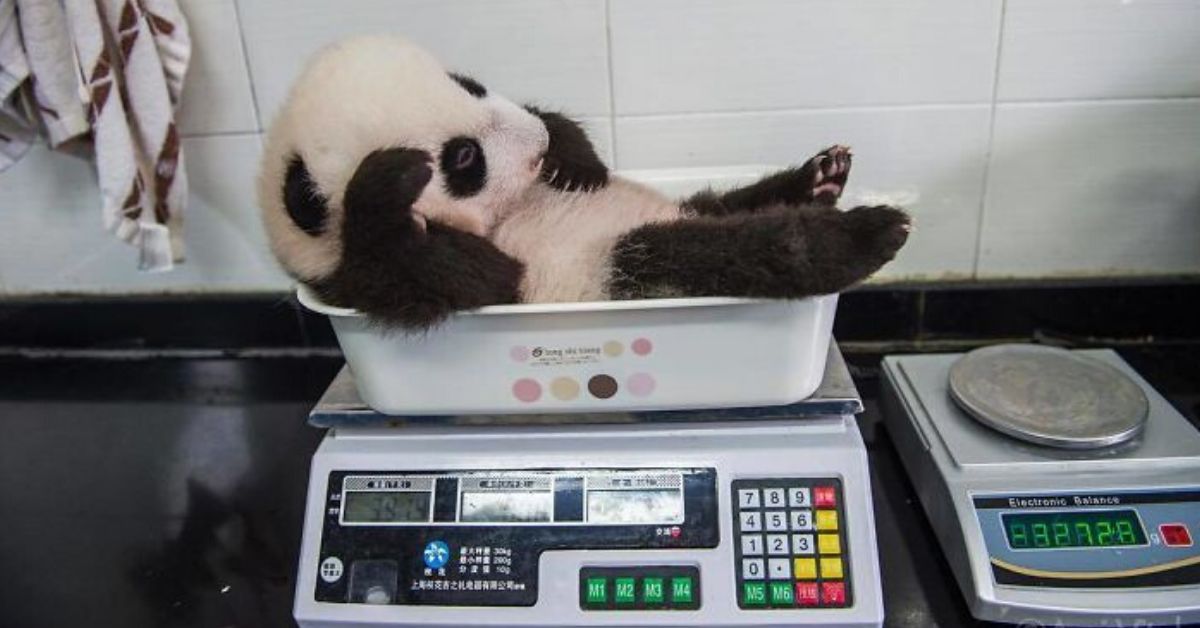 If you're anything like me, you haven't really put much thought into how someone might determine the weight of a single animal. In fact, I never actually considered it before today.

But animals, particularly those in captivity, have to be weighed regularly to monitor their health and their growth. And it's certainly not as easy as asking a seal to hop up on a scale for a quick second.

In fact, animal care workers have to get pretty clever when it comes to finding out how much a creature weighs. Some of the tricks they use are super creative while others are just downright adorable. Check them out below! 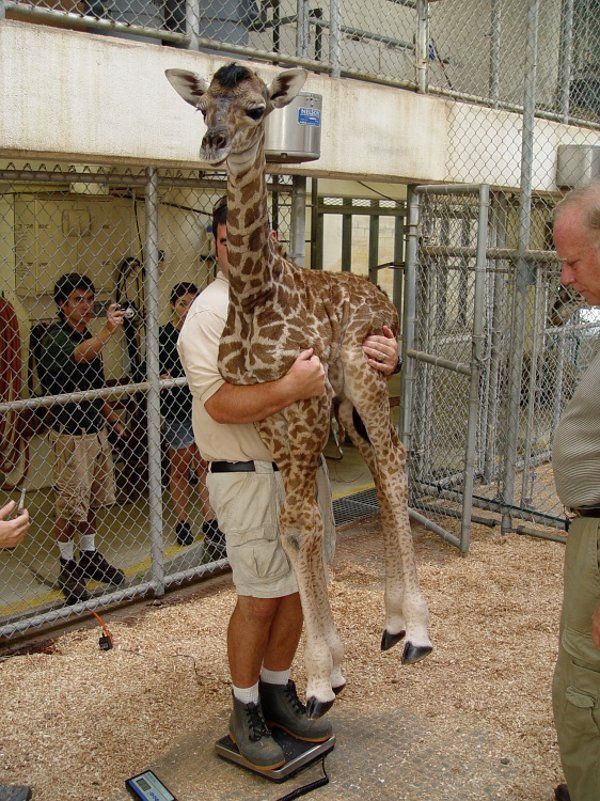 This baby giraffe got a little boost for its weigh-in. I especially like now nonchalant this fella looks. Clearly this approach isn't new to him, and clearly he doesn't mind being lifted up.

Of course, if the numbers seen a little off, an argument might ensue as to who exactly gained the weight. 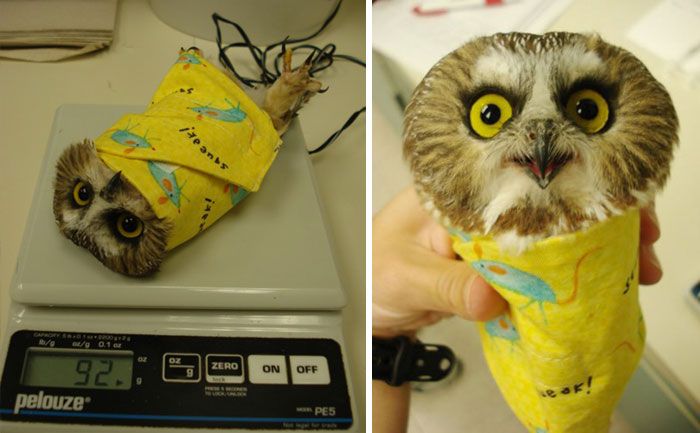 This lil' owly was wrapped in a towely for his weigh-in, which, according to The Raptor Center, was in an effort to prevent unhelpful wiggling during the process. 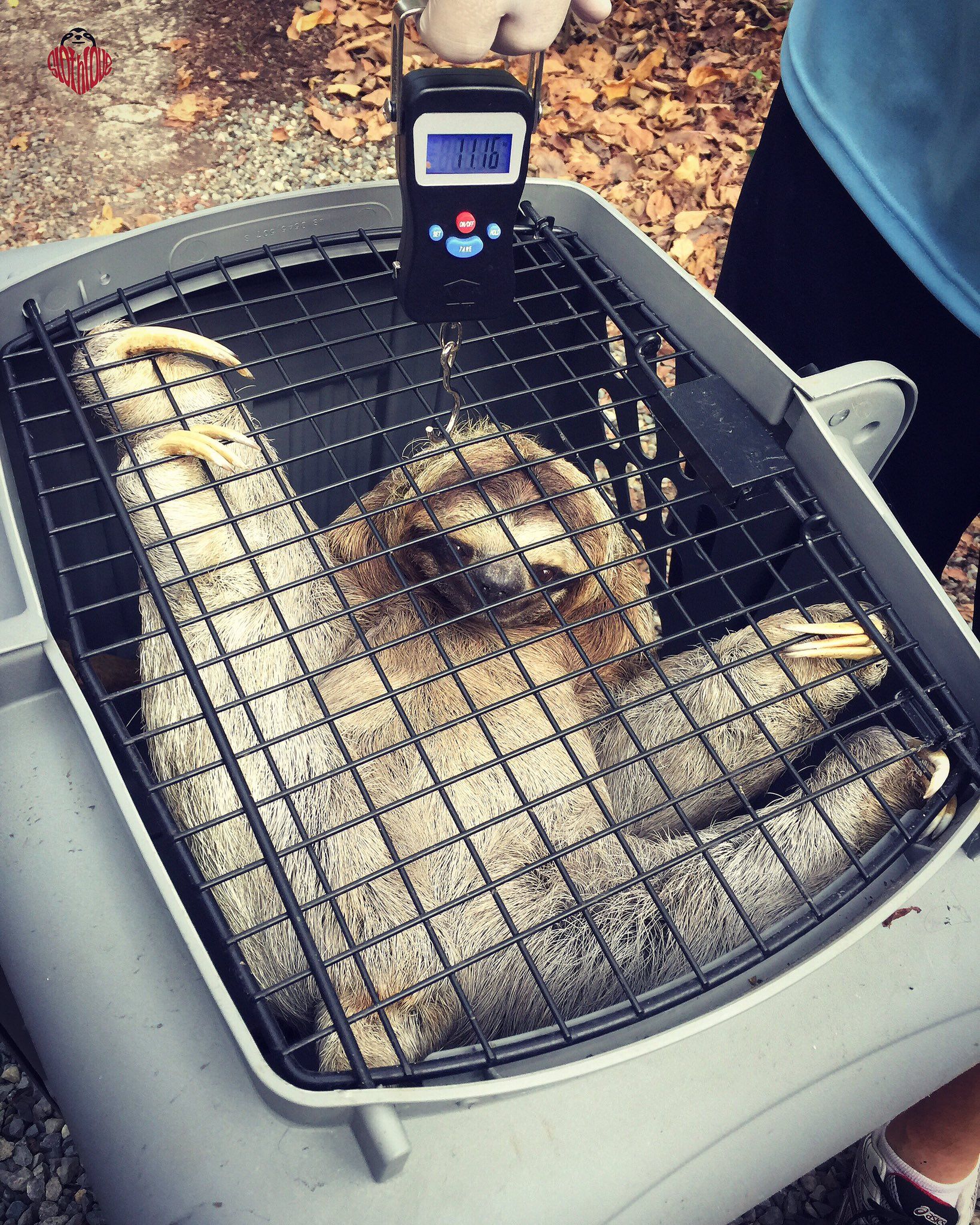 Apparently the best way to determine this sloth's weight was to weigh the whole crate and then do some math to get the right number.

Luckily, just like the giraffe we saw before, this slow-moving gent seems pretty unbothered by the whole thing. 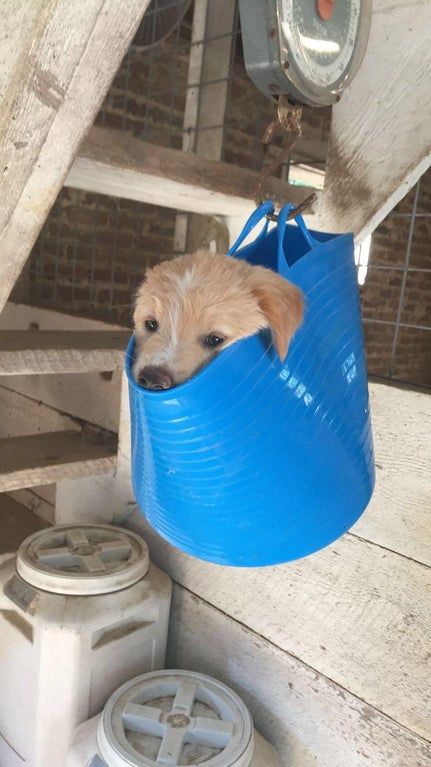 Okay, tell me this isn't the cutest gosh-darn thing you've seen all day.

In order to weigh this little guy, he was placed inside a bucket attached to a hanging scale, but I don't even need to see the number to say with absolute certainty that this pup is perfect. 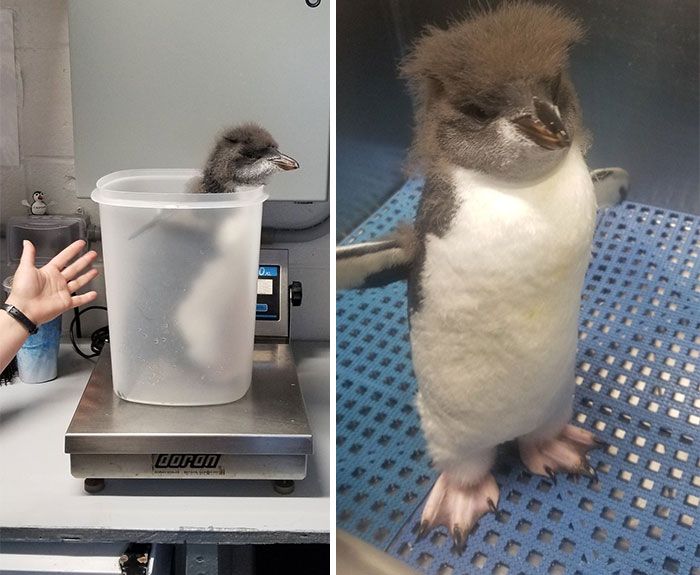 This is a baby rockhopper penguin who was placed inside a bucket for his weigh-in. 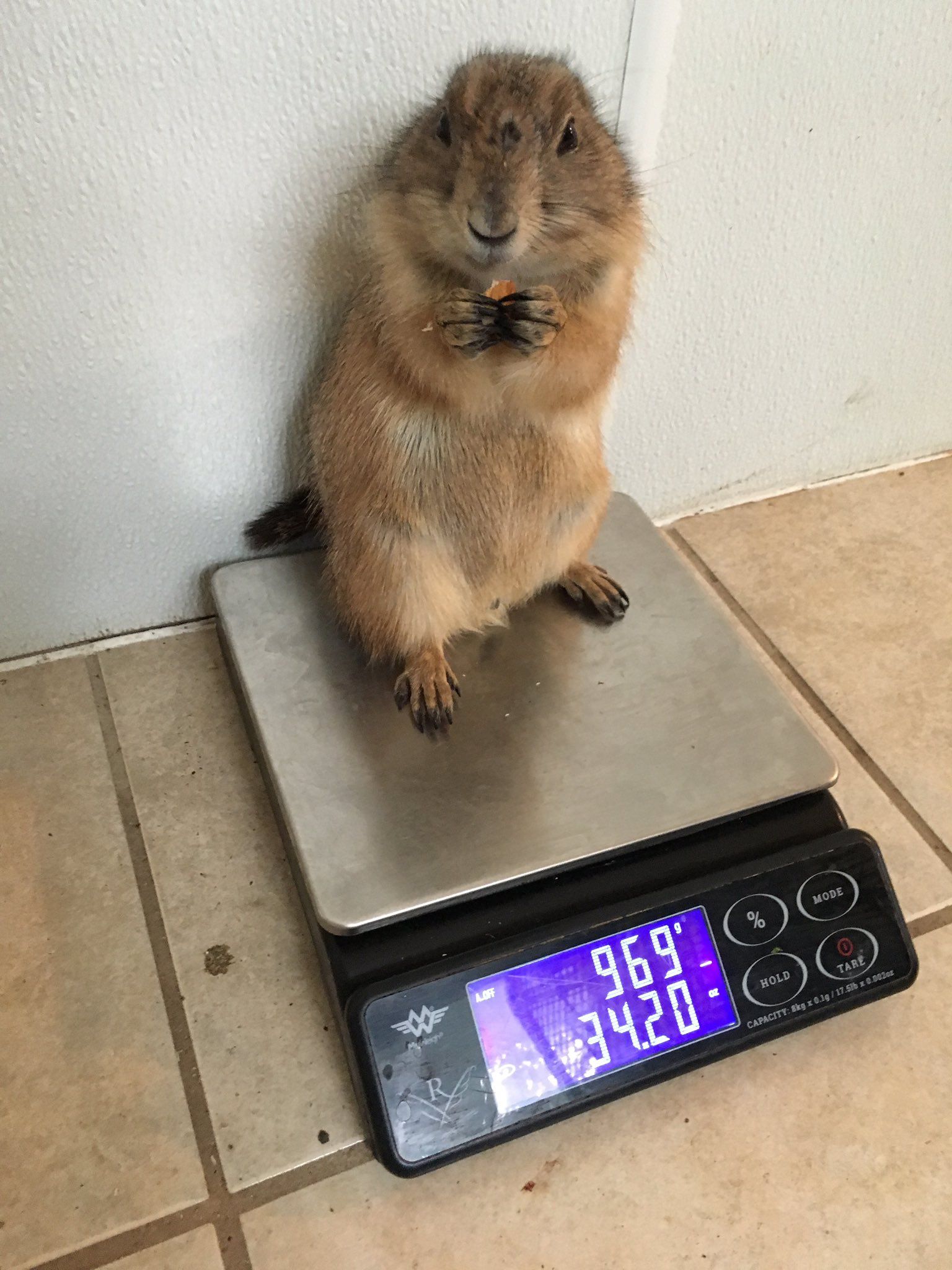 Well, according to this zookeeper it's as easy as luring him up onto the scale with a walnut.

Personally, I'm not sure I'd enjoy being weighed while I'm snacking but whatever works. 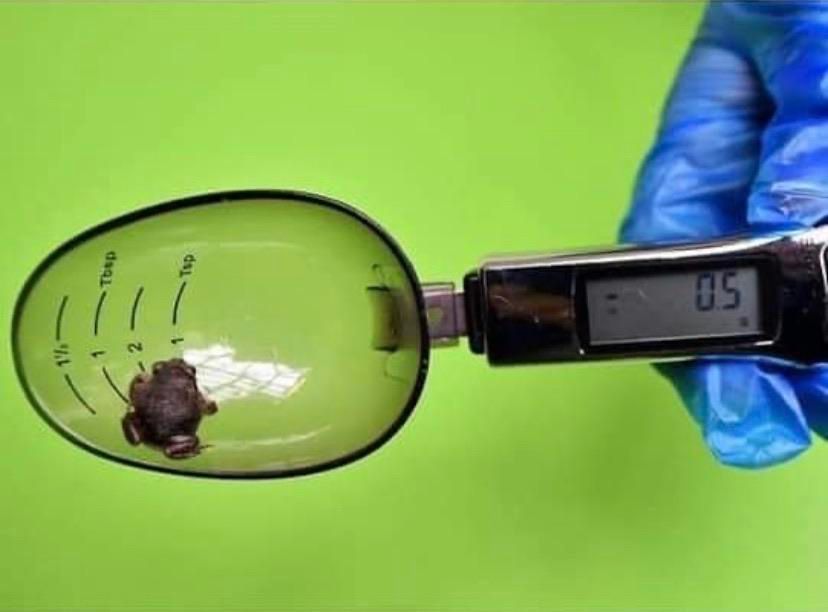 This little guy is so smol that workers had to use a special spoon just to measure him.

From far away, he could be a chocolate chip! 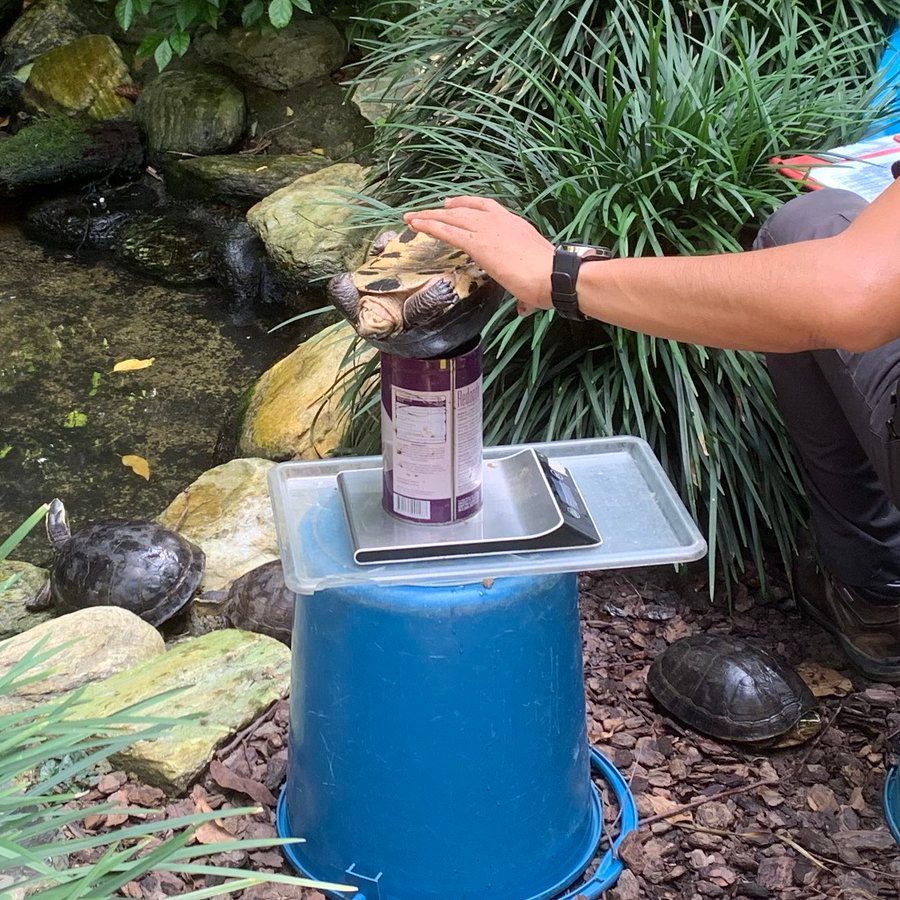 Now, I'm no animal expert or anything, but I have a few questions about this method of weighing turtles by turning them upside down atop a can. 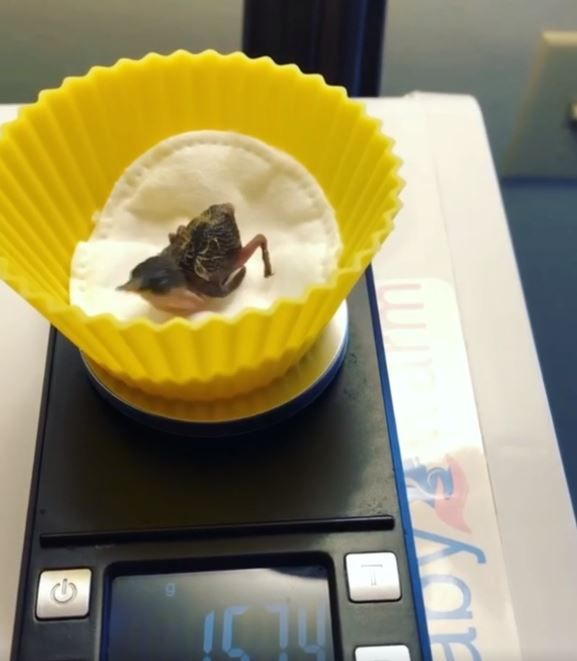 And that's a baby hummingbird inside of it. This photo is actually pulled from a video which, if you watch it, proves that even as newborns, these fast-paced birds are always moving around.

Blink and you'll miss him! 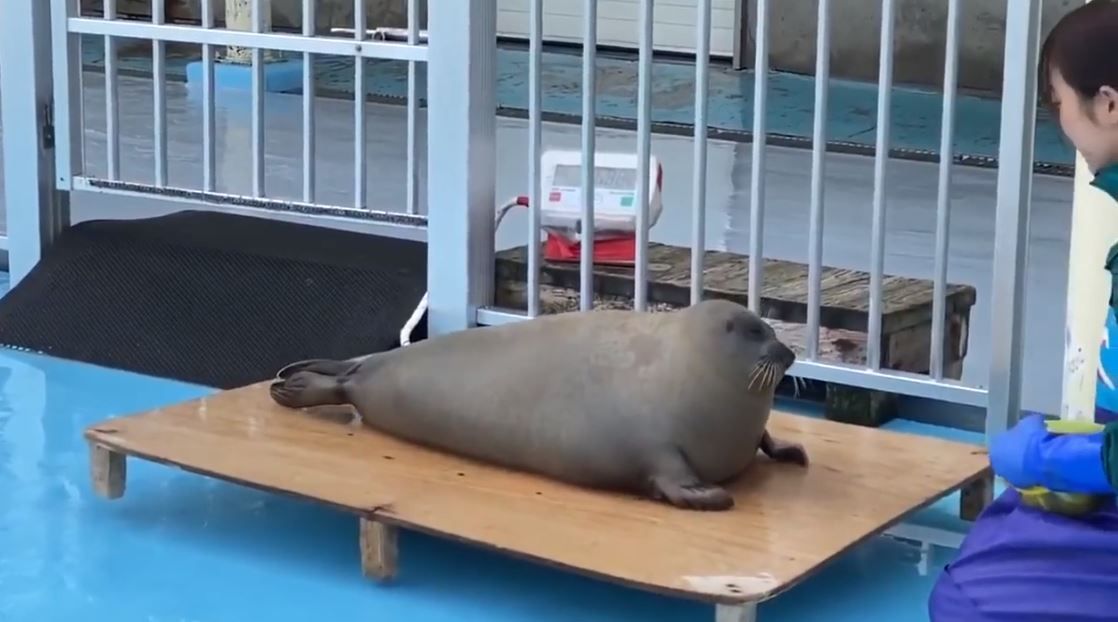 I swear this little guy has a neck but for some reason when it came time for a weigh-in, that neck was absolutely nowhere to be seen.

Maybe it was just a bit too much work heaving that body up onto the platform and his neck simply disappeared from all the effort. Who knows? 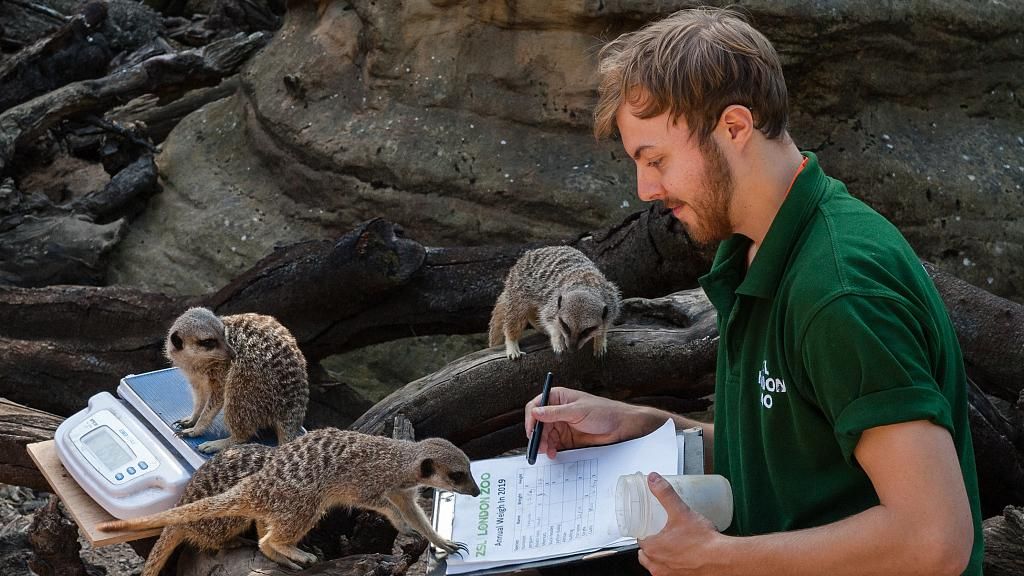 These meerkats are very interested in what their weight is, and thankfully this worker at London Zoo was more than happy to share the numbers with them.

12. Treats first, please and thank you. 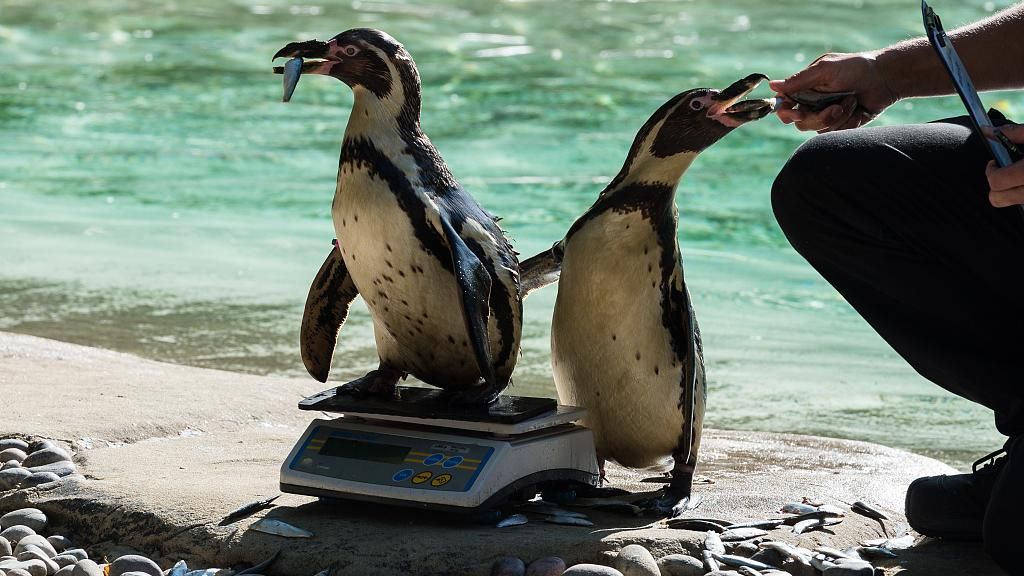 Much like the prairie dog we discussed before, these penguins at the London Zoo weren't about to climb up on that scale without some sort of incentive.

And a fishy treat will do quite nicely. 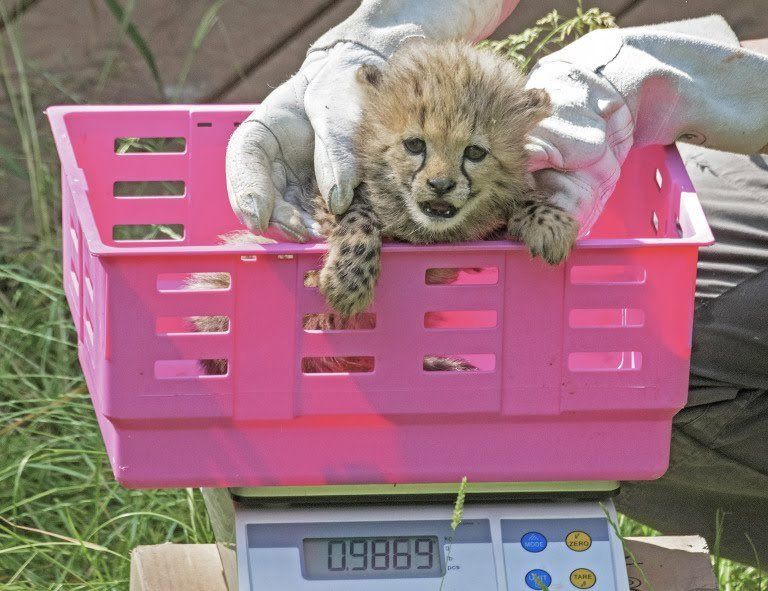 This baby cheetah certainly doesn't seem too keen on spending any second inside that basket, but I'm sure the weigh-in only lasted a moment before it was off playing with its siblings again.

Well, I guess that's one way to weight a duckling. And we've also just discovered another use for red solo cups. Nice! 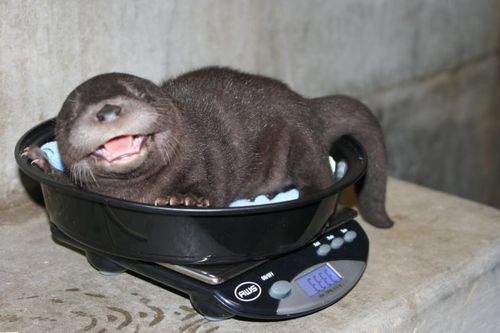 This baby river otter just might be the happiest animal we've seen today, and I must say that smile is super infectious! I can't look at that picture without grinning and aww-ing. 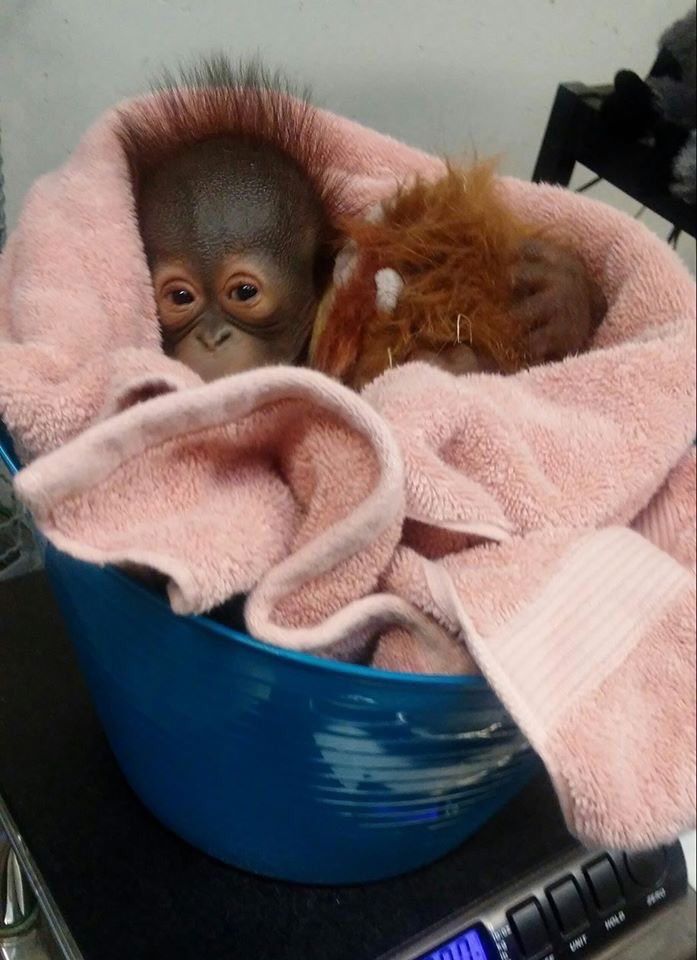 To get this baby orangutan properly weighed, it was placed inside a sufficiently cozy basket where it could cuddle up in a bed of absolute bliss and softness. 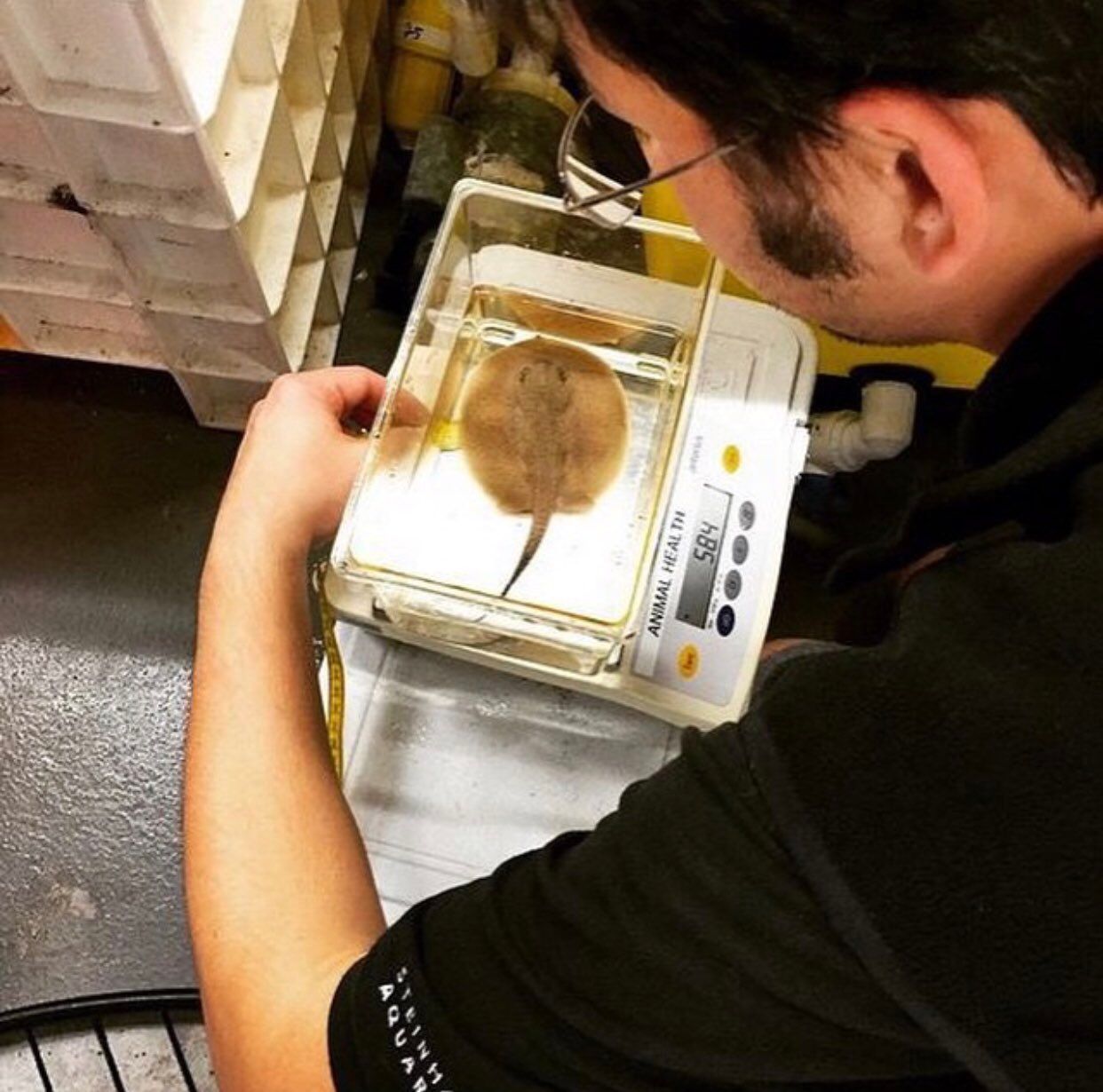 No, it's not a tragically flattened hamster. In fact, it's a baby stingray and it's in the process of being weighed!

18. Chilling out, maxing, relaxing all cool. 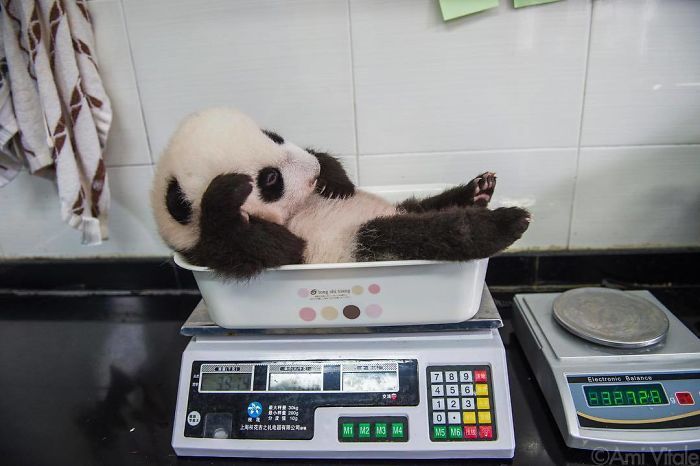 Clearly this baby panda has absolutely no problem whatsoever being placed in a bucket on top of a scale. In fact, I'd say it looks quite content with its new lounger! 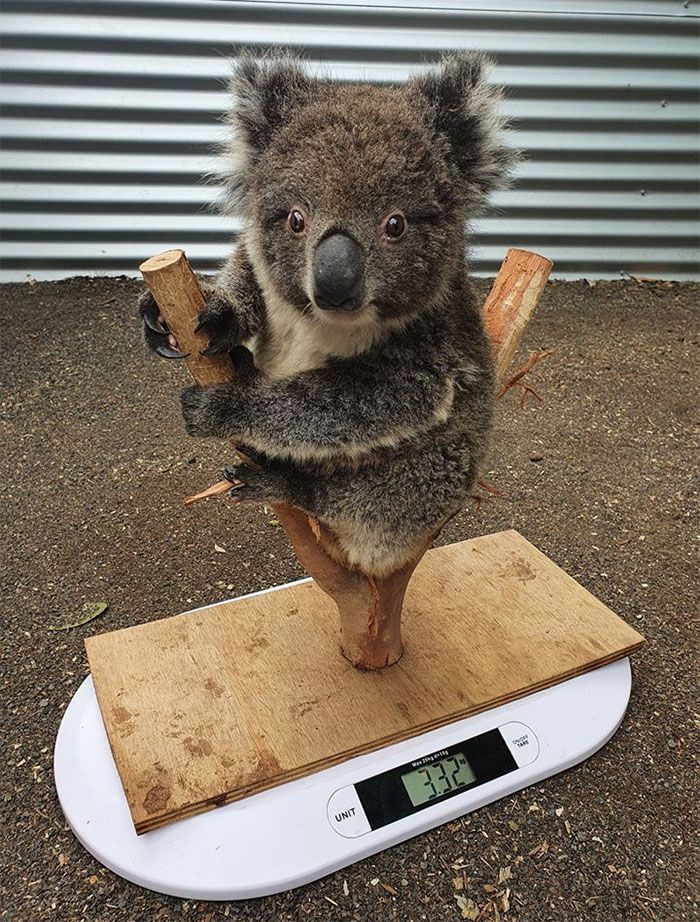 Staff at Kangaroo Island Koala and Wildlife Rescue Centre got the perfect reading of this little cutie's body weight by fixing a mini tree of sorts to the scale for the koala to hang onto. 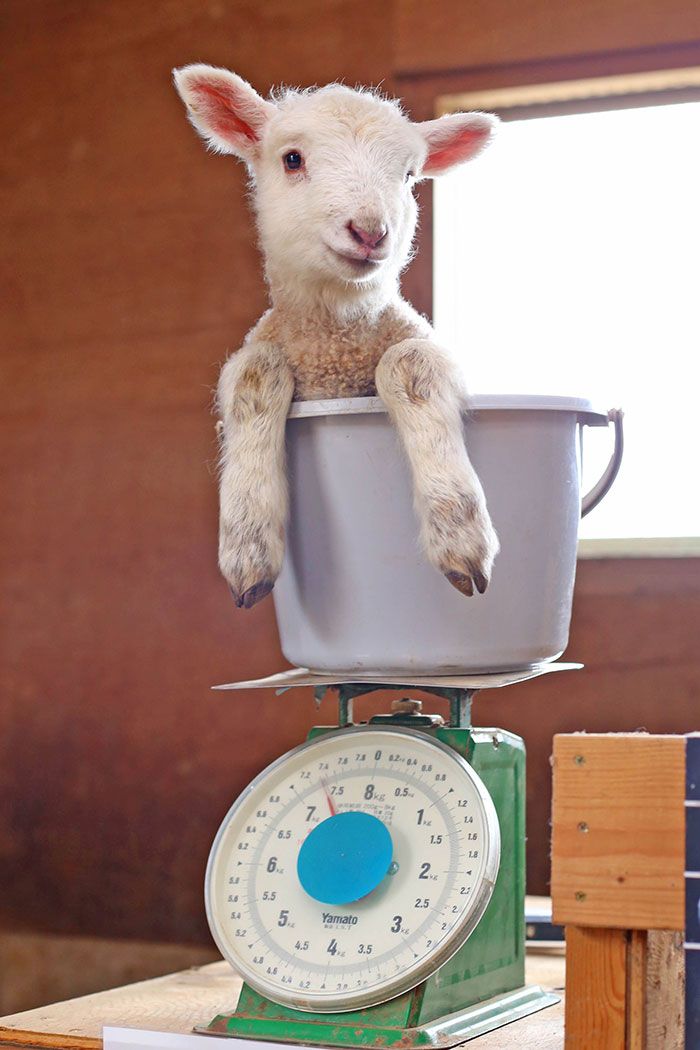 This little lamb actually looks rather cheeky. Maybe he's got a secret. Or maybe he just really enjoys all the attention he's getting, just from being weighed.