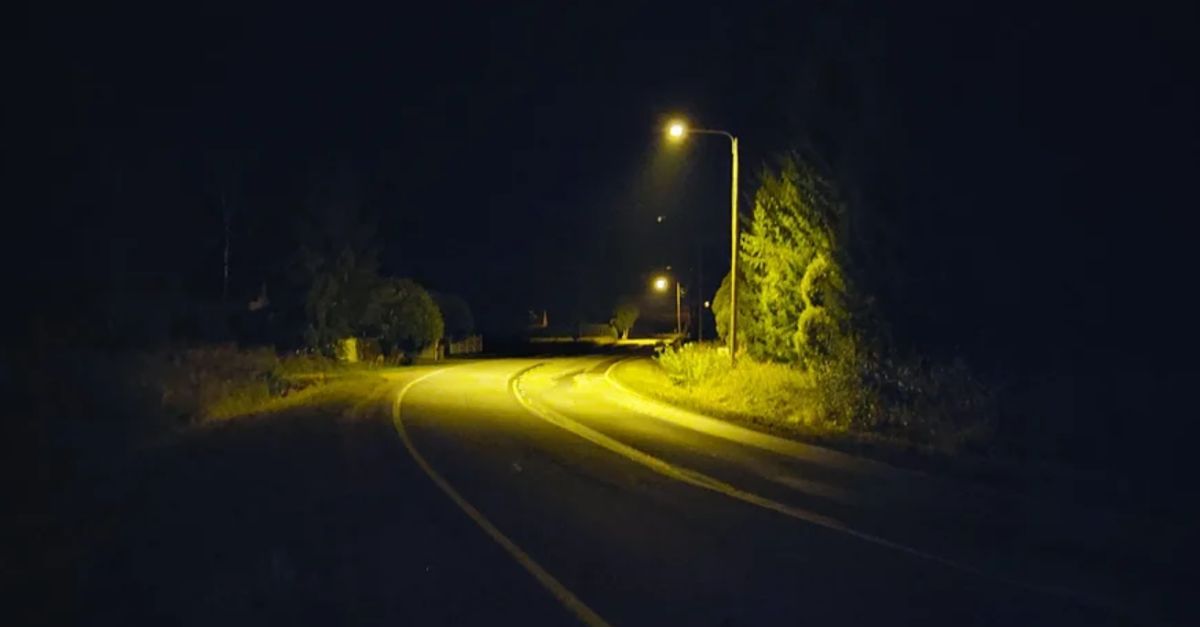 16+ Intense Pics That Creeped Us Out Super Hard

We tend to want our spooky stuff the most during Halloween but that's not to say it's the only time we can whet our taste for the macabre.

After all, you're likely to see just as many horror movies in January as you are in October. Granted, that's largely because horror movies are cheap to make and January has historically been the culture industry's dumping ground. Still, they wouldn't keep doing it if it didn't work.

And while we may have a lot to be scared about nowadays, there's an important difference between something that scares our imagination and that legitimately stresses us out.

So it's time to balance that out and bring ourselves back to the days when we thought there were monsters under our beds.

1. It's apparently not so unusual to find strange statues outside of pagodas in Cambodia but this one seems to take the cake. 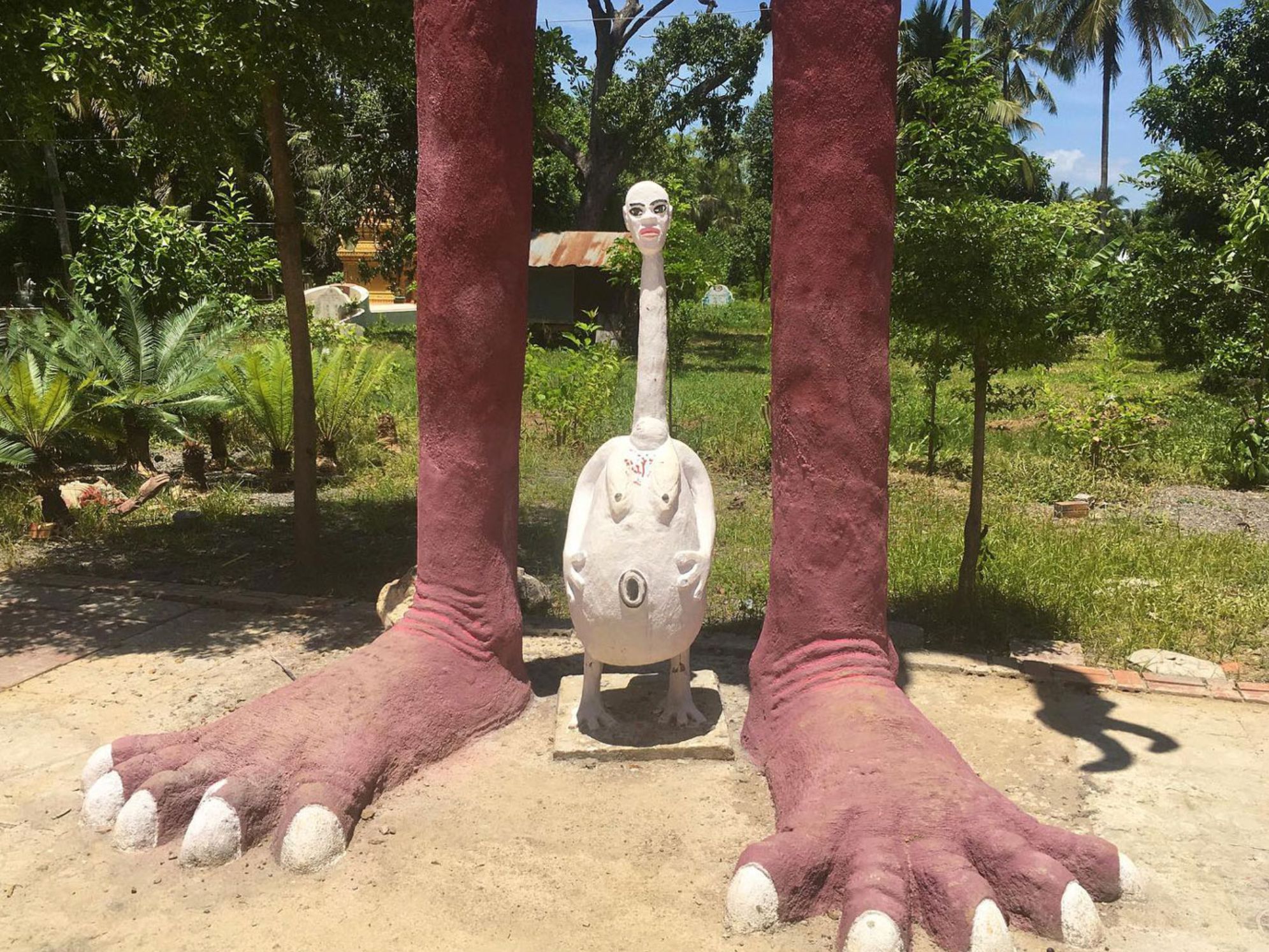 Although the uploader lives in Cambodia, they're just as stumped when it comes to the story behind this weird chicken man with the giant buddy as we are.

2. While it's fairly common for hunters to hang animal skulls so nature can eat away at everything besides the bones, this seems to be something different. 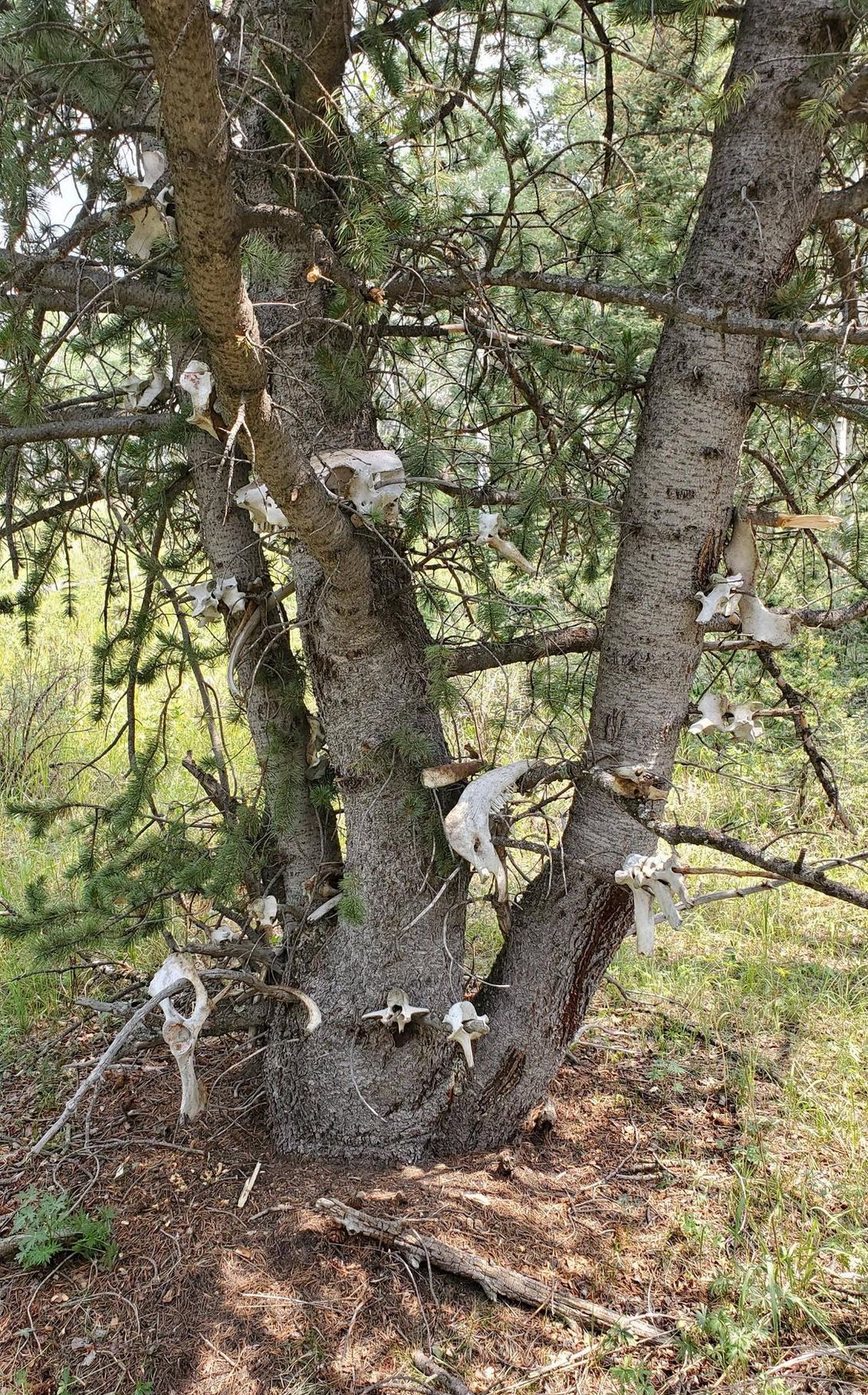 For one thing, those hunters usually stick to skulls and don't just hang random bones from a tree. For another, they usually don't do this with so many of them.

So the only explanations I can think of now are either cult activity or extremely edgy prankster and I don't think I like either option.

3. Yup, nothing drums up business quite like faceless humanoids dangling from the ceiling. 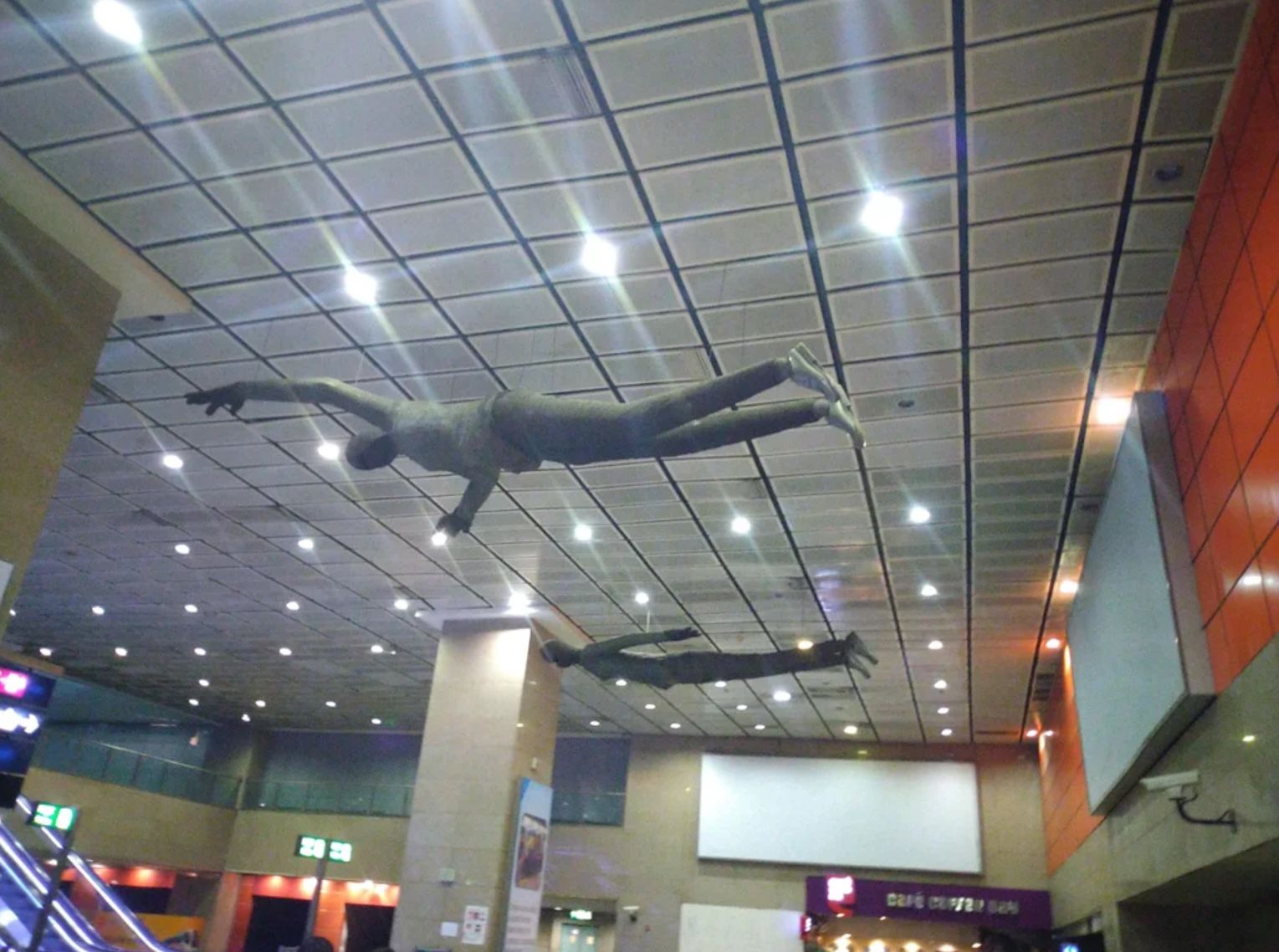 Since this otherwise looks like a fairly normal mall, I can't imagine why these nightmarish decorations seemed like a good idea.

Like, they're not even modelling clothes! What is the point of this?

4. Apparently, even the owner of this device jumps every time they see it in the morning. 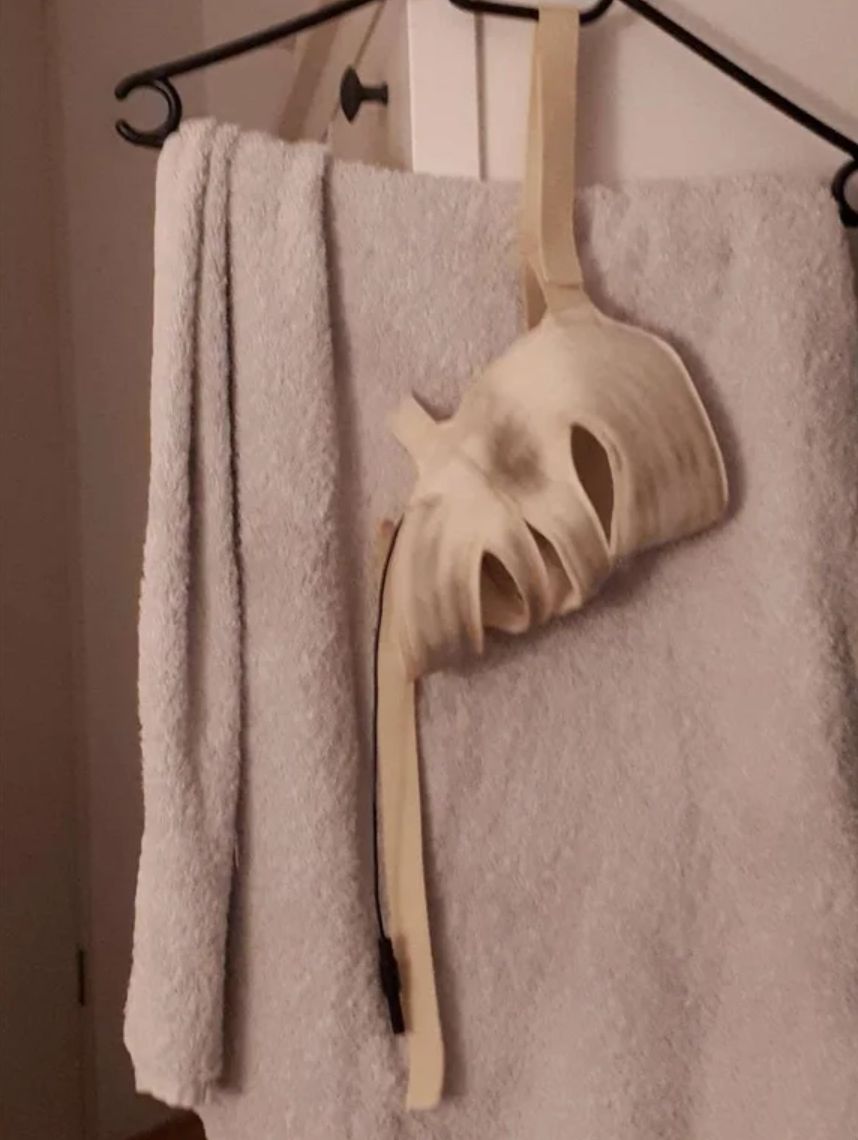 Apparently, this is a Iontophoresis face electrode designed to treat excessive facial sweating.

Considering how it creepy this thing looks, it better work.

5. Under the right circumstances, even the trees can find a way to make us nervous. 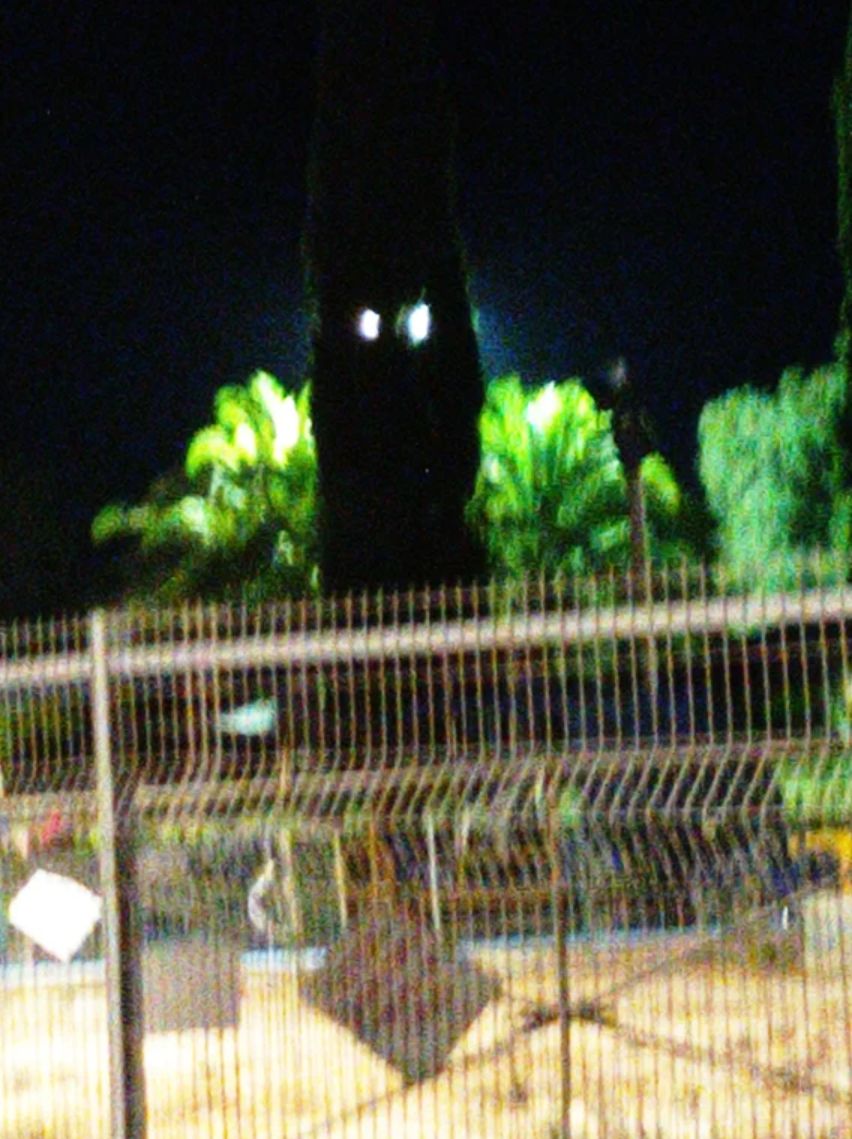 I'm guessing that those lights were installed before this bushy tree grew tall enough to block them because it's kind of in the way.

It's certainly in the way of our comfort, at least.

6. Even fairly innocent old photos can seem like they have a terrible curse on them and this one is a perfect example. 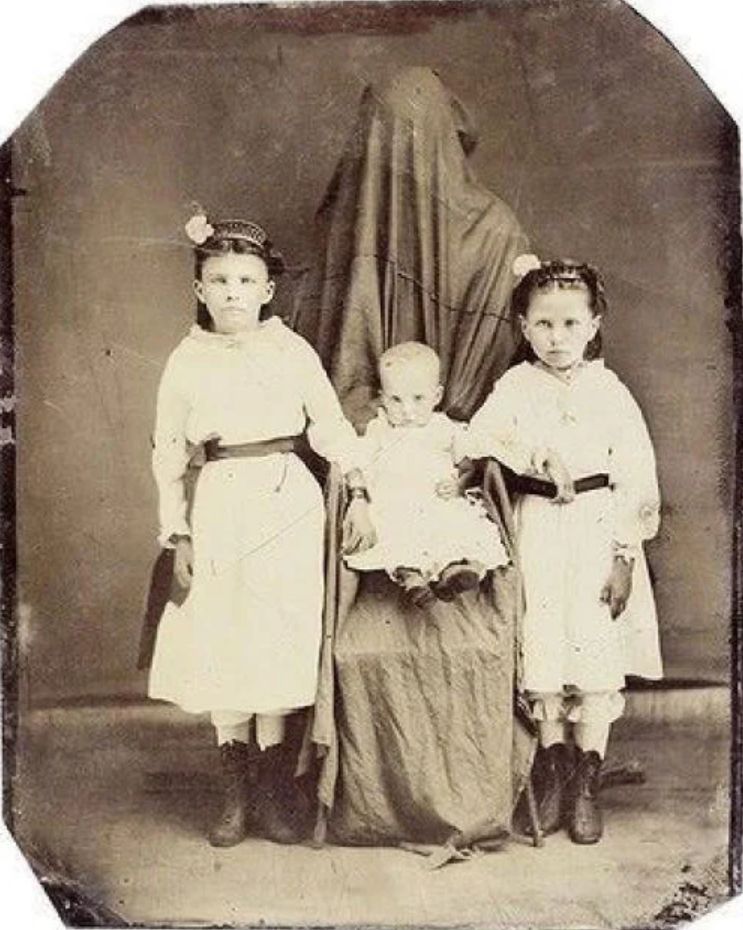 Granted, you may be wondering what could possibly be innocent about someone wearing a sheet over their head while three kids stare daggers into us.

But the fact is that photos took a long time to take back then so it's probably just a parent keeping the baby still without stealing focus from the kids.

7. However, I don't have an explanation for this one and that'll come as very bad news once you see it. 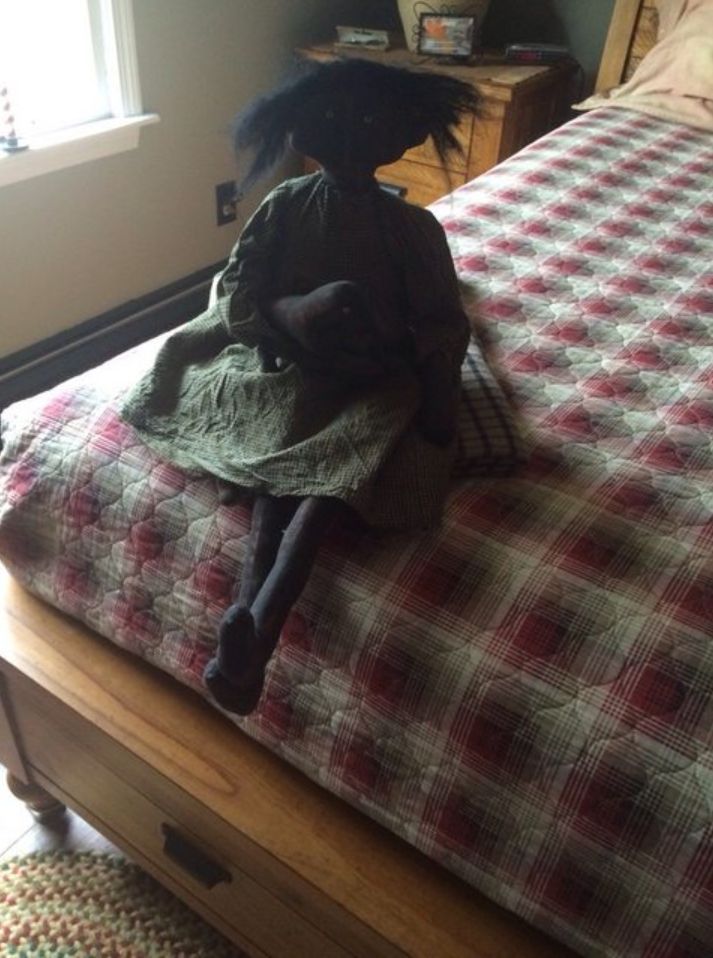 Apparently, the uploader's wife simply found this on her father's bed, which sounds like a scene from about 10 minutes into a horror movie.

So good luck with whatever this is, I guess.

8. This is almost quaint compared to some of the elaborate displays people put on their trucks but I can also see it startling people. 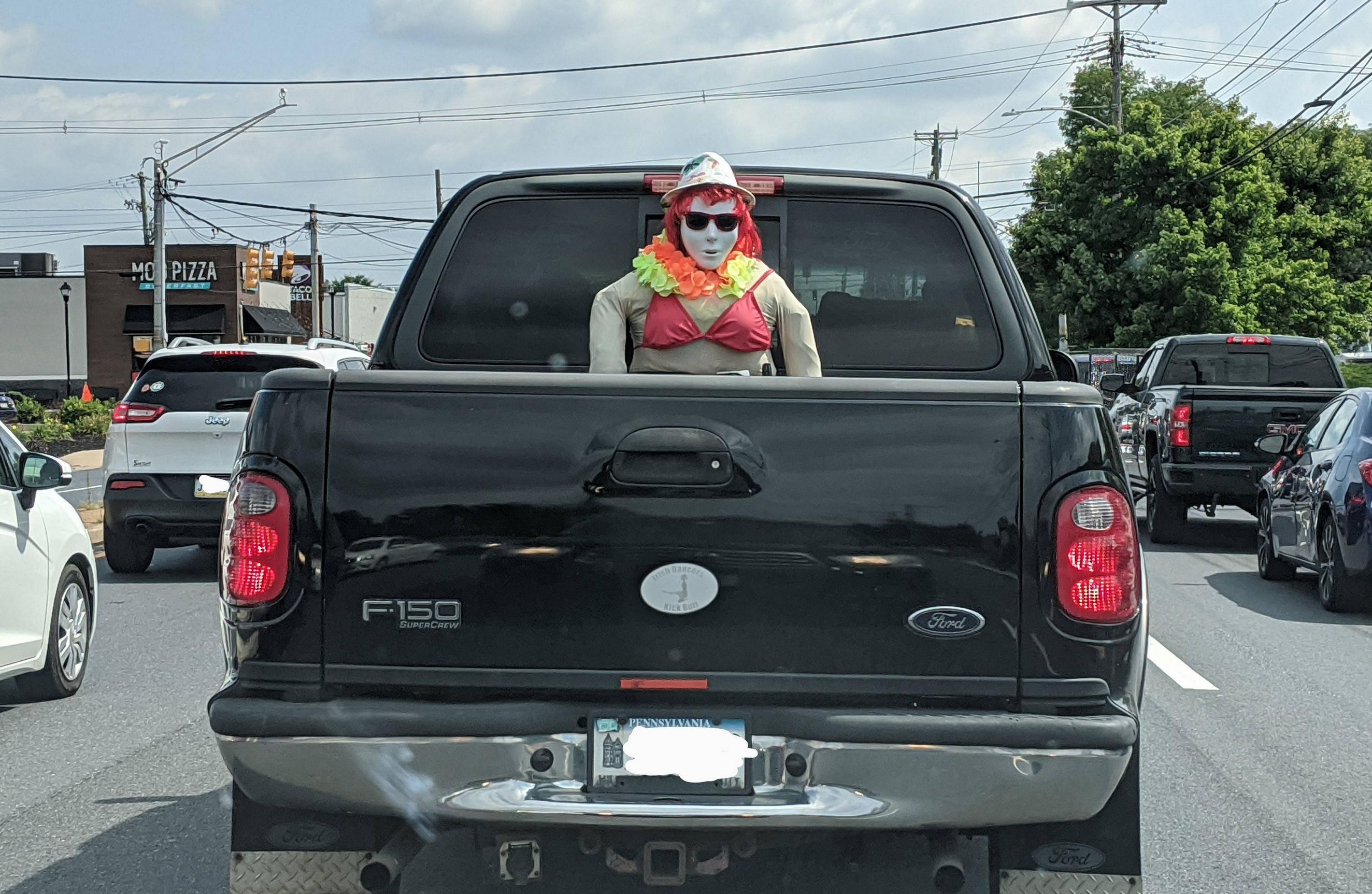 However, it's at least likely to make us laugh a little after it makes us jump, unlike the other things on this list.

9. If these sculptures look particularly horrifying, then it means the artist did their job. 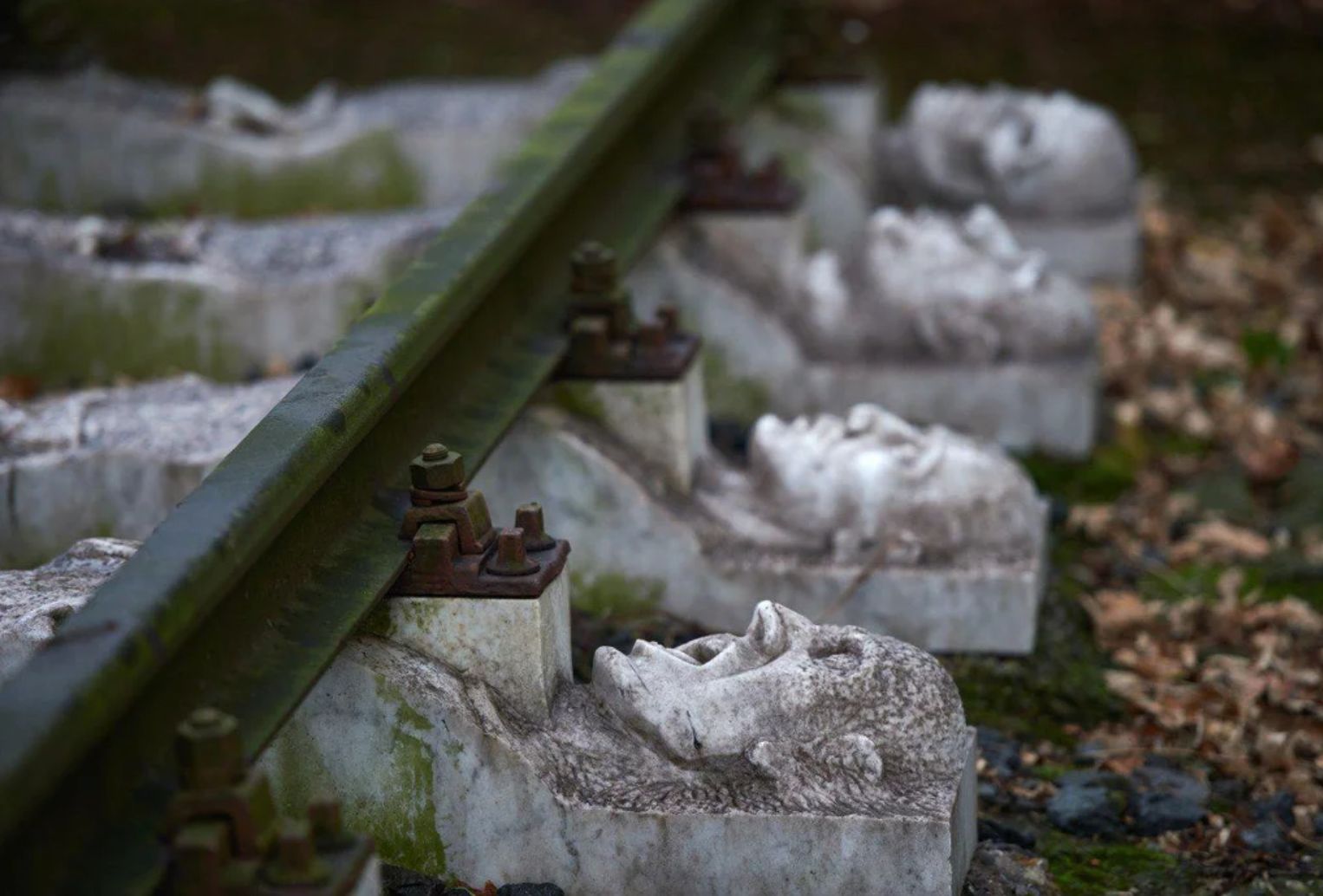 Apparently, this wasn't actually intended to be part of a real railroad. Instead, it's a memorial to Holocaust victims that now rests at the site of the former Buchenwald Concentration Camp near Weimar, Germany.

10. Believe it or not, the woman in this photo likely signed up for this experience. 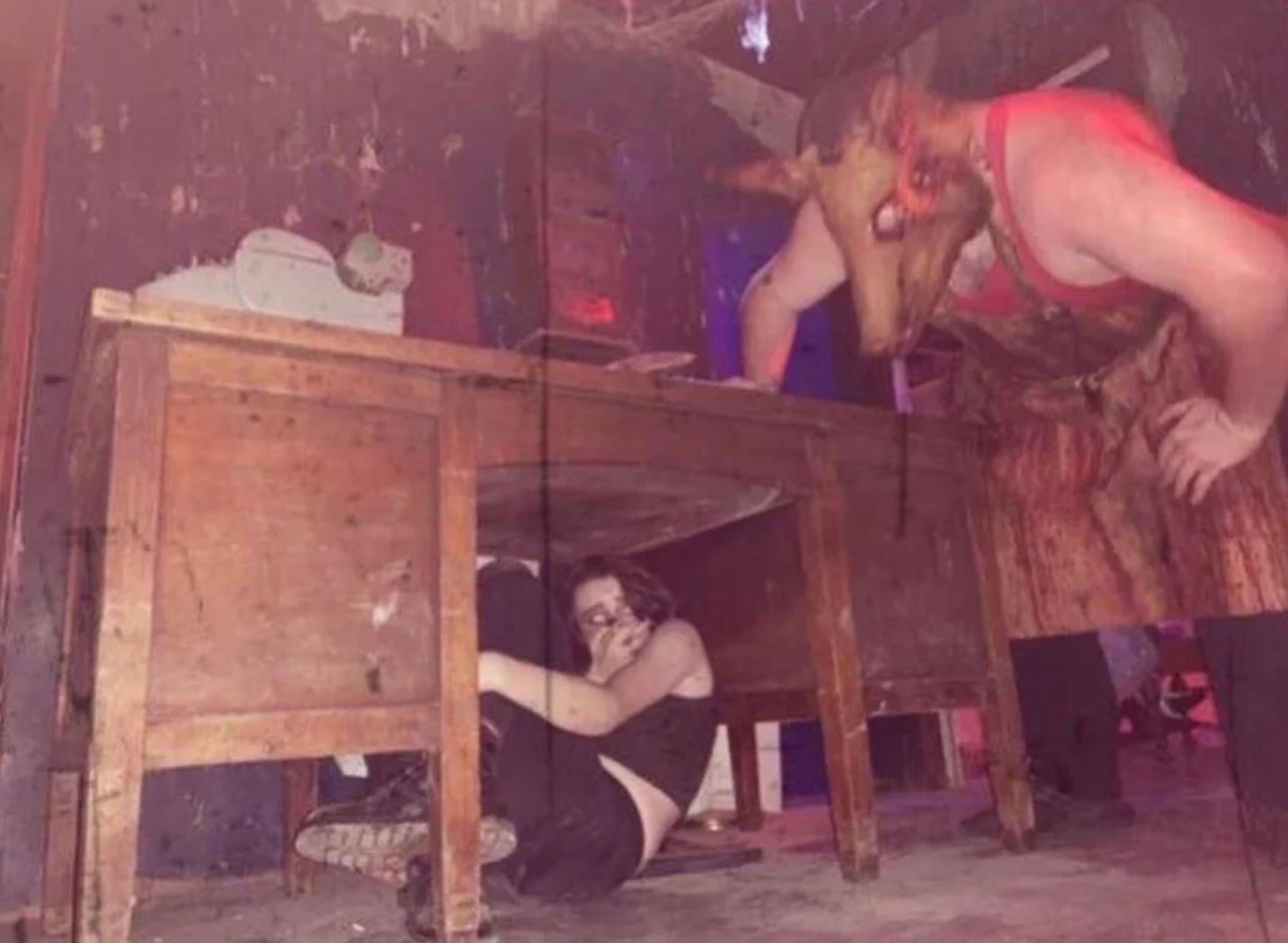 Although it's unclear where exactly this is, it seems to resemble the kinds of frights one can experience at "extreme" haunted houses like the McKamey Manor in Summertown, Tennessee.

While each likely varies in their policies, McKamey is known to have entrants sign a 40-page waiver absolving the organizers of liability in the event of physical or psychological harm.

Even from this photo, it's not hard to see that both are real possibilities.

11. It was legitimately hard to tell whether this was a real kid or a doll at first. 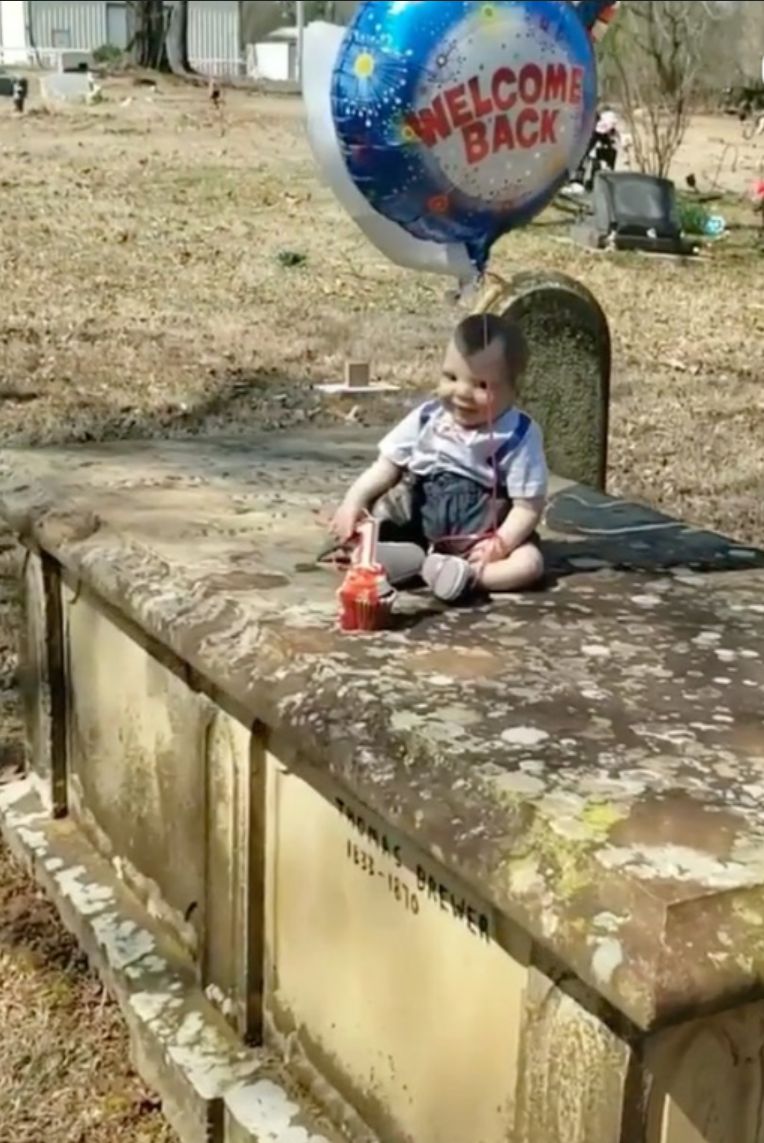 Whether the truth makes you feel better or worse, this is a doll.

I'm just hoping that we're looking at a result of the deceased's sense of humor because I don't want to know why some stranger would put this on their grave.

12. These straw people in traditional clothes are almost charming until you look at their faces. 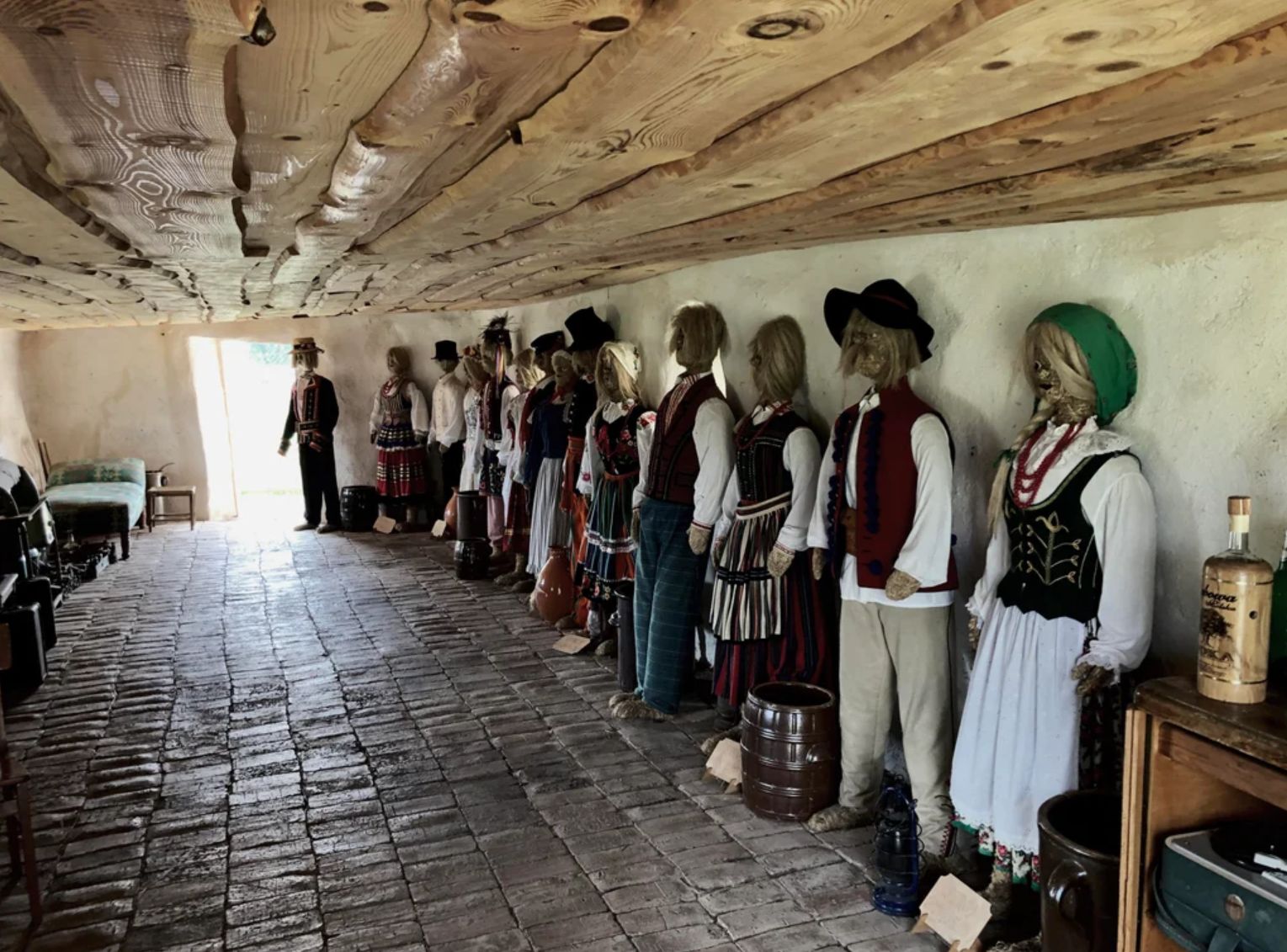 Fortunately, we can't see too many of them in this picture but just imagining what they'd look like if they came to life should kill any curiosity in seeing the rest.

13. OK, one thing that kind of takes away from the horror factor here is that someone clearly made this and put a spooky filter on it. 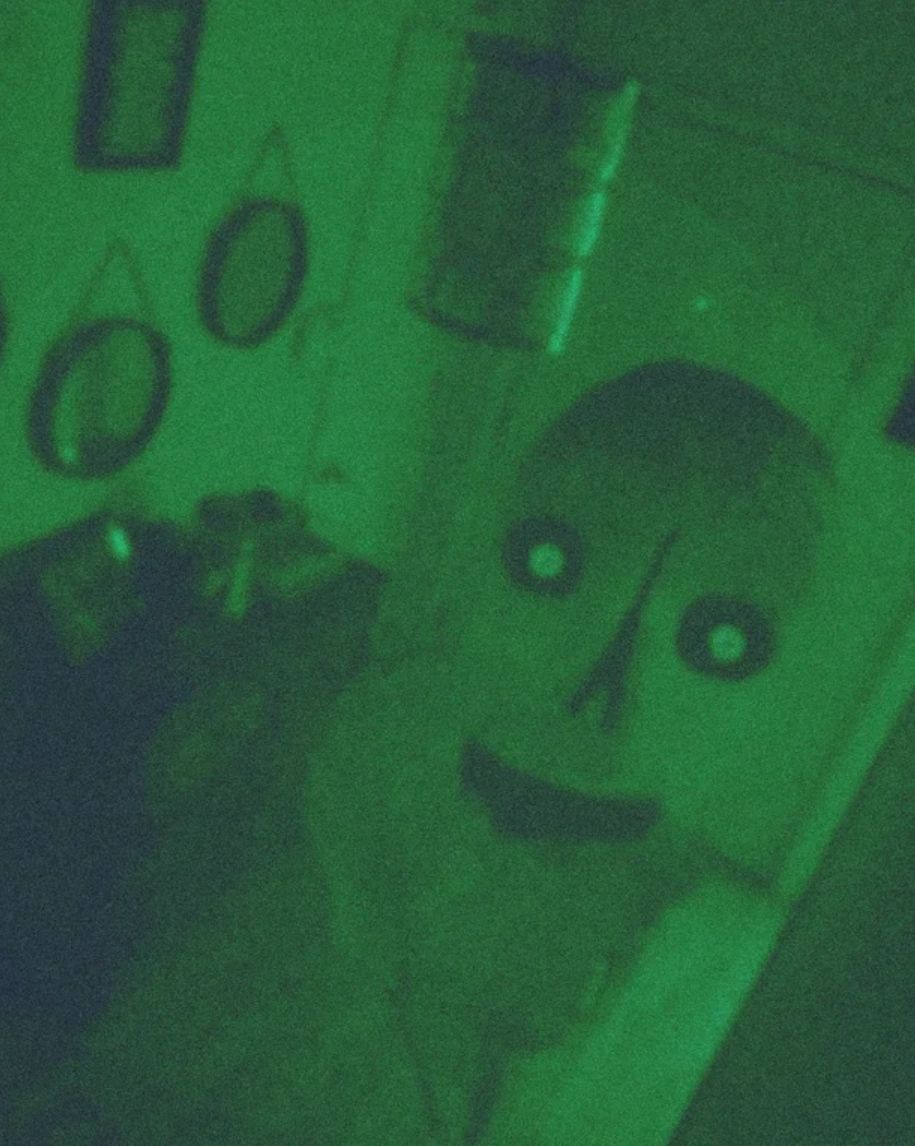 However, not only do I not know what it's supposed to be but I'm not sure it would matter if someone put this next to me before I woke up.

14. I'm sorry to reveal an unpleasant truth but every piece we can see in this window is a fly. 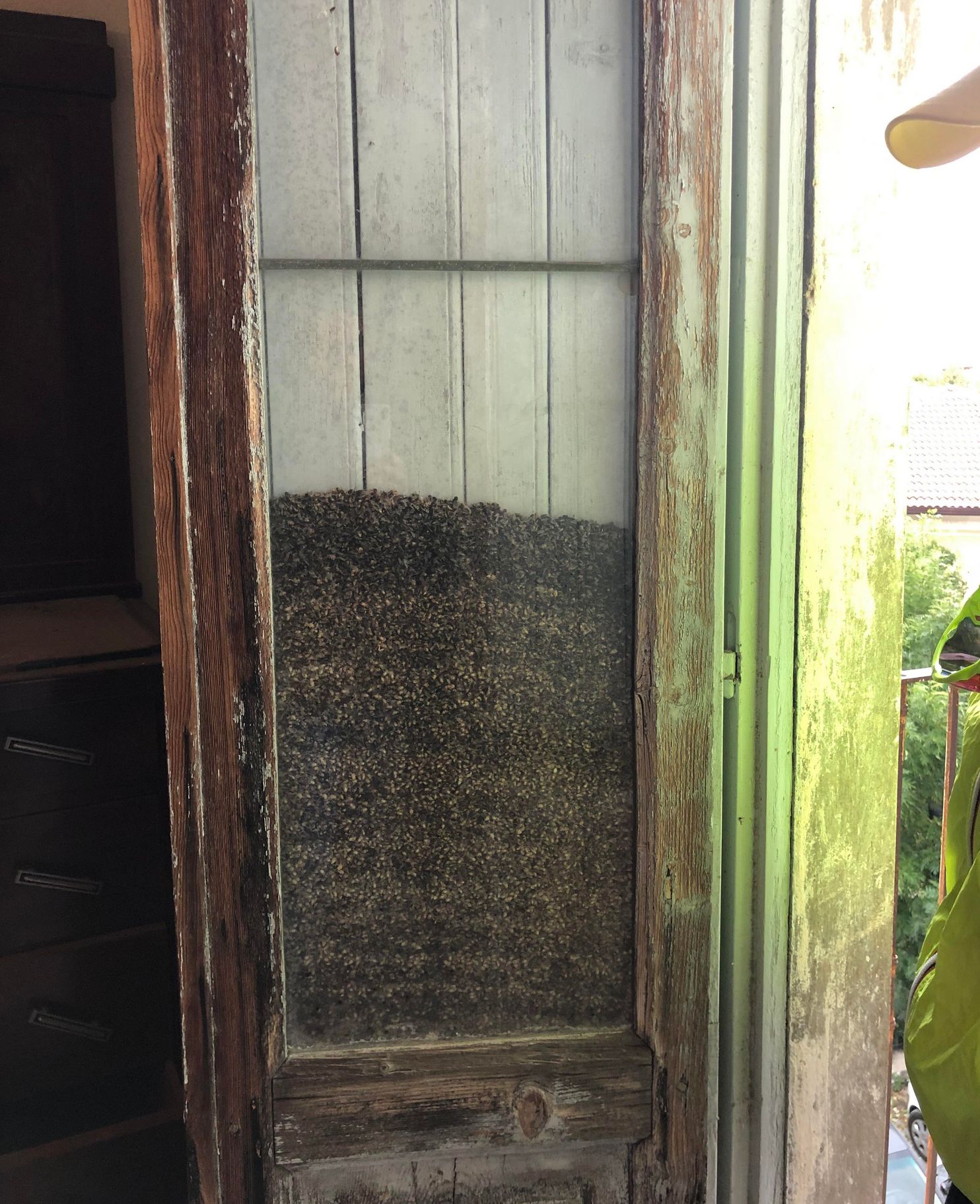 It's possible that something got in there and died, which attracted flies. Once those flies laid eggs on it, those eggs hatched into larvae that couldn't escape once they became flies themselves.

That said, it's not like flies are known to be smart enough to avoid something that obviously caused the doom of so many of their friends. Otherwise, they'd stop bothering us and keep to themselves like spiders do.

15. As if their apartment burning down for mysterious reasons wasn't enough to deal with, the uploader saw something strange in what remained of it. 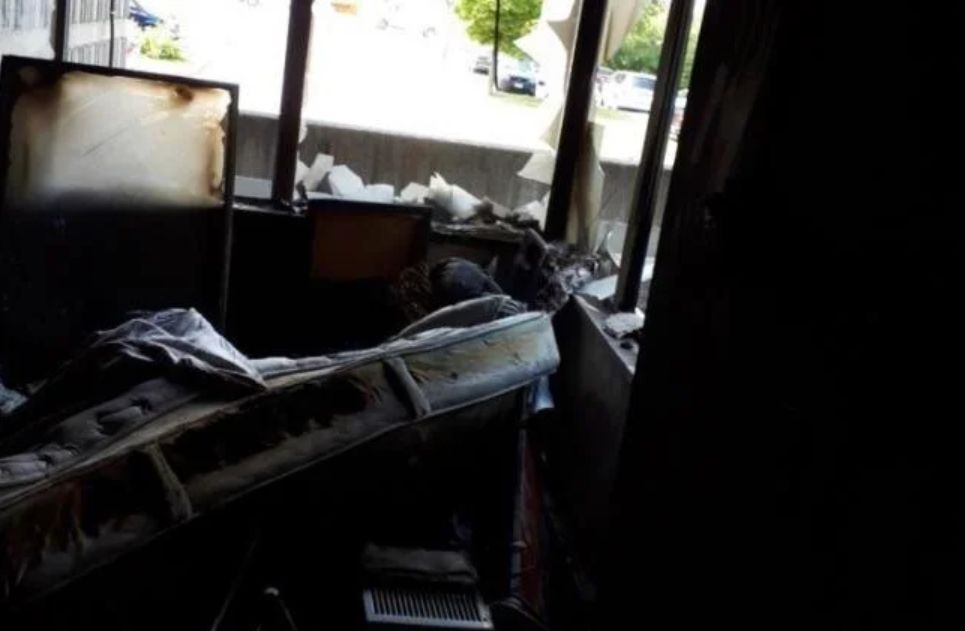 If you look above the mattress, you can see what they thought looked like the top of someone or something's head. They also said it didn't match anything they had left there.

Granted, fires can warp our things until they're completely unrecognizable but I don't blame them for being creeped out by that sight when they're already in a stressful situation.

16. As beautiful as owls are, it's hard not to feel a little weird when one of them won't stop staring at you. 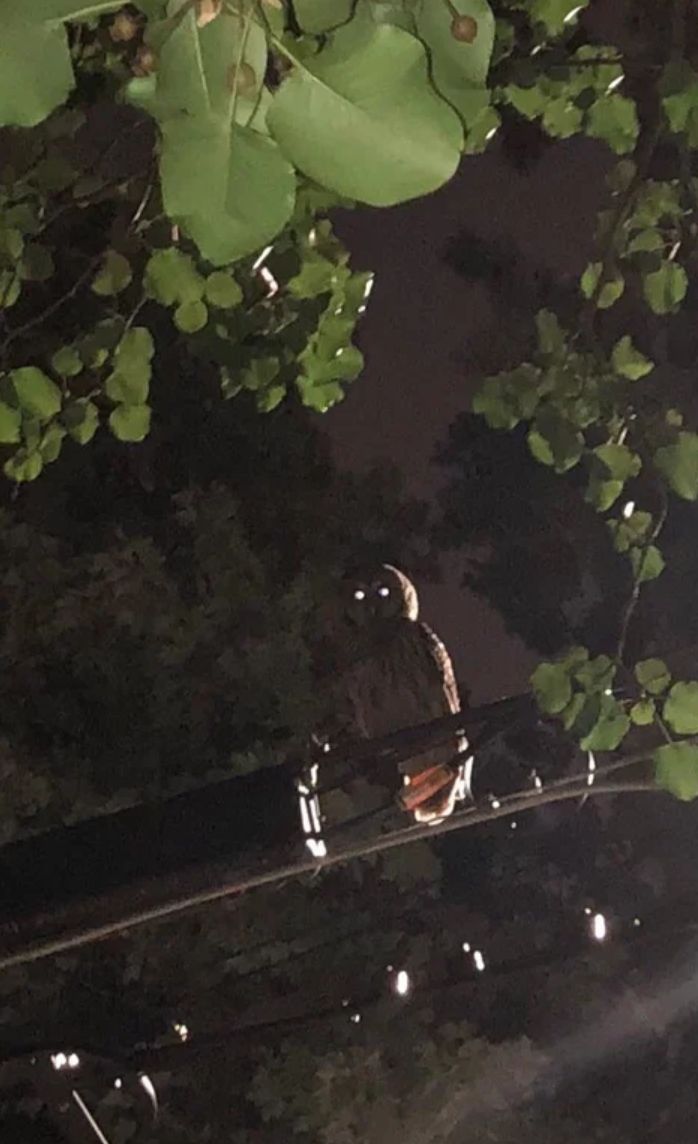 After all, they may be aesthetically pleasing birds of prey but that doesn't make them any less efficient hunters or their talons any less sharp.

17. Even when there's nobody around, there are places that just don't feel safe to us and this looks like one of them.

It's worse to be in the park after dark but there are still large enough shadows between those street lights for something unpleasant to hide in.

18. Apparently, this statue was found inside of an abandoned house in Italy. 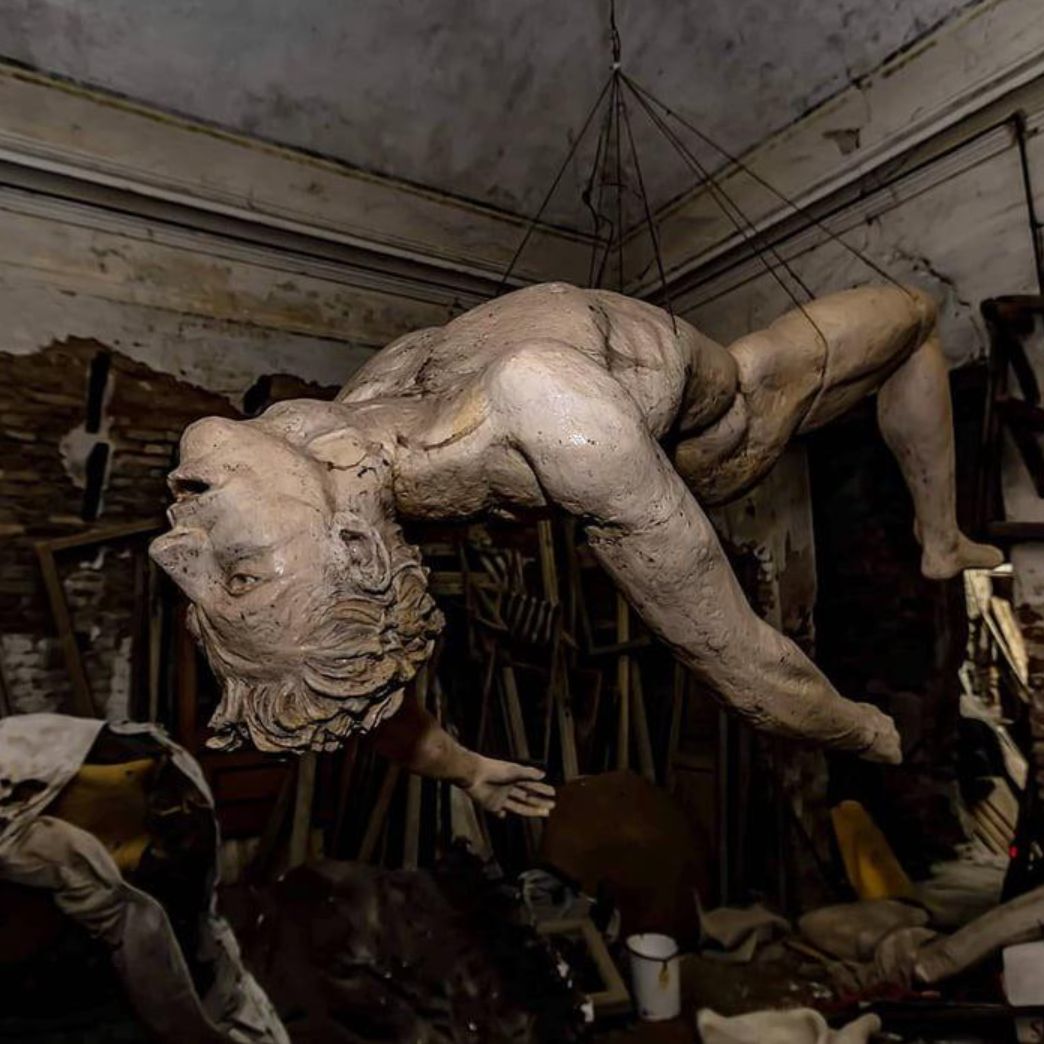 By the way, one of the ways to say "get out" in Italian is "vattene."

I say that because it's good to know what a demonic house is about to scream at you when you see something like this in it.

19. Although this looks like some kind of horrific roadside monster, we're really just looking at a particularly diseased tree. 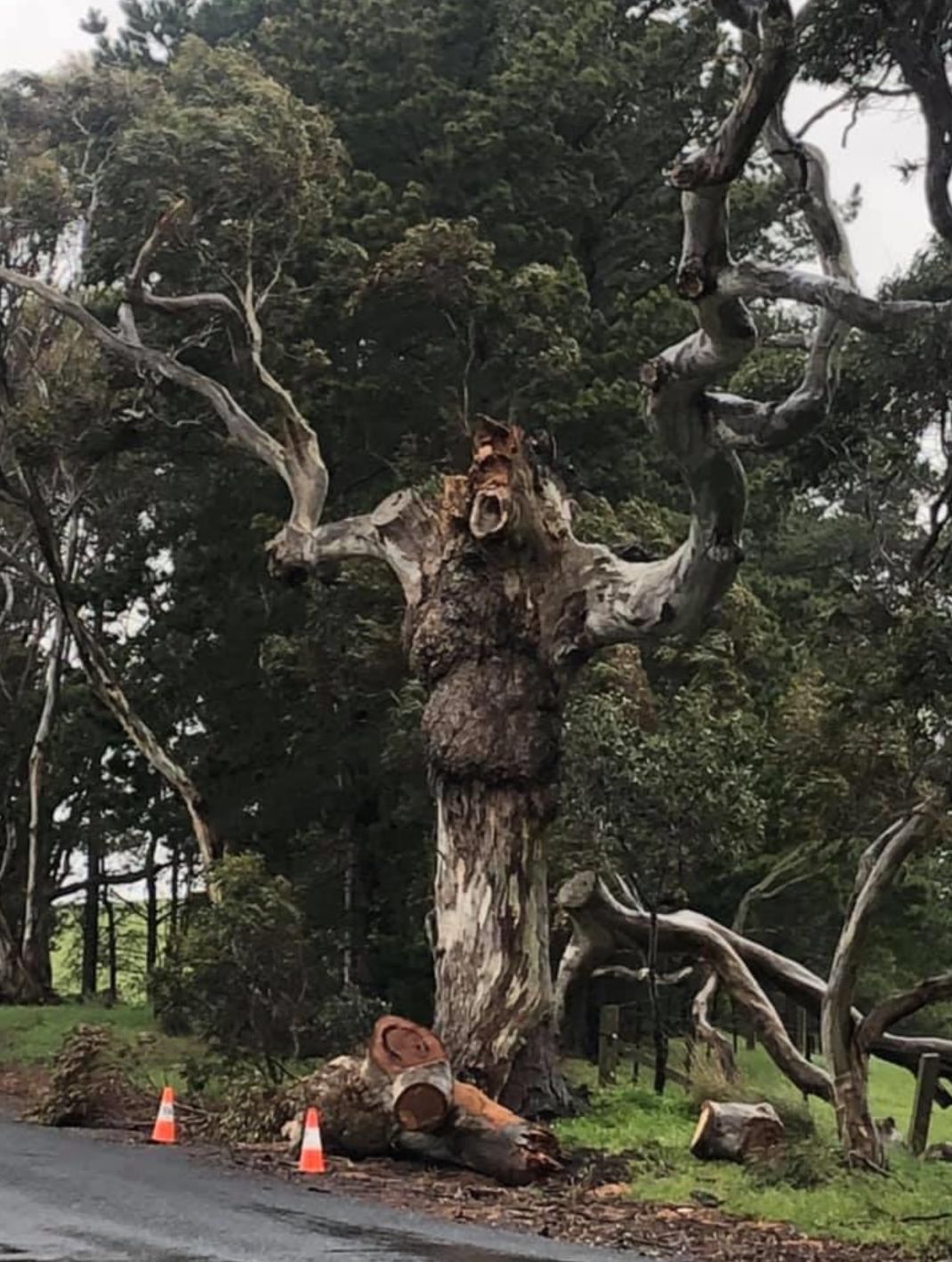 With that in mind, it's not so surprising that a crew seems to be in the middle of taking it down.

I know that any woodworkers reading this are super interested in getting their hands on those massive burls, though.

20. Although the point of taxidermy is to preserve animals after they're gone, that doesn't mean that's how things are guaranteed to go. 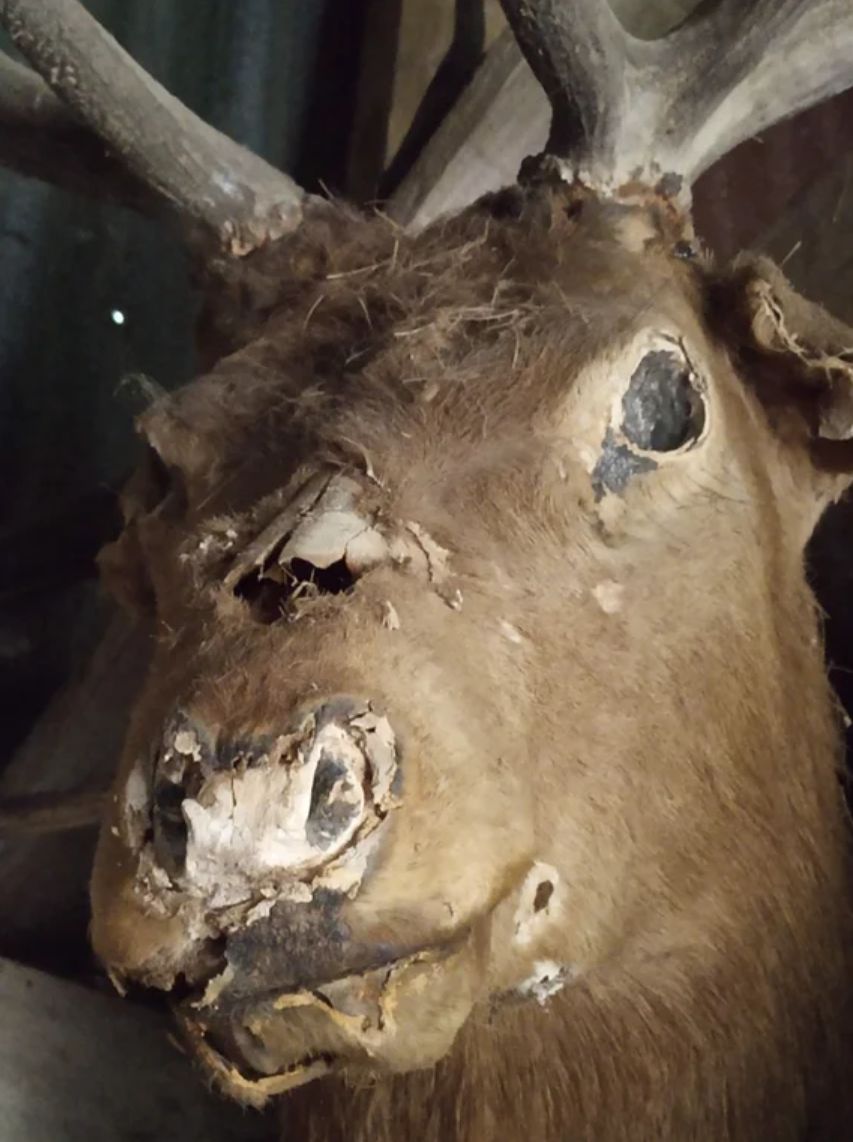 As we can see here, leaving a taxidermy deer head in an abandoned, decrepit house is a great way to wreck all the work someone did on it.

Oh, and to terrify everyone, of course.