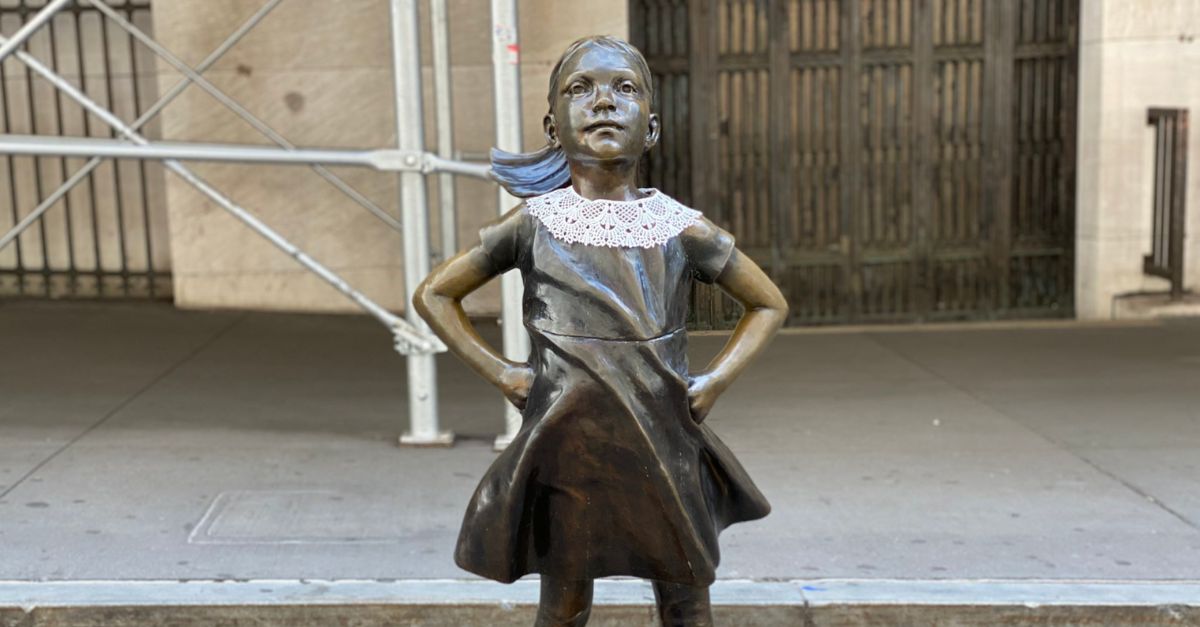 As you've undoubtedly heard by now, Supreme Court Justice Ruth Bader Ginsburg passed away at age 87 on September 18 due to complications from metastatic pancreatic cancer.

With her death, not only has the United States lost a pioneering jurist with a distinguished career behind her, but the world has also lost a strong feminist icon who was widely nicknamed "The Notorious RBG."

Although the fallout from her passing seems like it will have serious implications for the already tense powder keg that is American politics, it is also a heartbreaking loss to many who looked up to her as a hero.

And it seems that one New York agency has found an appropriate way to pay its respects.

Even if you've never been to New York City, there's a good chance you've seen the "Fearless Girl" statue that stands there. 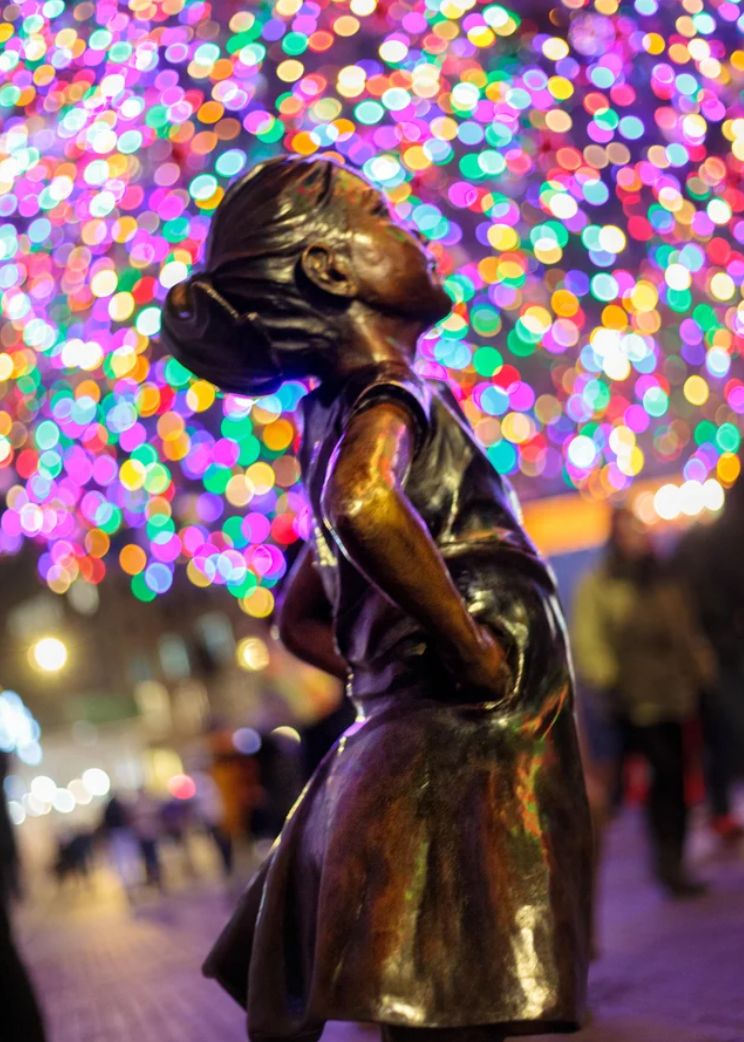 As The Guardian reported, this statue was installed in 2017 as a symbol of female empowerment from the way she stands up to the charging bull that had already stood in the city's financial district.

Although the statue's purpose remains the same, it has since been moved to the front of the New York Stock Exchange.

But if you were to visit the statue now, you would see the girl depicted wearing a lace collar around her neck. 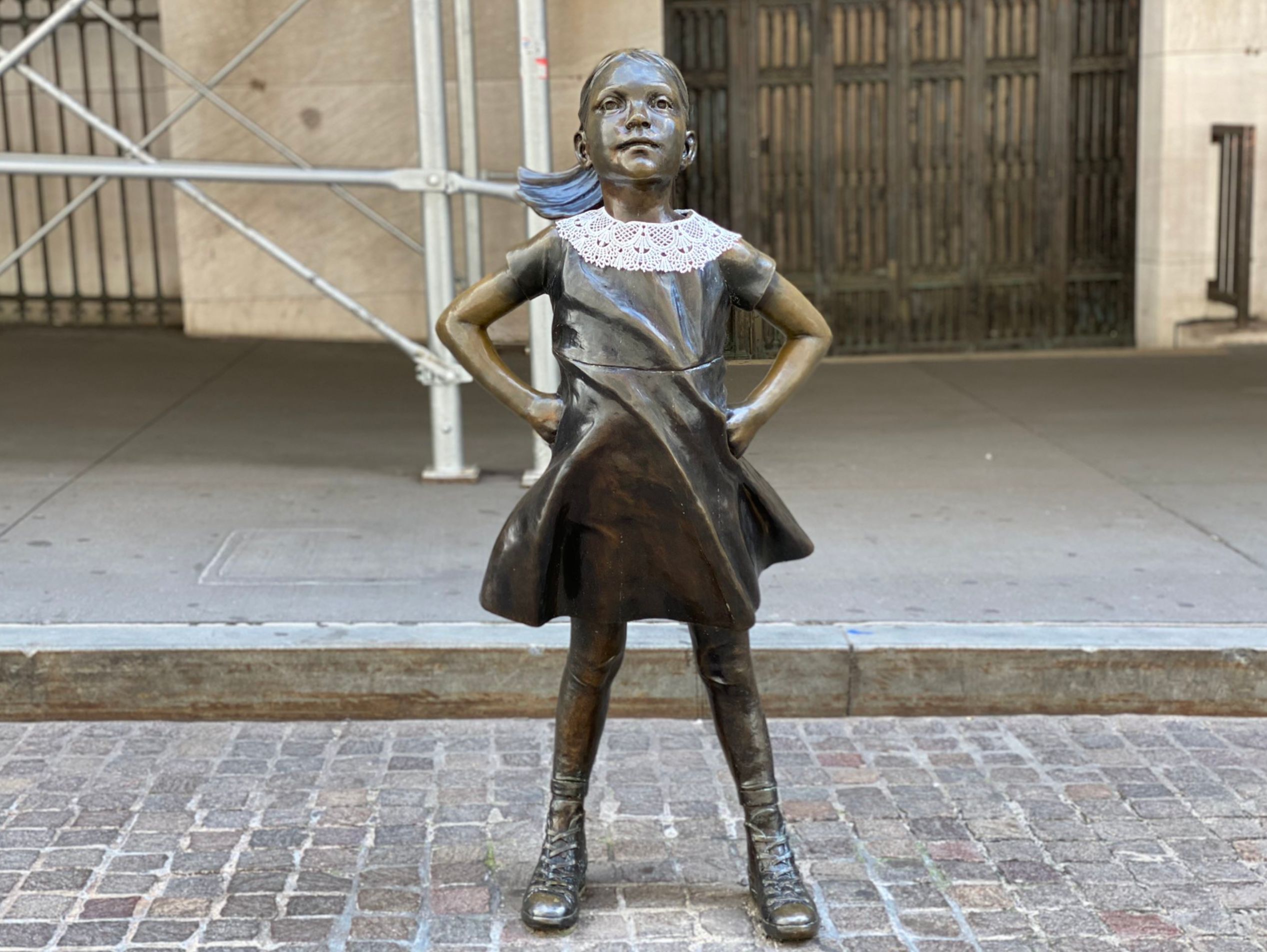 This is a reference to similar collars that Ginsburg made a signature feature of her judicial attire. Ad Age reported that the image of the collared statue appeared in a full-page New York Times ad on Sunday, along with the caption, "Here's to the original."

Much like the statue itself, the ad came as a collaboration between the investment firm State Street Global Advisors and the McCann advertising network. 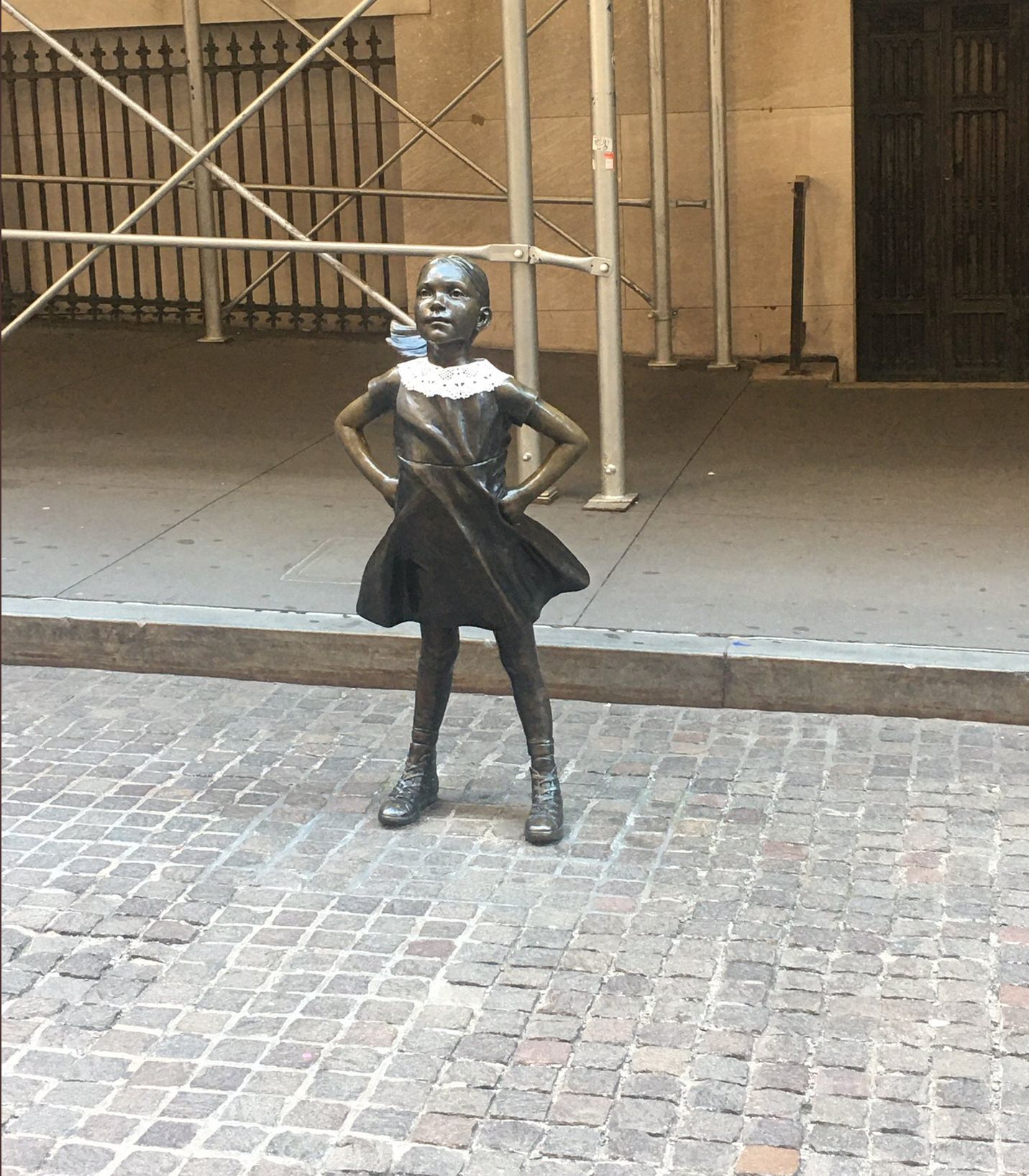 As The Atlantic reported, the statue was part of a promotion by the investment managers that encouraged more companies to have women in leadership positions.

According to Ad Age, McCann was originally going to put a face mask on the "Fearless Girl" to encourage the public to wear them but this idea was abandoned after news of Ginsburg's death spread.

Instead, McCann planned the tribute we see here and the associated ad was approved only eight hours after the idea was formed.

For Ginsburg, the collar wasn't just a means for her to stand out, but to introduce feminine elements to judicial robes that were traditionally designed for men. 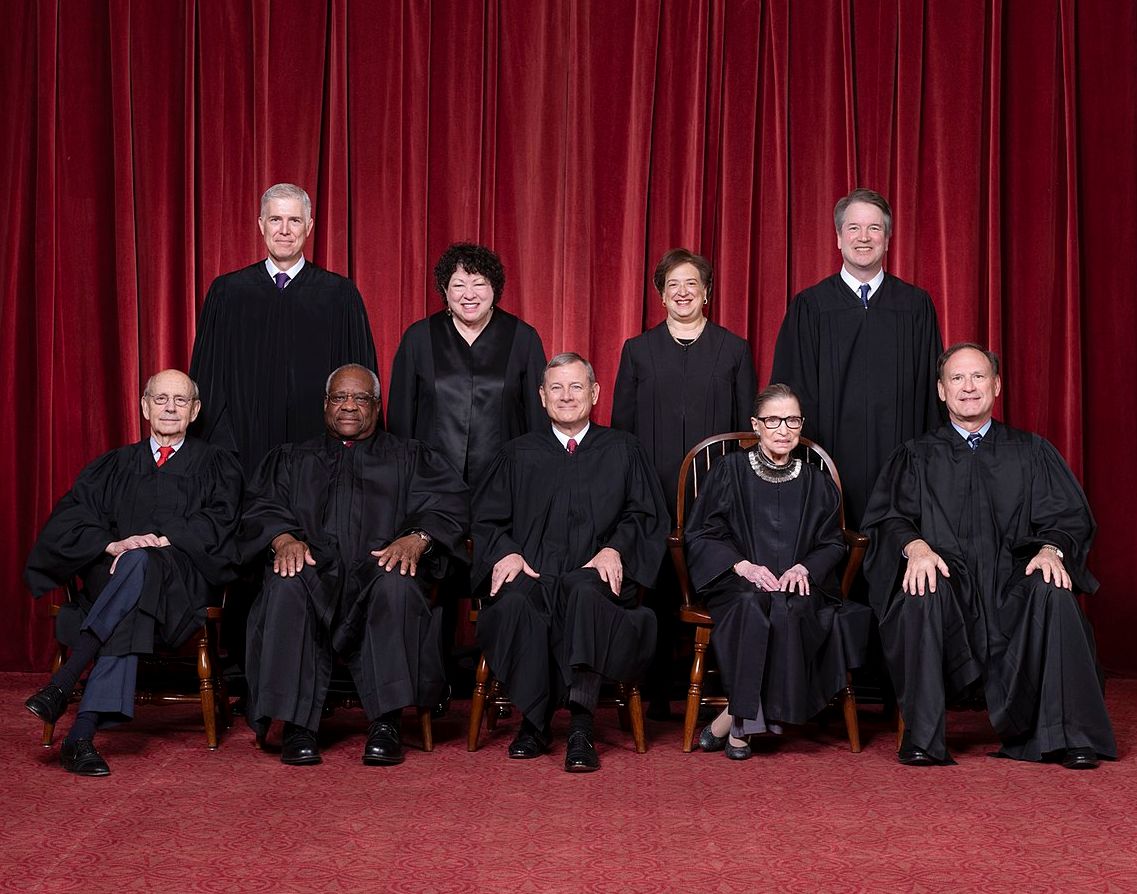 The New York Times reported, that Ginsburg and fellow Supreme Court Justice Sandra Day O’Connor (not pictured) were standing against the common perception during the early '90s that women entering the workforce had to adopt the trappings of masculinity to be taken seriously.

Since lace was considered a "girlie" material, it seemed an appropriate choice in the fight against this attitude.

Although she wore many different collars for various reasons, two styles of them were tied to her judicial opinions. 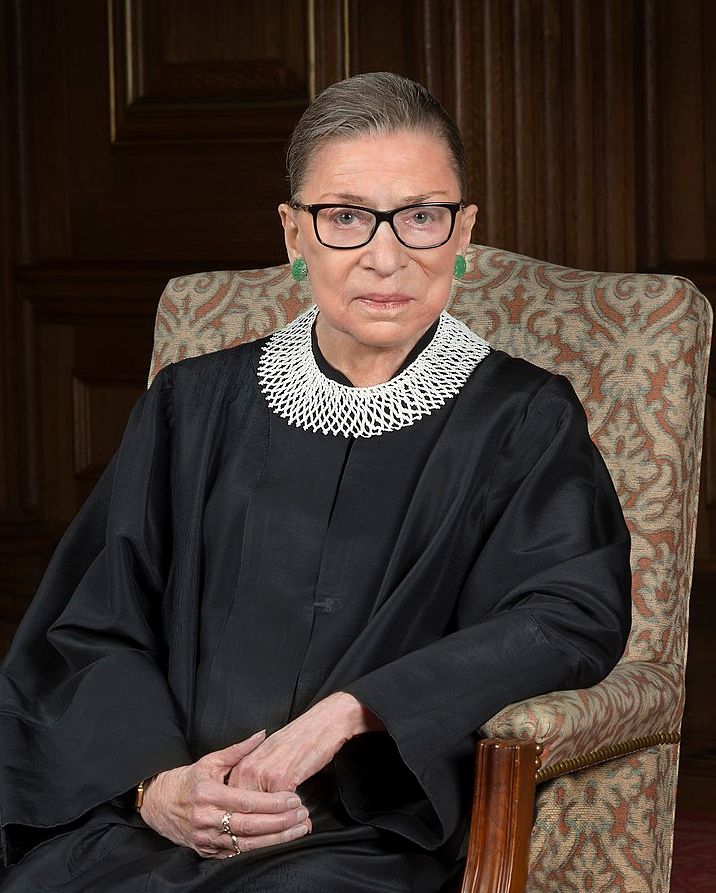 The one we see here was reserved for occasions when her stance was part of the court's majority judgment.

When Ginsburg dissented with her colleagues, she instead wore a more spiky collar like the one we see in the group photo above.

And while the latter became a popular design for jewelry and temporary tattoos in the wake of the election, the former apparently seemed more appropriate for the tribute to her.