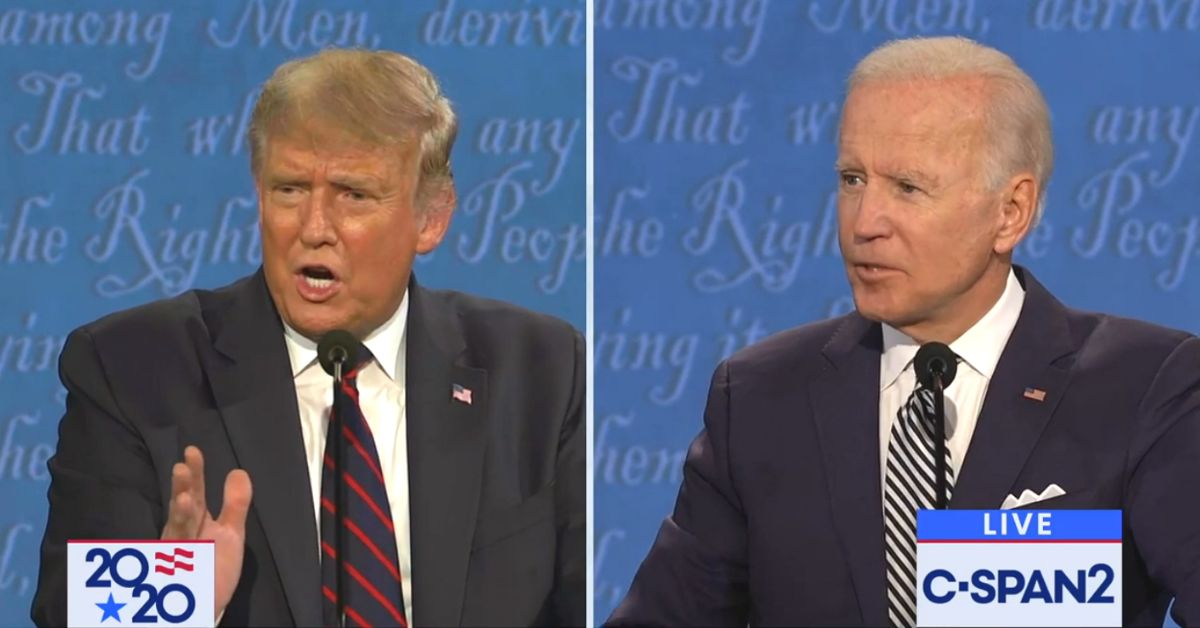 Instead Of Denouncing White Supremacists In Debate, Trump Told Them To 'Stand By'

The first presidential debate between President Trump and Joe Biden is in the books but by all accounts, it won't go down in history as a high point in American political discourse, as many exchanges descended into cacophony and chaos.

Indeed, as CBS News reported, moderator Chris Wallace chastised the president multiple times for failing to abide by the rules of the debate that he had agreed to after interrupting and talking over Biden on several occasions.

Such a tumultuous performance overshadowed many moments during the debate but the president's answer to a question regarding condemning white supremacists stood out.

During a discussion on "race and violence in cities," Wallace provided the president an opportunity to specifically denounce white supremacists, and President Trump faltered.

Although the president told Wallace he was "willing to do that," he didn't actually do it, instead pivoting to suggest that violence in American cities has a different source, saying "almost everything I see is from the left wing, not from the right wing. … I want to see peace."

When pressed by Wallace to specifically address the Proud Boys, President Trump told them to "stand back and stand by," not stand down.

Trump's campaign team countered assertions that he did not and has not disavowed white supremacists.

During an appearance on Fox News, Trump campaign communications director Tim Murtagh claimed that the president has "repeatedly, over the course of years now, denounced white supremacists and has been consistent in doing that."

"The media keeps asking him to denounce white supremacy, and he keeps doing it," Murtagh continued. "At a certain point, they are going to have to take yes for an answer."

However, many commentators were quick to point to Trump's failure to condemn white supremacists following the 2017 "Unite the Right" rally in Charlottesville.

One counter-protester was killed at the rally, after which the president infamously remarked that there were "very fine people on both sides" in Charlottseville that day.

Trump has also referred to Black Lives Matter, the organization established in response to several killings of Black people at the hands of police, as a "symbol of hate."

In fact, the Proud Boys appeared to take the president's reply as an endorsement.

On messaging apps Parler and Telegram, the Proud Boys celebrated the president's words and quickly worked up a logo, apparently adopting "Stand Back, Stand By" as a new slogan.

For many, Trump's comments were the most important moment in the debate.

Former Health and Homeland Security official Miles Taylor, a Trump appointee, called President Trump's failure to condemn white supremacists "disqualifying from the presidency" in an appearance on CNN, according to Politico.

"I helped run the department responsible for thwarting terrorist threats to Americans," he said. "I'm sad to say a U.S. President is winking and nodding at violent groups that threaten American lives and our way of life."