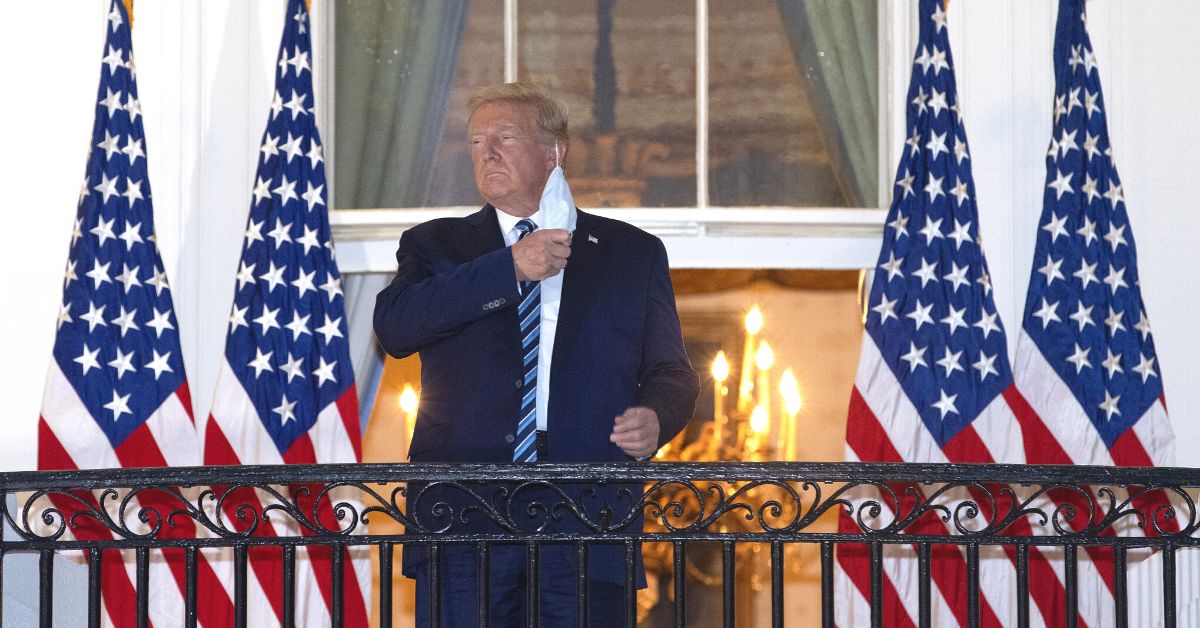 After a whirlwind weekend in which the president's doctors and staff members repeatedly provided conflicting information about his health condition to the press during his stay at Walter Reed National Military Center for treatment of COVID-19, President Trump staged a return to the White House Monday night.

Standing on the Truman Balcony, a still-infectious, disease-shedding Trump appeared before cameras and took off his face mask, sparking a fresh controversy.

The White House has already become a hot spot for COVID-19 infections.

And so, seeing the president maskless, wandering around the White House in front of aides, even re-doing his entrance for the benefit of a camera crew, had doctors alarmed.

The White House has stated that it will manage risks for those who need to be in contact with the president.

"Physical access to the President will be significantly limited and appropriate PPE will be worn when near him," White House spokesman Judd Deere told The Washington Post.

"President Trump will continue to receive around-the-clock medical care and monitoring from his Physician and a team of dedicated physicians and nurses in the White House Medical Unit who function out of a state-of-the-art clinic, which includes many of the things a person would see in an urgent care clinic and much more, to ensure the Commander-in-Chief makes a full recovery and can continue to discharge his duties."

But Trump's balcony appearance called into question his readiness to return to work.

Before his discharge from Walter Reed, the president's physician, Sean Conley, issued assurances that Trump qualified to go back to the White House.

"Over the past 24 hours, the president's condition has continued to improve," Conley told reporters, according to NPR. "He's met or exceeded all standard hospital discharge criteria. Although he may not be entirely out of the woods yet, the team and I agree that all our evaluations, and most importantly, his clinical status, support the president's safe return home, where he will be surrounded by world-class medical care, 24/7."

And yet Trump, who had to be provided supplemental oxygen at least twice, appeared to be struggling to breathe deeply during his balcony appearance.

Nevertheless, Trump has continued to downplay the seriousness of his disease and asserted that he feels "great."

As AP News reported, that statement was met with derision from families and friends of the 210,000+ people who have died of the disease so far. As many noted, the president received world-class care and the "best medical equipment" and "best medicines" included experimental treatments that aren't available to the general public.

Trump's opponent in the election, former VP Joe Biden, said during a town hall that he hoped the president's recovery would be "swift and successful."

"But the nation's Covid crisis is far, far from over," Biden said, according to The Independent. "Since the president was in the hospital, since Friday, more than 100,000 more people have been diagnosed with Covid. Cases and deaths are climbing in many states."