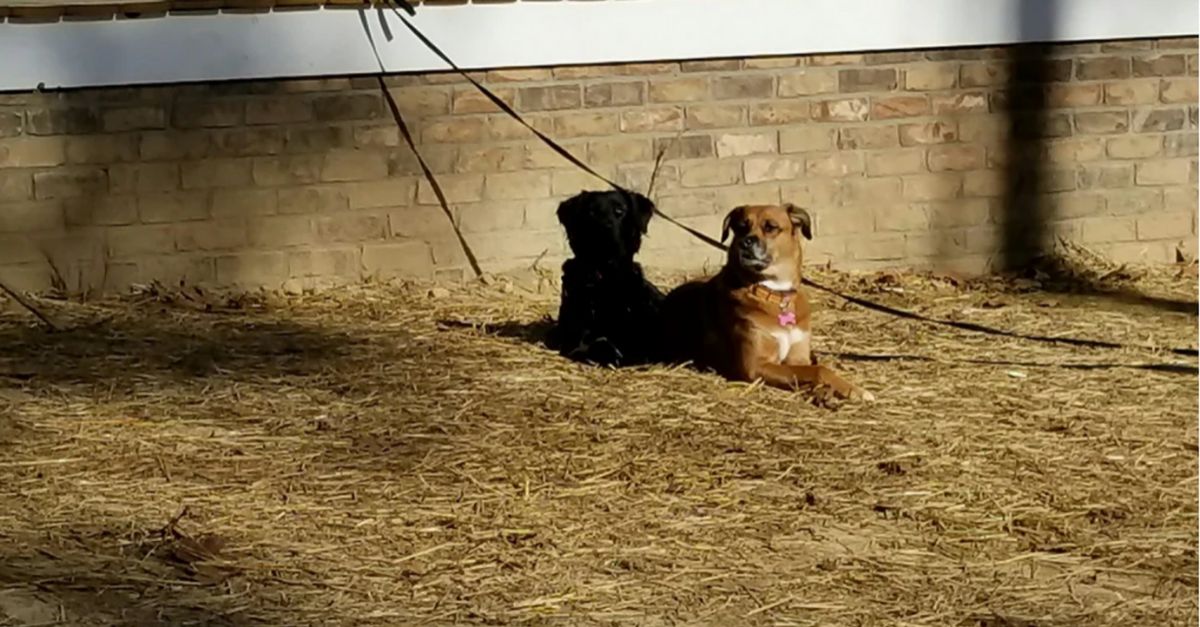 16+ Pics That Aren't Quite As Crazy As They Seem

Although we delight in showing you pictures that we can't figure out either as well as ones that are just as weird in context as they are at first glance, that's not really how most of the images we come across work.

Indeed, when I'm hunting for pictures that belong on lists like those, it's basically a guarantee that I'll come across at least one that seems perfect right up until someone in the comments perfectly explains what's going on. At which point, I usually sigh in disappointment, say "Yeah, that's actually pretty reasonable," and move along.

But really, there's just as much fun to be had in going over those pictures that make more sense than they seem. And I think it helps to have some reassurance that we live in a world that's at least moderately sane sometimes.

1. Believe it or not, this is just one picture showing just one room. 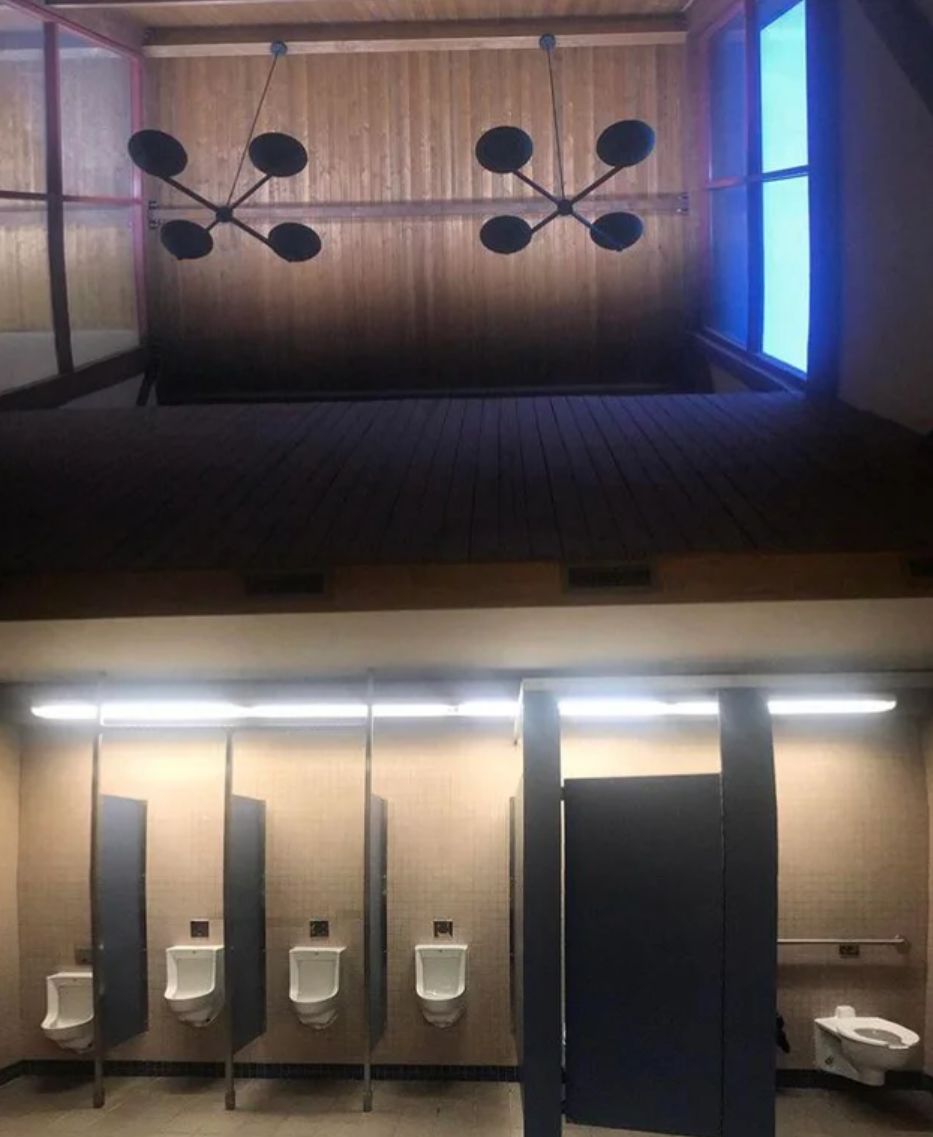 Thinking about it, I'm not sure I've ever used a bathroom that had such high ceilings.

And I really think I'd remember if I visited one that had one section of ceiling over the stalls and a way higher one over the rest of the room.

2. Although this tree is unusual, the two that came together to make it seem fairly common. 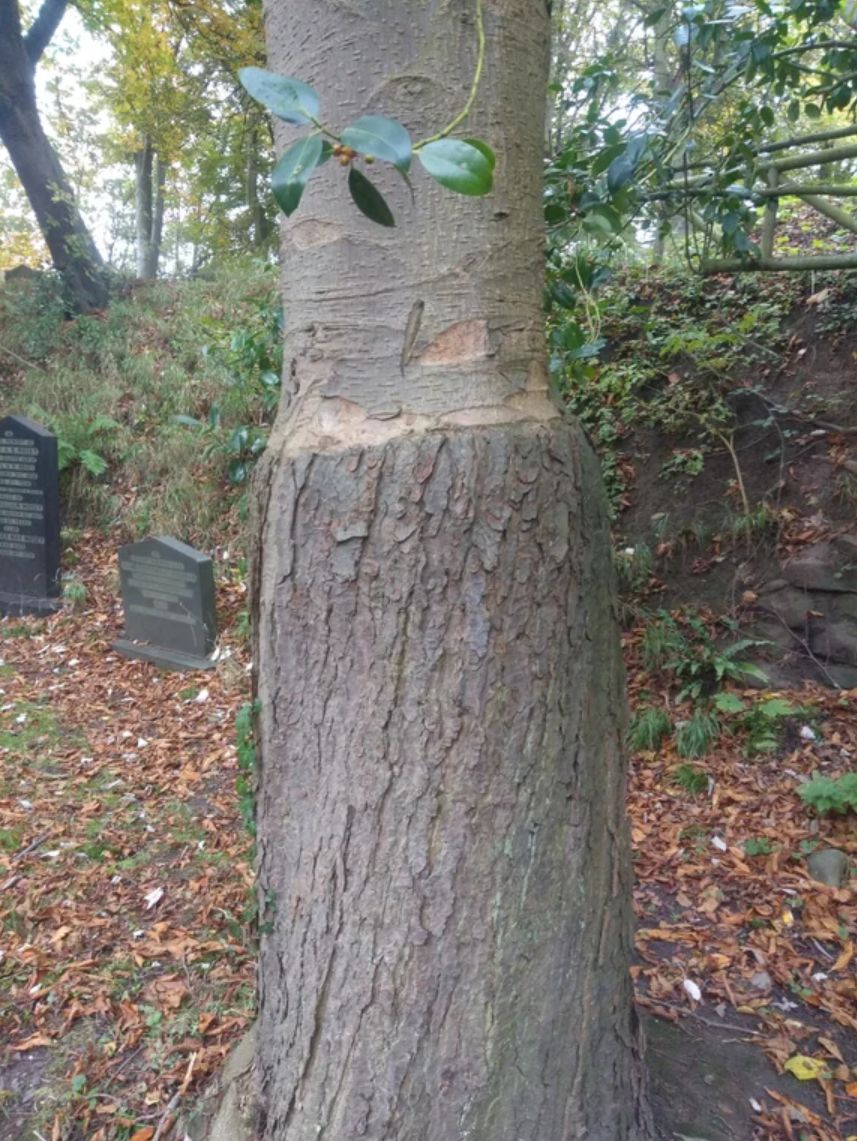 What happened here was that one tree had to be cut down but the groundskeeper of this cemetery was able to grow a completely different one from the stump.

Considering how we normally only see this with much smaller plants, it must have been hard to do.

3. Although this flies in the face of everything we know about them, this is a hamburger. 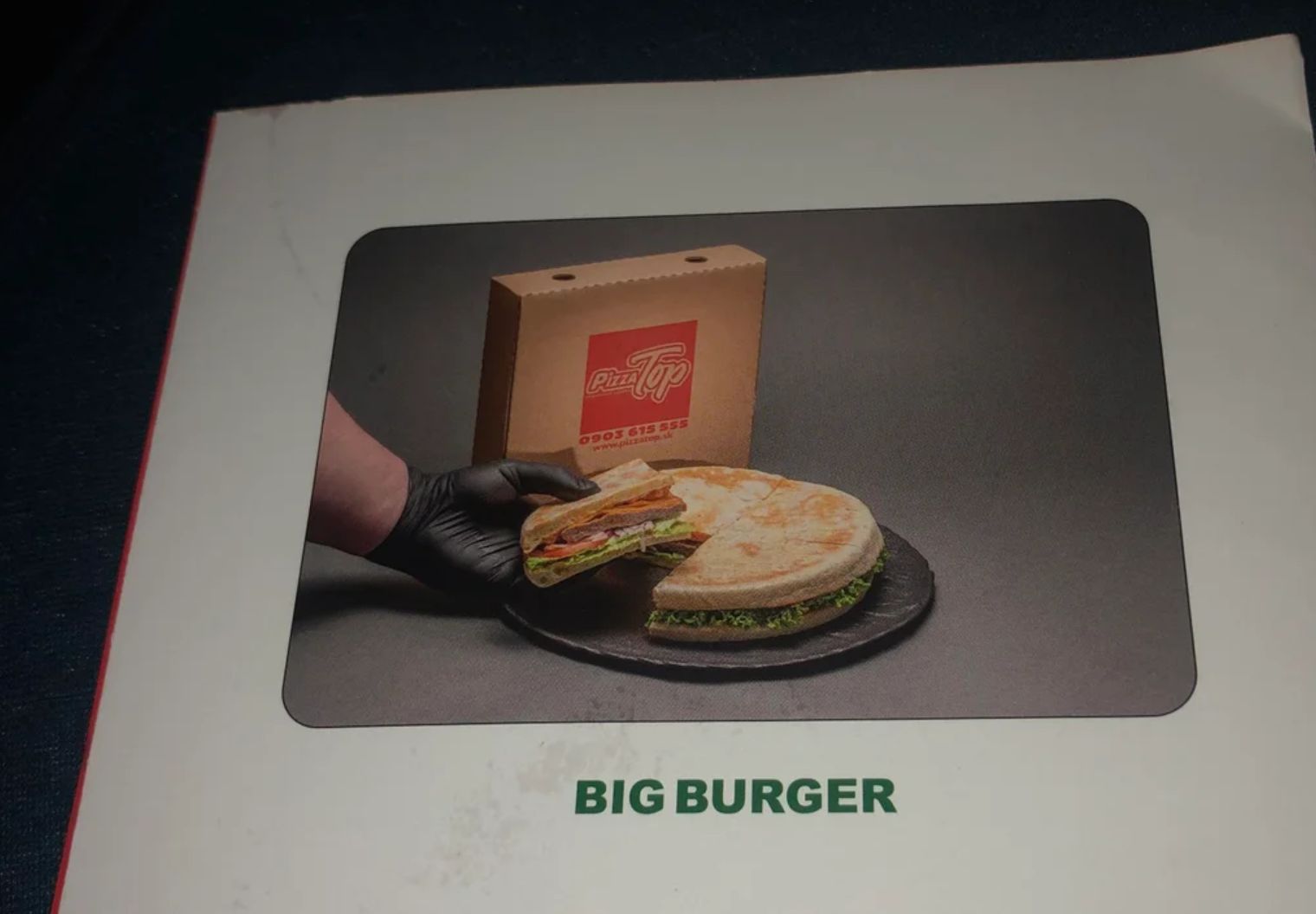 And as strange as it looks, I'm honestly coming around to the idea that it's the best way to have an absolutely massive burger if that's your goal.

After all, every other place that has a similar idea usually just makes the burger way too tall for the human jaw to accommodate.

4. Sadly, we aren't witnessing landmark evidence that elves live among us. 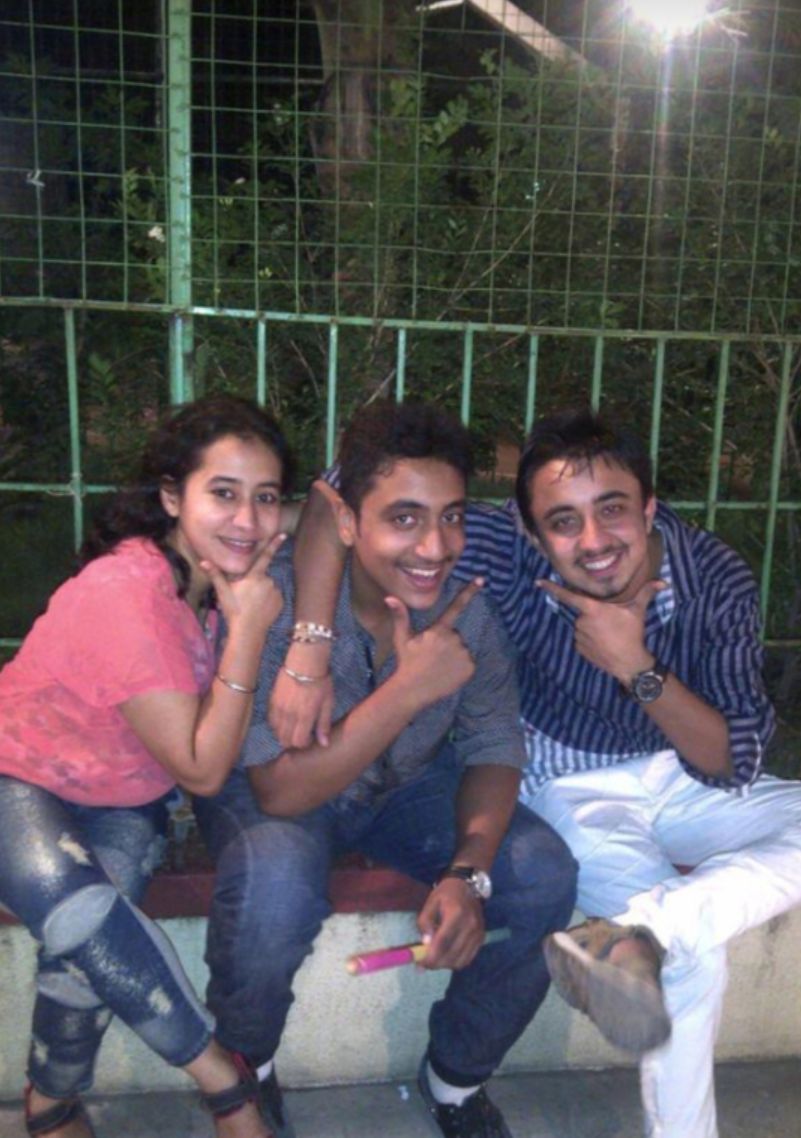 Although it may appear at first glance that he has an ear with an unusually large helix, we're actually just seeing the light hitting the arm of the guy next to him from a weird angle.

5. Not only is this bus not anywhere near as tall as it looks at first but it's technically not a bus at all. 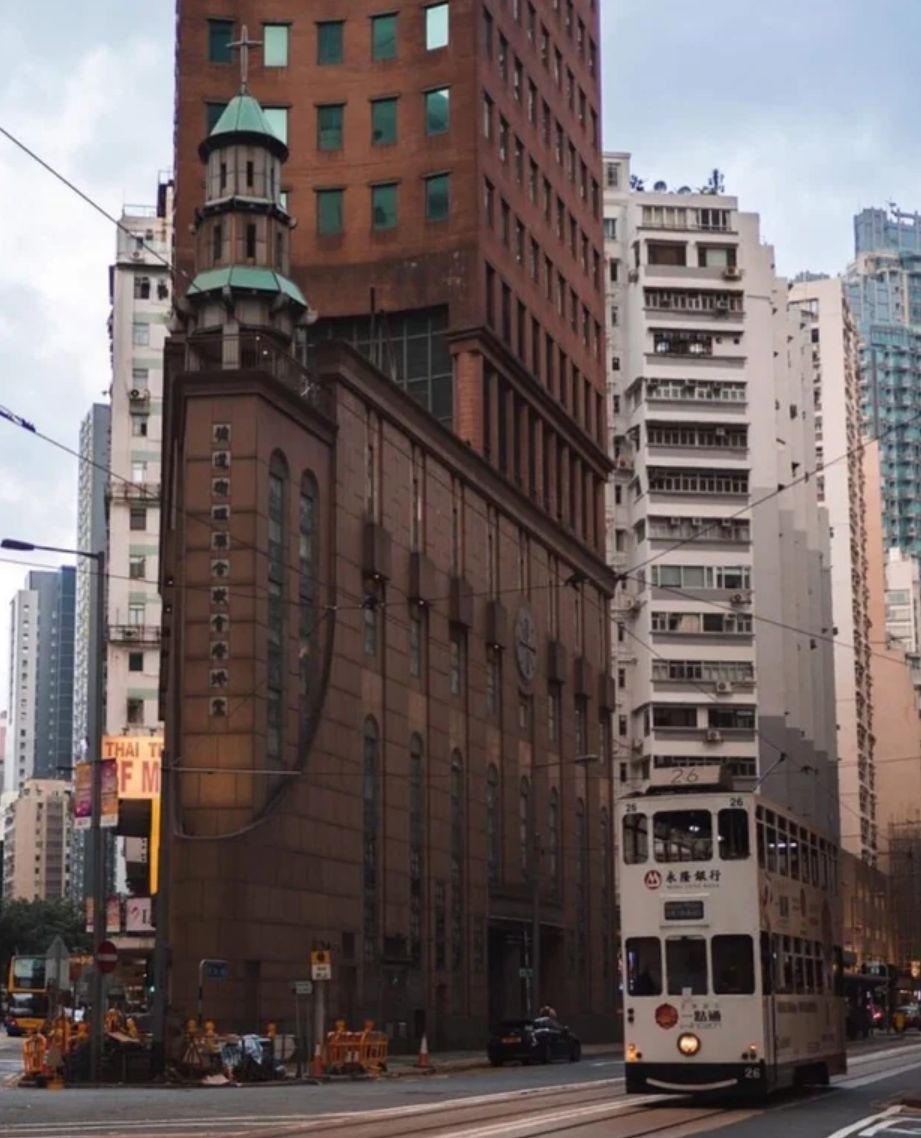 As we can see from the wires it's hitched to and the track it's running on, this is actually more like a trolley.

And noticing those wires helps a lot in differentiating it from the building behind it.

6. That's a pretty tall antenna but this photo makes it seem a lot larger. 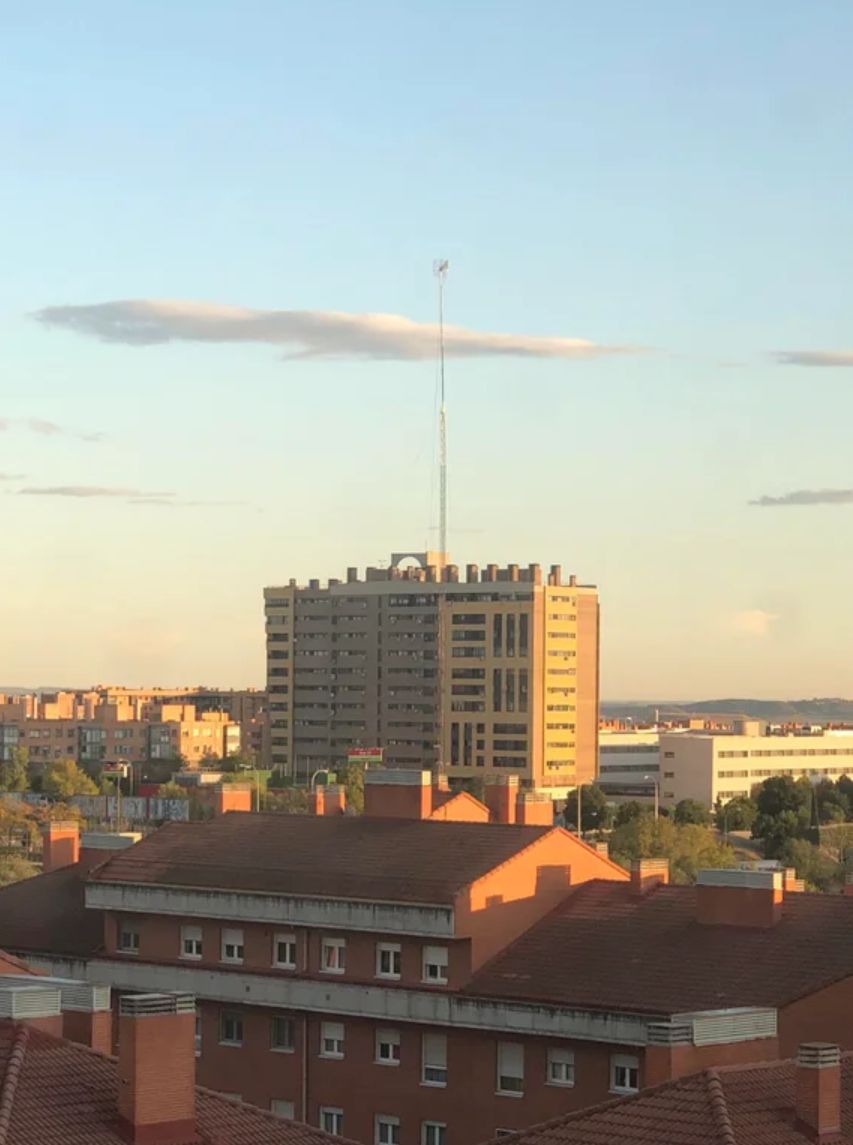 It appears to be poking out of the top of that large apartment building in the background but a closer look actually shows us that it's attached to a residence that's closer to the foreground.

It's all a matter of perspective.

7. Whether you feel relief or disappointment from this fact, this photo only seems like it's capturing a delicate balancing act. 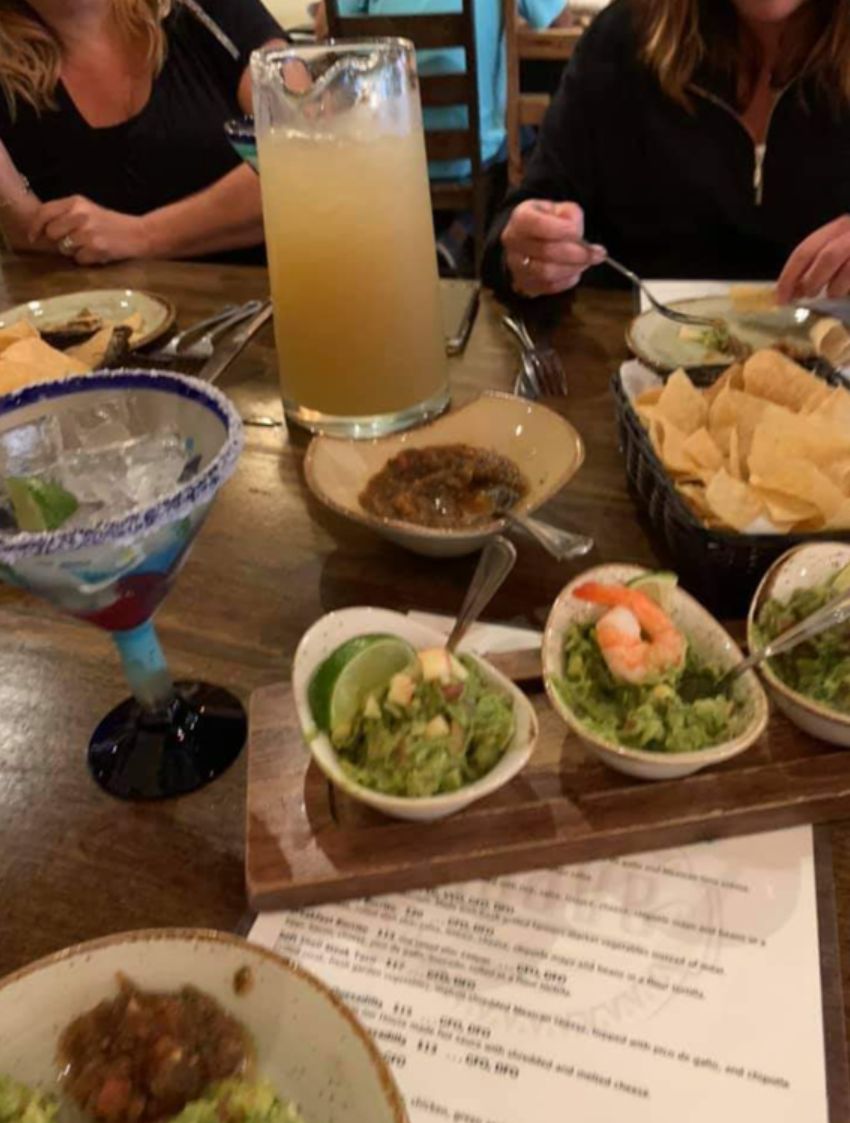 Despite how it looks, that pitcher is actually placed flat on the table. It's just that the bowl next to it has a weird, asymmetrical shape that makes it look like part of it is wedged under the margarita.

8. Not to worry because this picture isn't nearly as death defying as it looks. 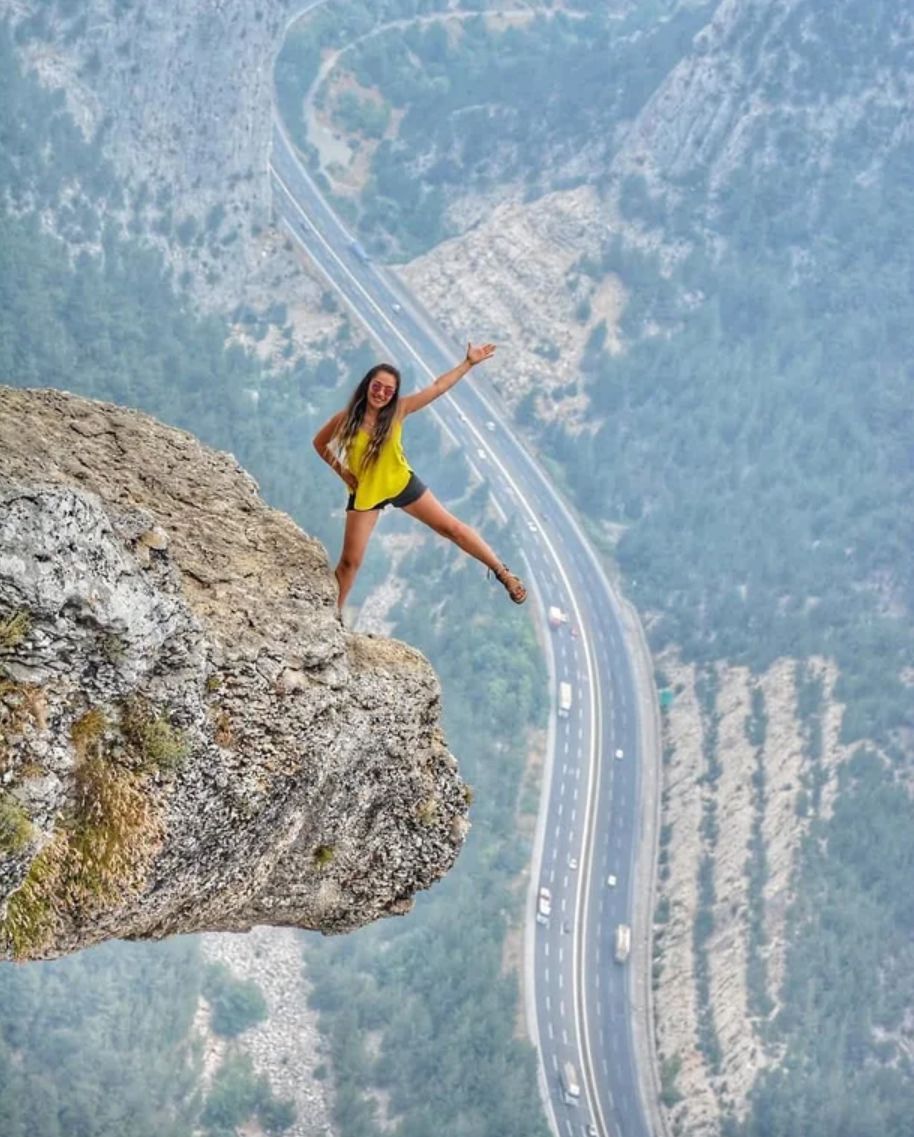 Thanks to the magic of forced perspective, this young woman seems like she's balancing precariously off a cliff.

However, a YouTube video showing this ledge from another angle reveals that it has has a much wider ledge a short distance underneath it. So she might hurt herself if she falls from this one but probably not all that seriously.

9. They seem to be missing from this picture but Senate Candidate Cindy Hyde-Smith of Mississippi does have arms. 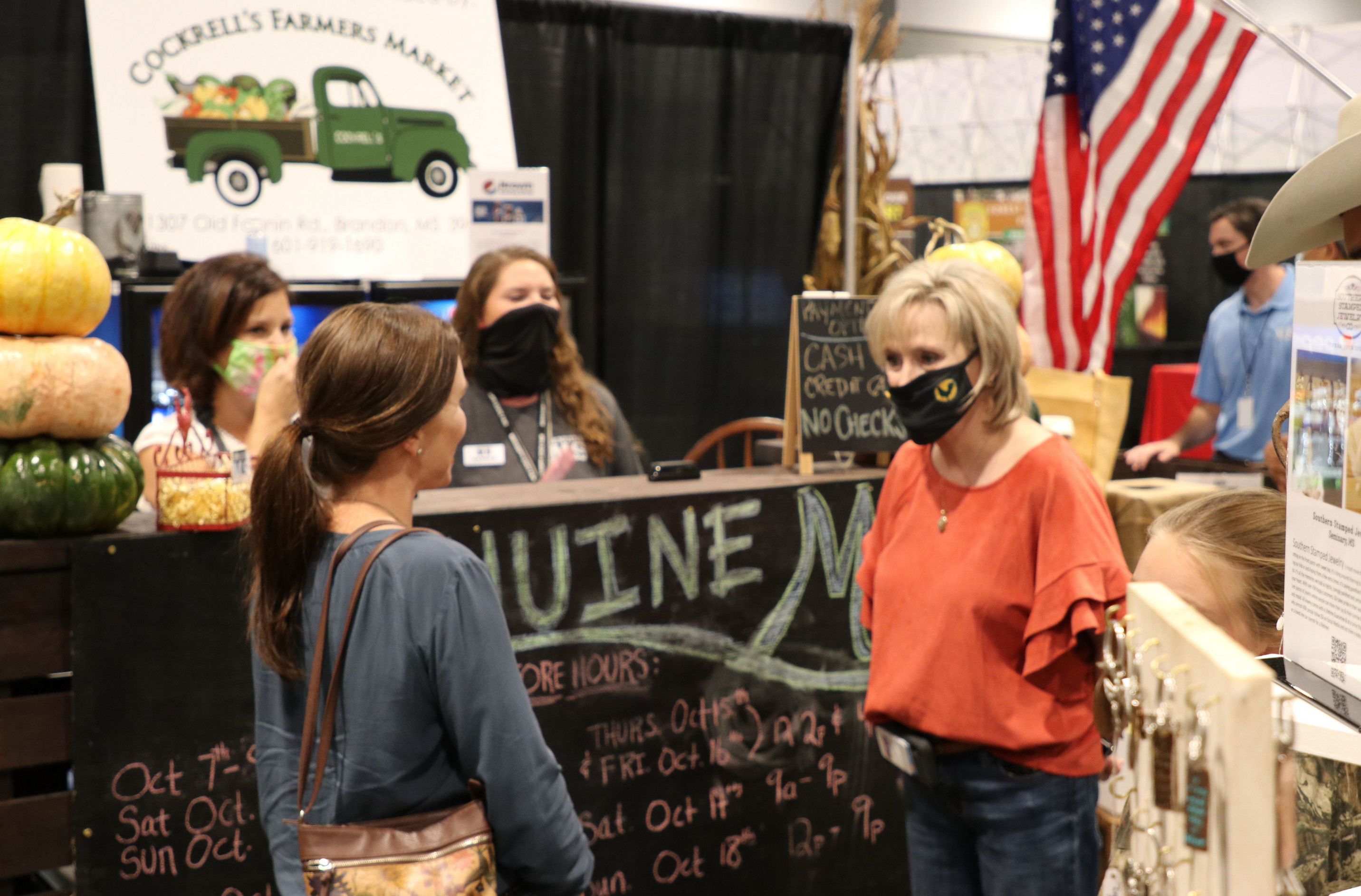 It's just that she's holding them behind her back and the frilly design of her shirt's sleeves is hiding any part of them that would otherwise be visible. 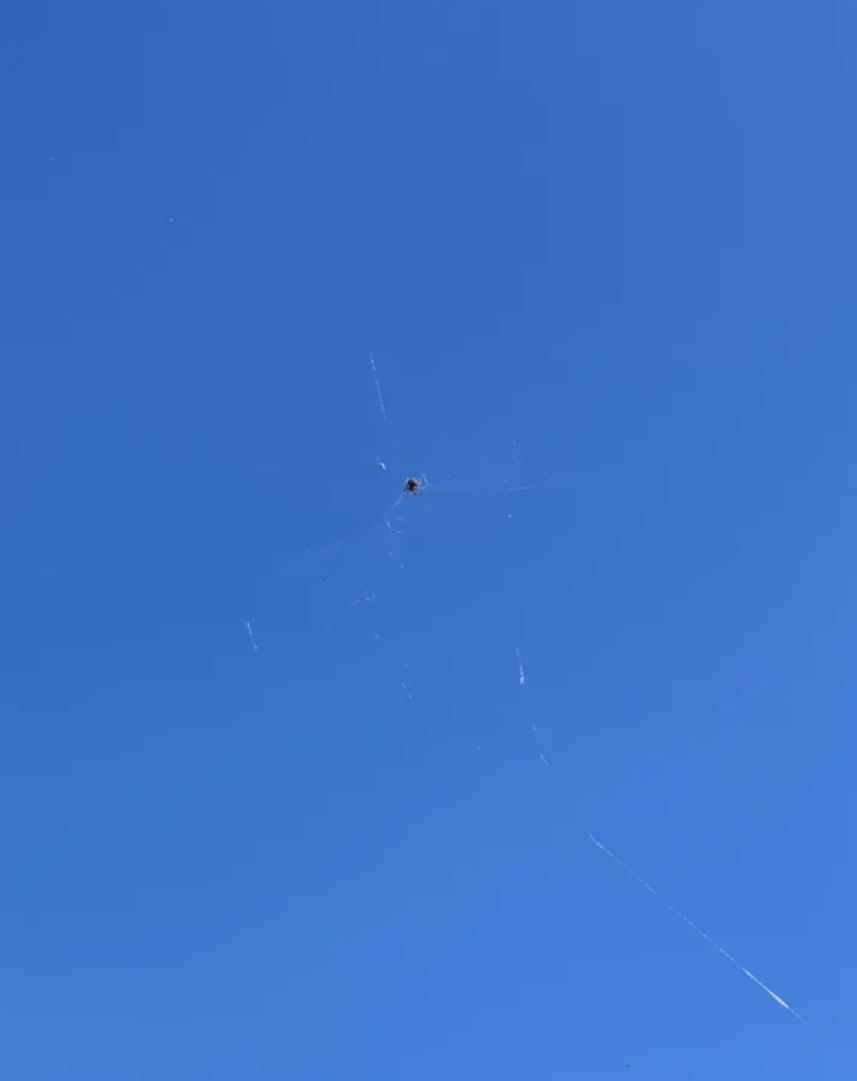 Of course, that spider in the middle of the picture provides a pretty important clue of what we're actually looking at here.

It's just that the posts that it built its web between aren't visible so we can only faintly see the web itself against the blue sky.

11. Although it's fairly easy to explain, there's actually more going on in this photo that it seems. 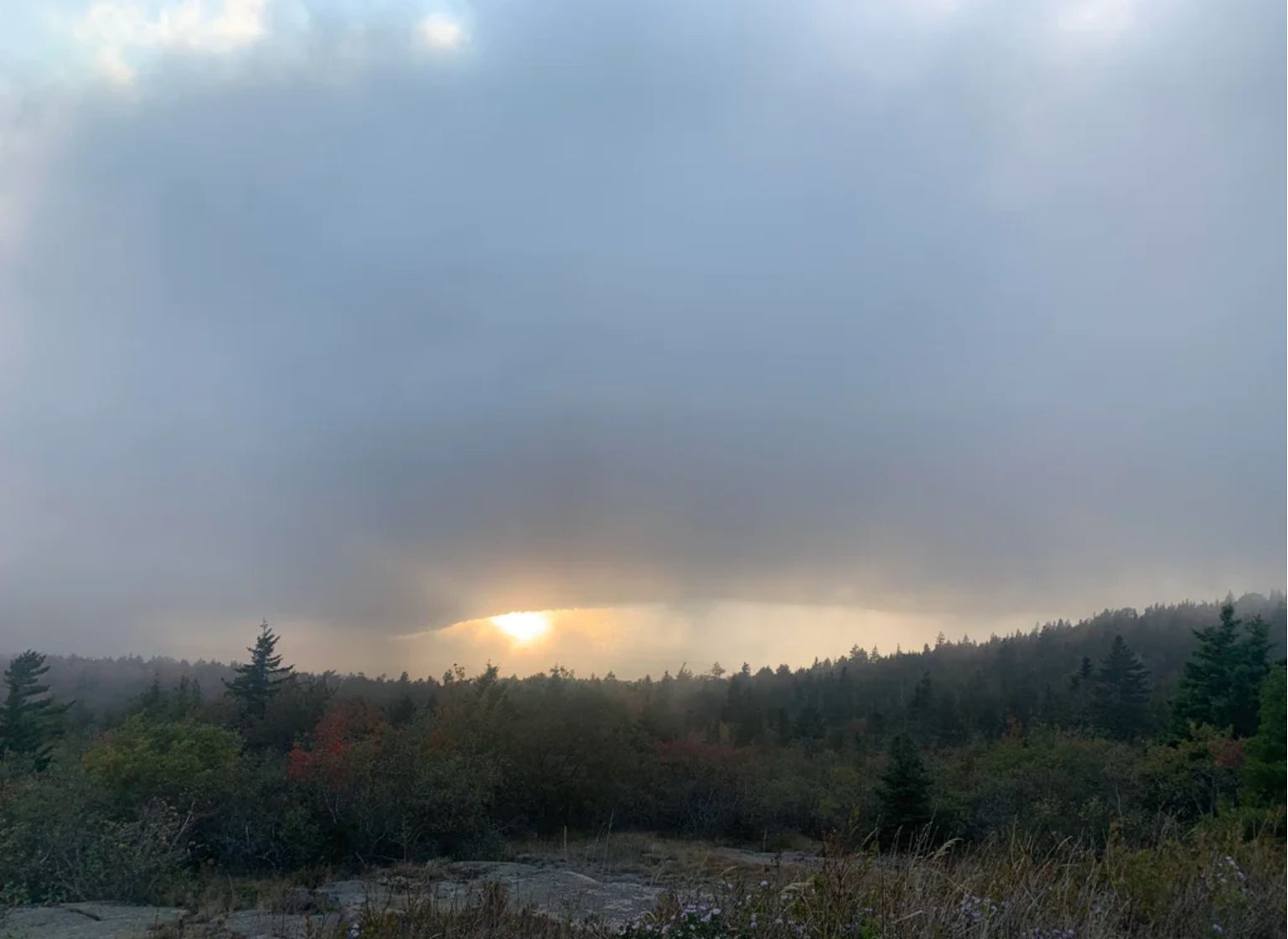 From the looks of it, we're just seeing the sun peek through some clouds.

However, there isn't actually a direct view of the sunlight from this angle. Instead, we're looking at its reflection in a lake that blends in too well with the clouds to be distinguished from them.

12. Although this photo captures a pretty intense lightning bolt, its size is actually the only significant thing about it. 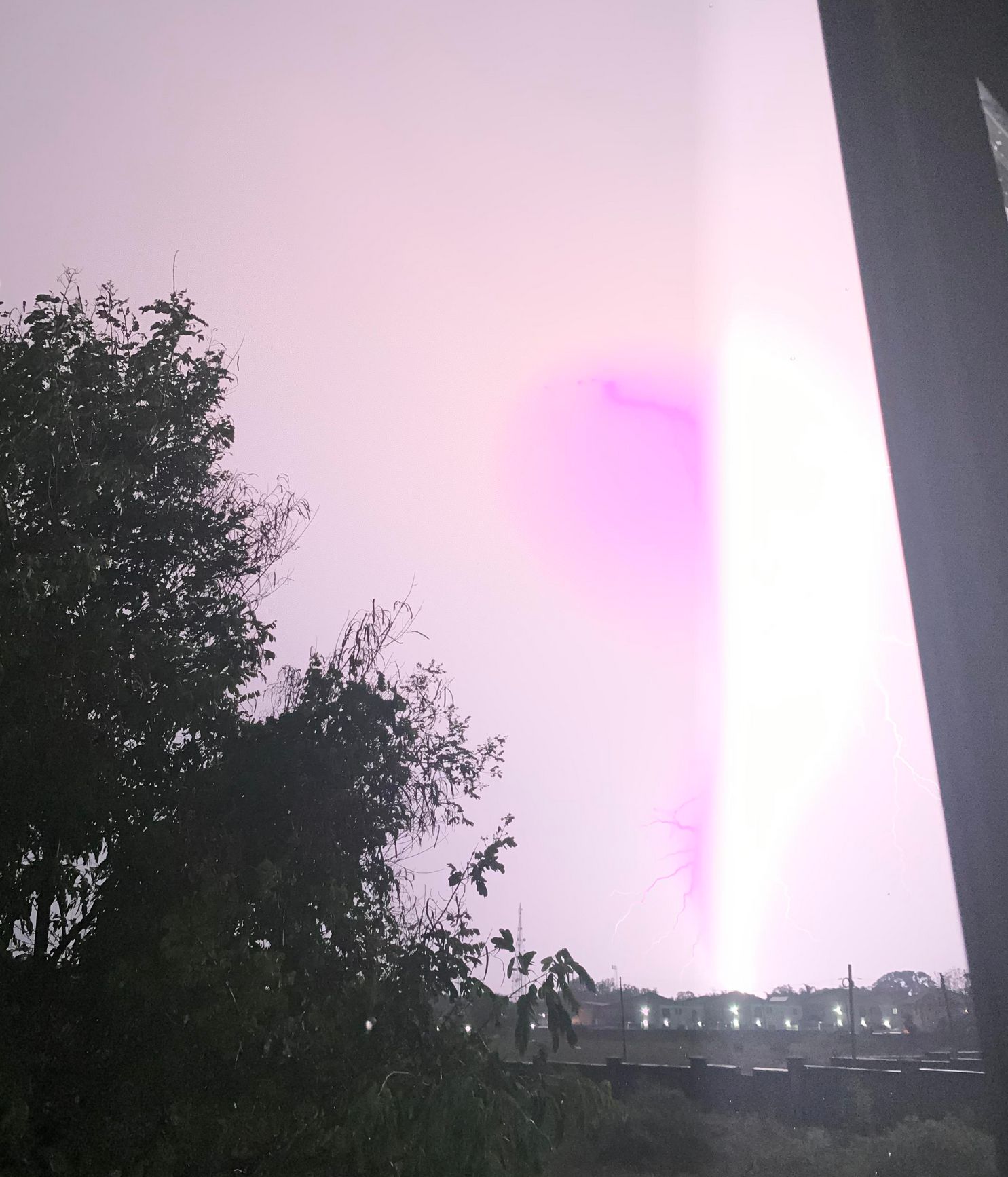 So how did it make the sky so purple? The answer is that it didn't.

As one commenter explained, the uploader's camera simply isn't sophisticated enough to capture what it actually looks like so we ended up with a photo full of visual glitching instead.

It still looks pretty cool, though.

13. Although what's happening in this photo is simple, it's hard to explain it without confusing people further. 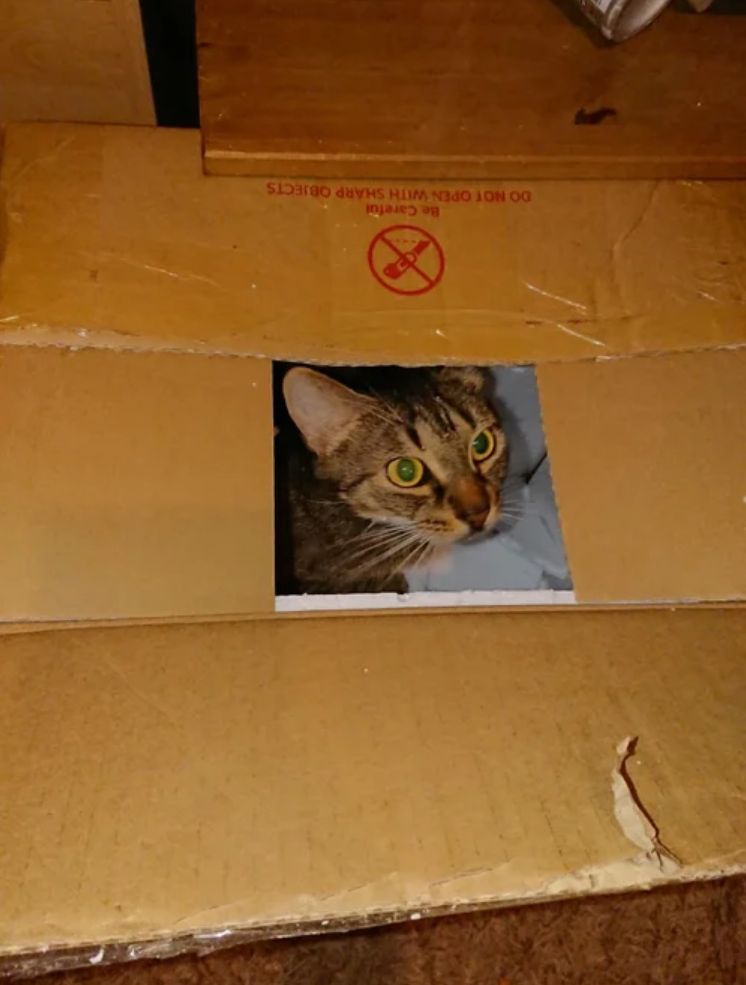 That's because it looks like someone left a Polaroid picture of a cat on a broken cardboard box but we're actually seeing the cat peeking out of a hole in the box.

14. Anyone who tries to pour out the contents of this bowl is going to end up with a louder situation than they bargained for. 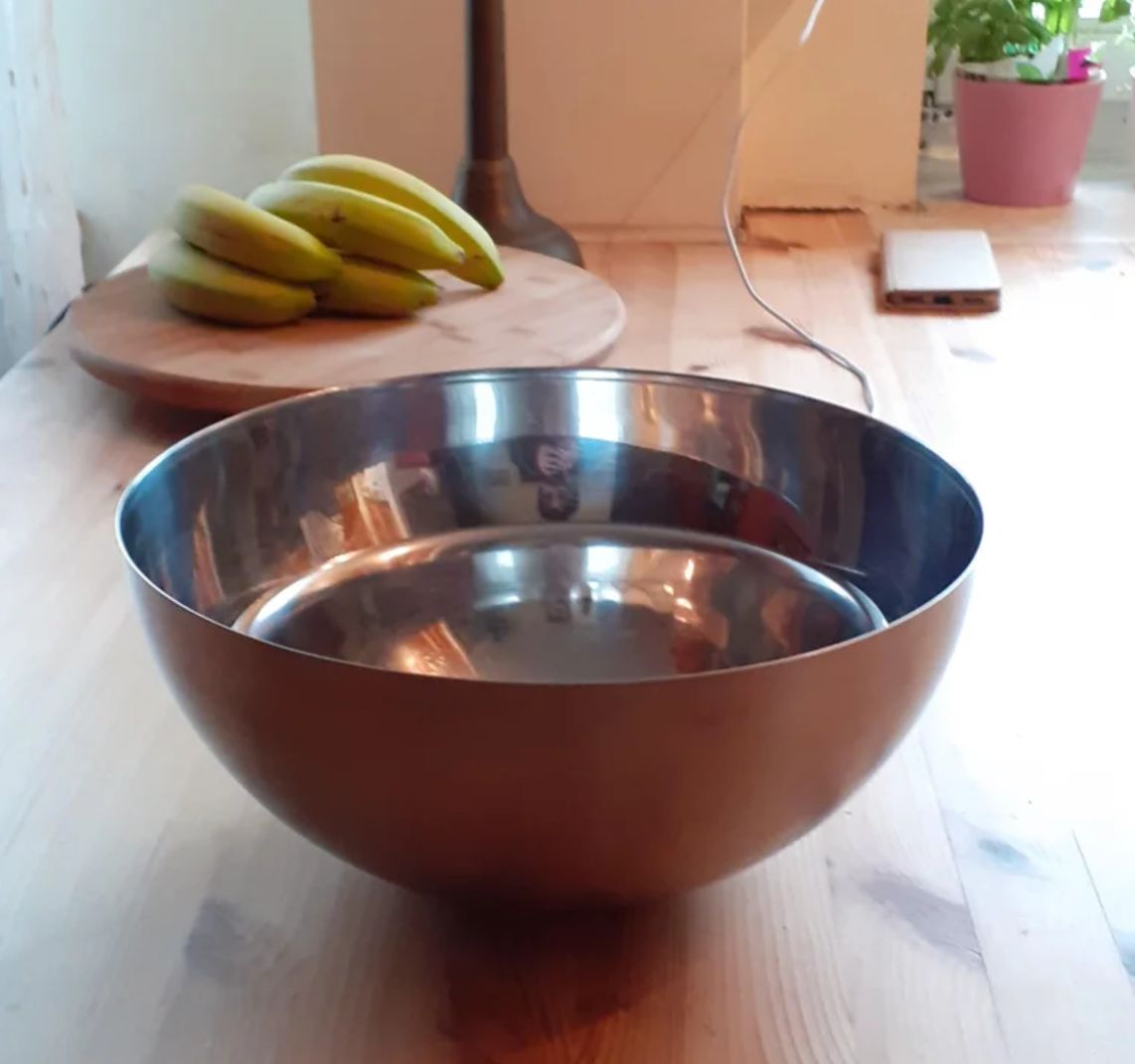 That's because these two bowls stacked together are very easily to mistake for a bowl that's half filled with water.

15. While it's not unheard of for animals to occasionally end up with two heads, that's not what we're looking at here. 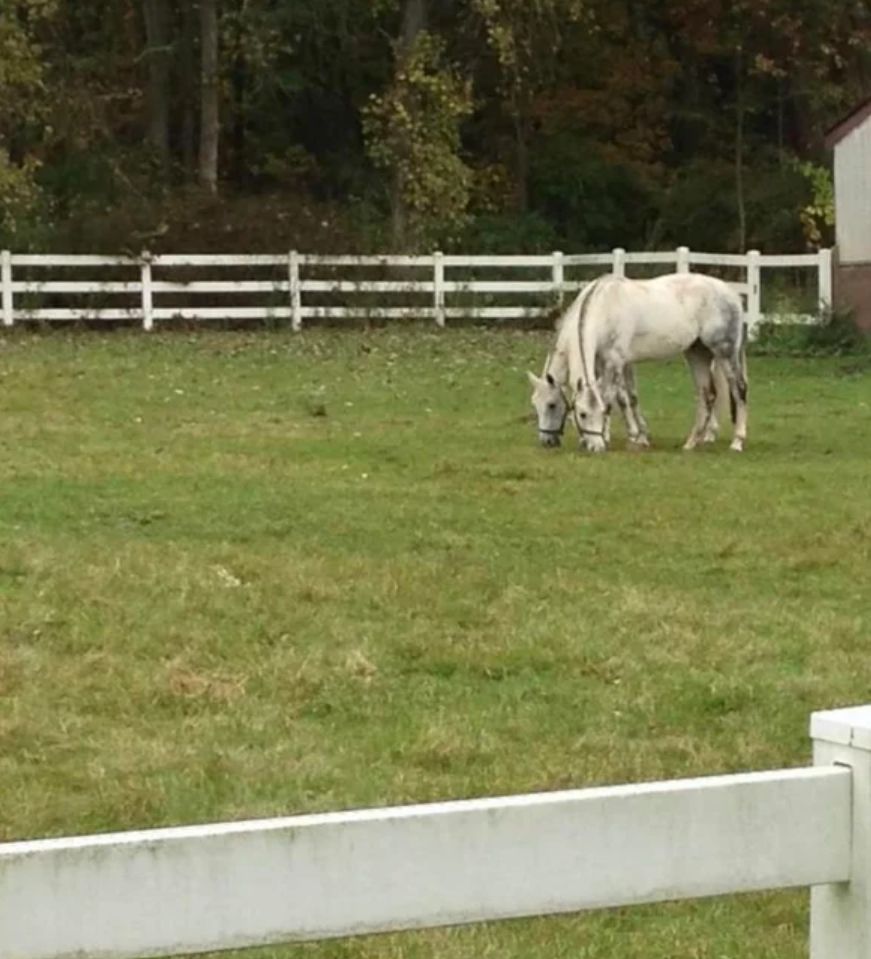 Instead, two very similar-looking horses are grazing close enough together to create that illusion.

And it's a good thing, too because it would likely be pretty hard for the creature to get around with four extra legs.

16. I'm not sure how I'd feel if I woke up to see a giant frog on the power lines outside but I don't have to find out today. 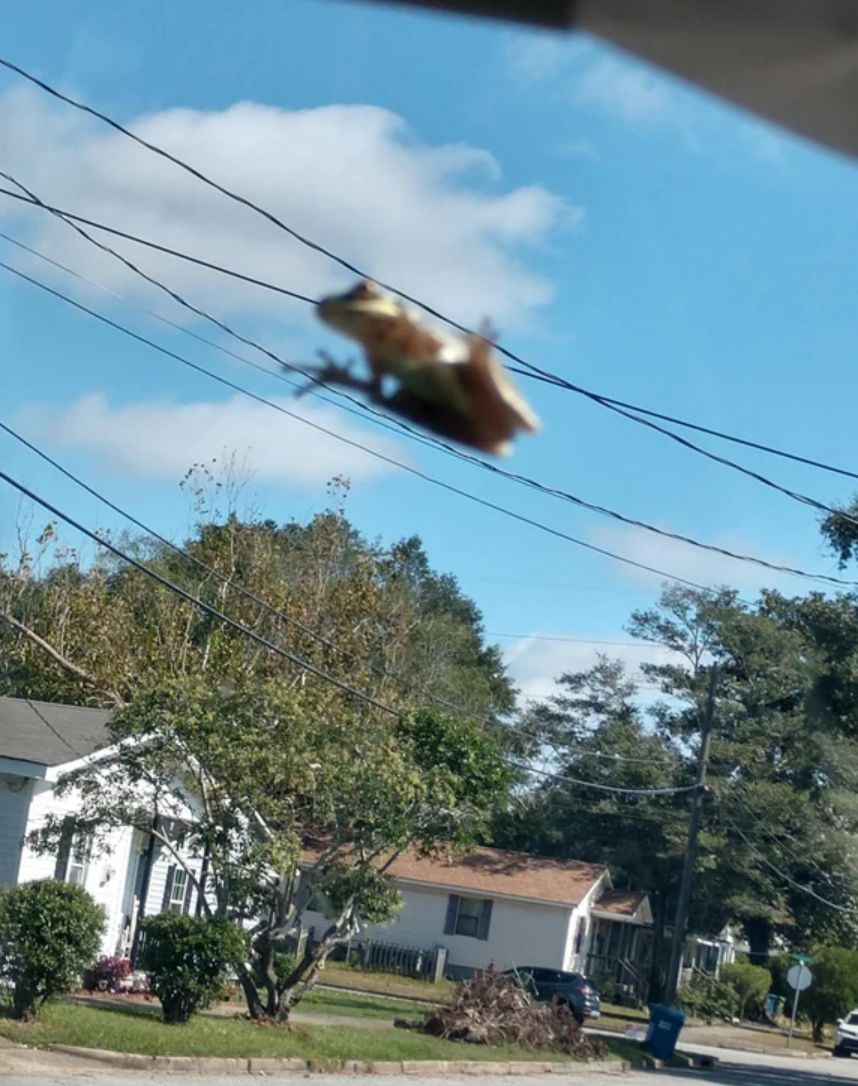 Once again, this is all a matter of perspective. Given how it's positioned, we're likely just seeing a frog chilling on somebody's windshield as they take a picture of it from inside the car.

17. It's perfectly understandable if you see this and think you're looking at a dog and its shadow. 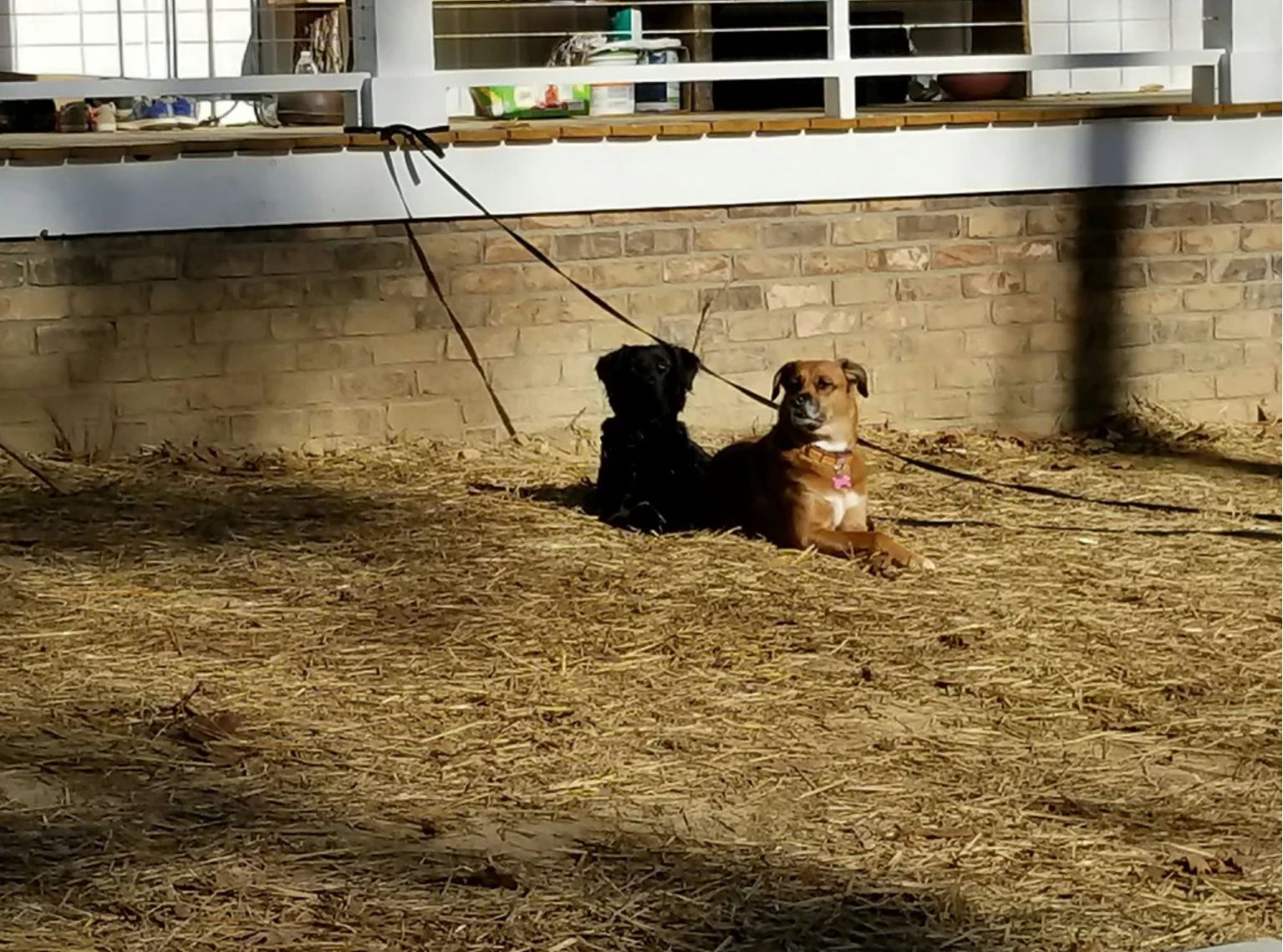 However, it's sitting next to a completely different dog and that little glint in the black dog's eye is the biggest clue indicating that.

18. One of these things is not like the others.

While it's fairly easy to recognize that one of these cats is actually real while the others are images on a blanket, it's a little harder to see that they aren't in the same place.

Unlike the ones on the blanket, the real cat is outside.

19. As the uploader said, "Was cutting down a tree at a golf course and found a golf ball wedged in it." 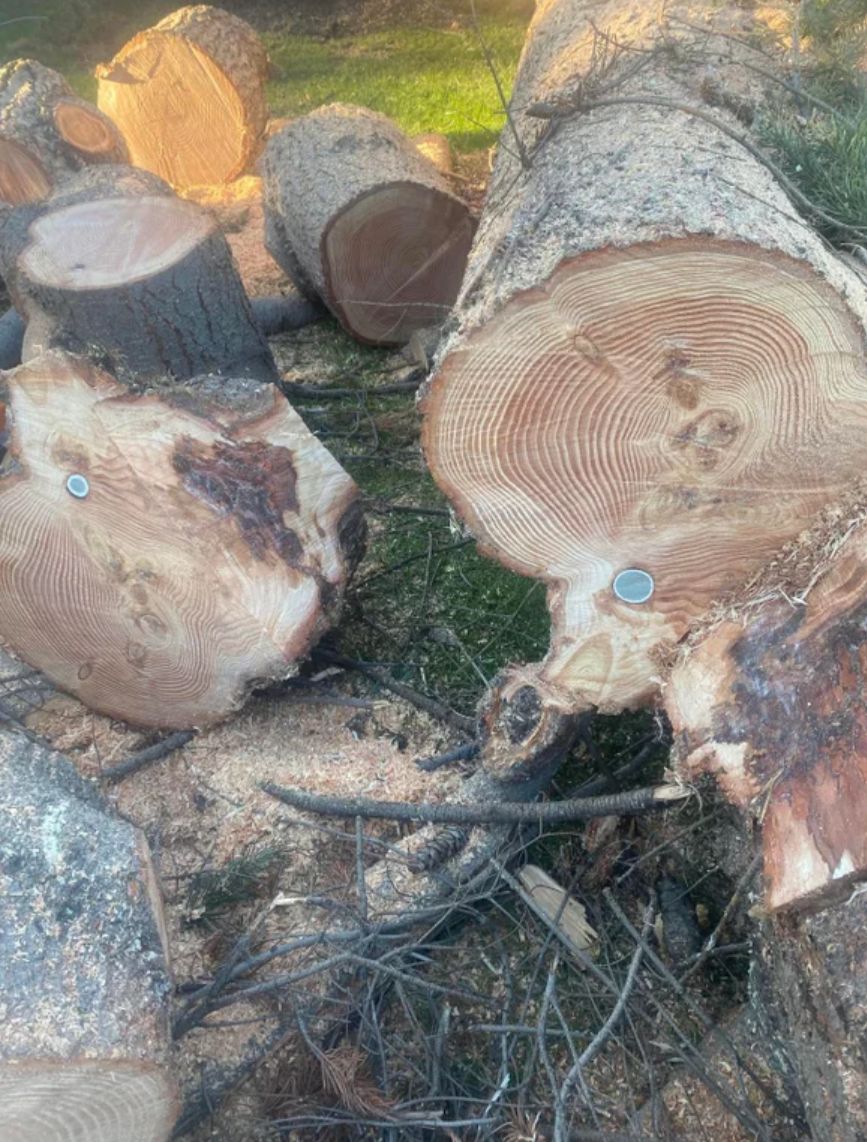 And this photo can be pretty hard to figure out just by looking at it since it doesn't seem like the golf ball didn't have any entry point into this tree.

Not to mention, the strength it would take to do that as a golfer is normally reserved for tornadoes. Instead, it's likely that the ball got stuck among a tree that simply grew around it and absorbed it entirely.

20. This plant life seems almost alien but it's just a common crop growing in an unusual place. 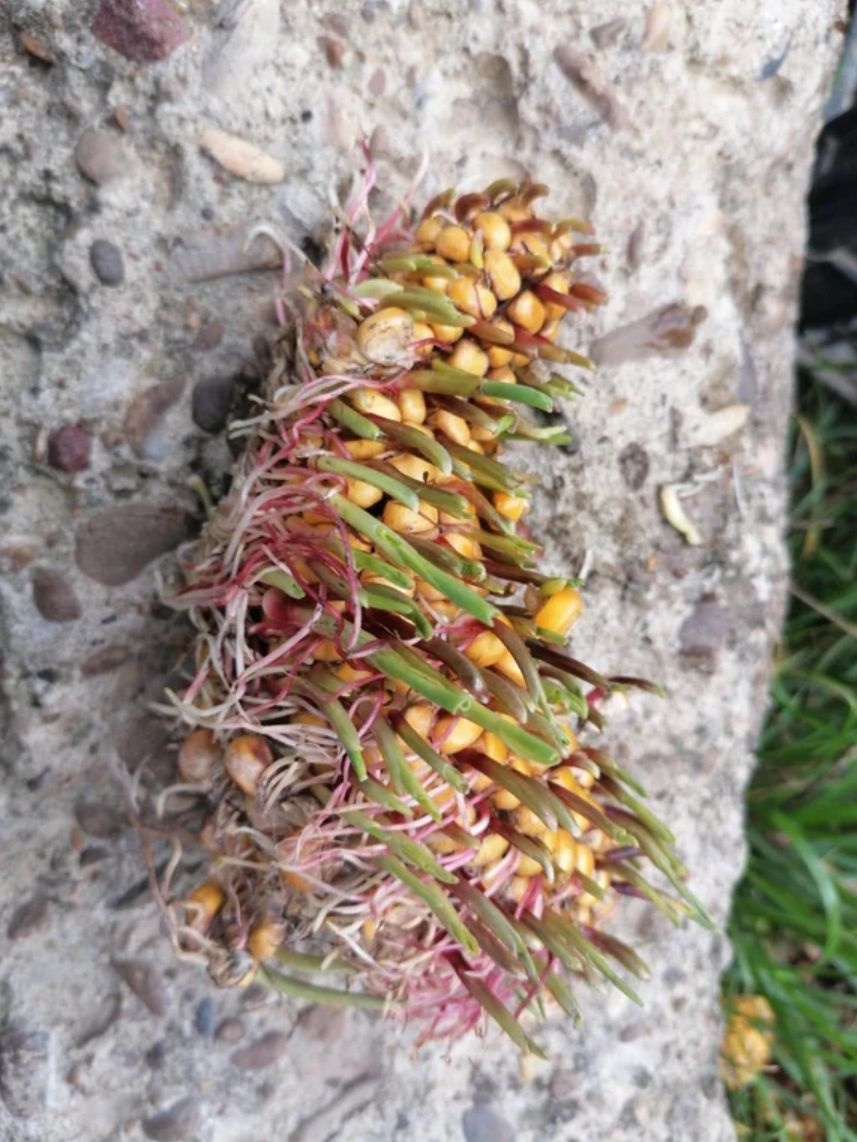 As you might have guessed after looking at all those little yellow pieces, we're seeing some corn grow in the wild.

And since they don't usually grow on rocks, it stands to reason that the plant would end up looking a little weird.