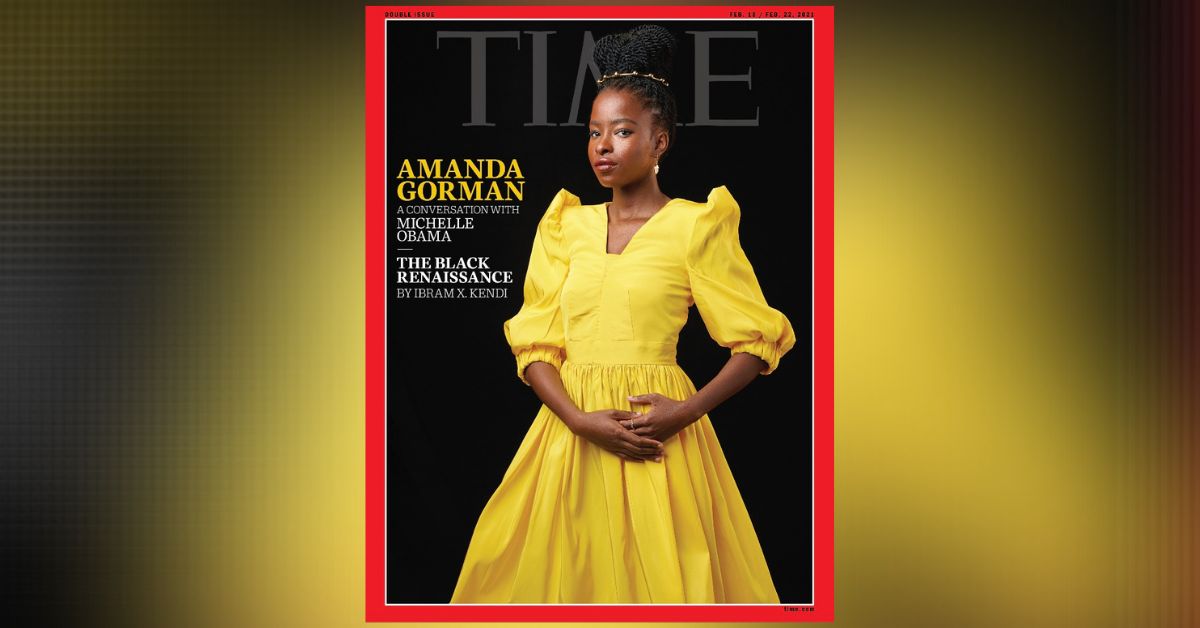 Amanda Gorman, the 22-year-old poet who stunned the world and stole the show with her prose performance at President Biden's inauguration, will now appear on the cover of the upcoming "Black renaissance" issue of TIME magazine.

Gorman, who was also named as the first Youth Poet Laureate of Los Angeles in 2014, was interviewed by former FLOTUS Michelle Obama for her cover story as the pair discussed imposter syndrome, the inauguration, and the role poetry has played in making sense of Black history.

Gorman made history this year when she became the youngest poet to ever perform at an inauguration.

She recited "The Hill We Climb," a 5-minute original piece she penned specifically for the event, which spoke directly to current events and offered a message of hope for America's future:

We close the divide because we know to put our future first.

We must first put our differences aside.

We lay down our arms so we can reach out our arms to one another.

We seek harm to none and harmony for all.

Gorman's powerful words left a lasting impression on Michelle Obama, who has now interviewed the young poet for an upcoming issue of TIME.

Prior to that performance, the two women had actually met twice before — once in 2016 at a White House event for the National Student Poets program, and then again at a 2018 event for Black Girls Rock.

The pair's extensive conversation ranged from the inauguration itself to being a Black woman in the spotlight, and they also delved into how Gorman is handling being hailed as a symbol of hope for the nation.

To begin, Obama asked Gorman where she sees herself fitting in to the current renaissance in Black art, which has surged over the last six years.

She added that she's excited to live in this time and to absorb creations from Black artists she looks up to, but she's also excited that she's able to "create art and participate in that historical record" herself, as well.

Obama shared that no matter how many speaking engagements she's completed, big audiences still trigger a sense of "imposter syndrome" for her.

Gorman admitted she's dealt with similar bouts of imposter syndrome, a person experiences a feeling of not being as competent as others might perceive them to be.

"Speaking in public as a Black girl is already daunting enough, just coming onstage with my dark skin and my hair and my race — that in itself is inviting a type of people that have not often been welcomed or celebrated in the public sphere," the young woman shared, adding that her speech impediment has also lead to serious feelings of self-doubt while speaking publicly.

When asked what role poetry has played in helping her understand Black history, Gorman replied, "Poetry is the lens we use to interrogate the history we stand on and the future we stand for."

"Our instinct is to turn to poetry when we’re looking to communicate a spirit that is larger than ourselves," she continued.

Gorman also shared that she pulled some inspiration for her inauguration poem from Obama's speech at the 2016 Democratic Nomination Convention in which she said, "I wake up every morning in a house that was built by slaves."

As for how she's handling being hailed as a symbol of hope, Gorman admitted she's taking it "day by day."

As she told Obama,

"When you’re first rocketed into a type of visibility, you’re trying to represent your best self without having the best resources... [Black women] are always walking this really tentative line of who we are and what the public sees us as. I’m handling it day by day. I’m learning that 'No' is a complete sentence. And I am reminding myself that this isn’t a competition. It’s me following the trajectory of the life I was meant to lead."

At the end of the interview, Obama asked the poet if she had any advice for young black girls to "earn their way into the spotlight."

Gorman said that while she's currently still learning how to navigate fame and scrutiny herself, it's important to focus on the "big picture."

"You really have to crown yourself with the belief that what I’m about and what I’m here for is way beyond this moment," she continued. "I’m learning that I am not lightning that strikes once. I am the hurricane that comes every single year, and you can expect to see me again soon."