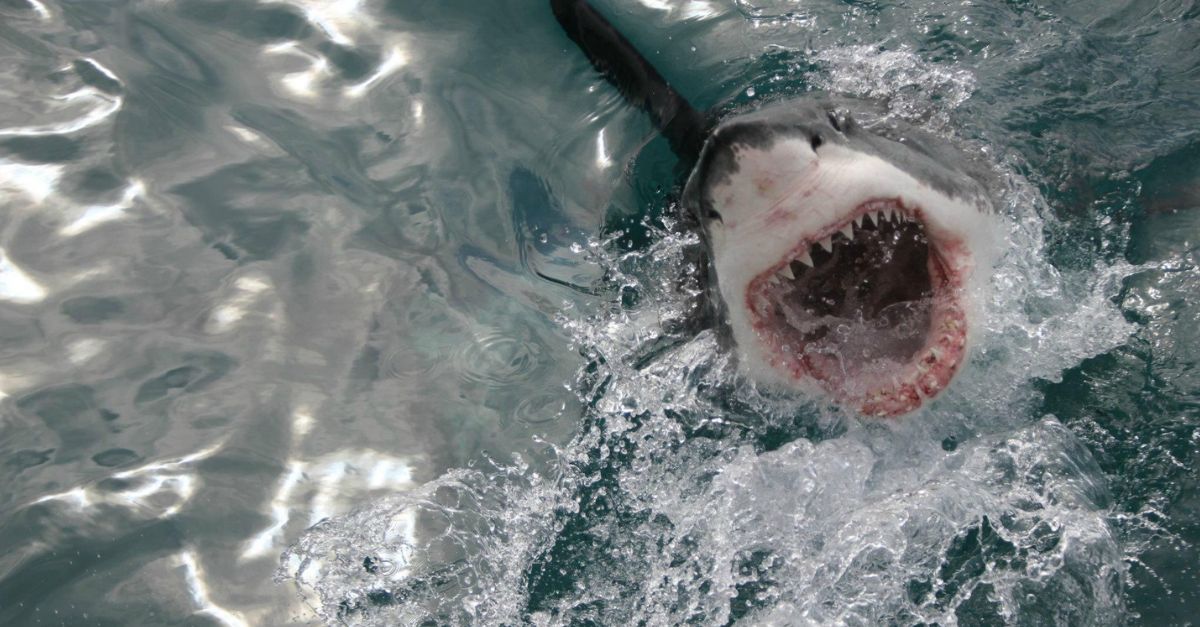 Ever since Jaws came out, it hasn't been terribly difficult to convince people that sharks are terrifying. In fact, that effect has worked a little too well as marine experts in the years since have found themselves having to defend sharks from their fearsome reputation.

And yes, it's true that sharks can be perfectly lovely to be around when they aren't hungry or scared.

However, it's also hard to tell when they'll be either of those things and they have a habit of popping up when we lest expect them. And as we're about to see, they have some raw power to work with when they are.

1. This isn't the type of wave that anybody is trying to surf today. 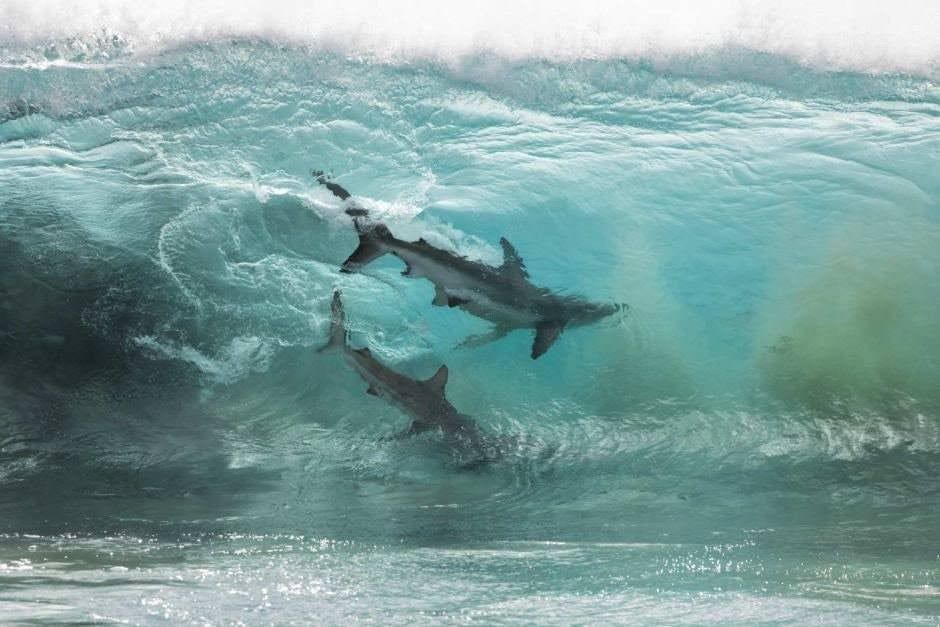 Not being a surfer, I'm actually not all that sure as to whether this would normally be considered a good wave or not.

But even if it's totally bodacious, it's obvious that it's also a little...crowded.

2. If sharks are already intimidating near a bright, beautiful beach, just imagine meeting one in the darker depths. 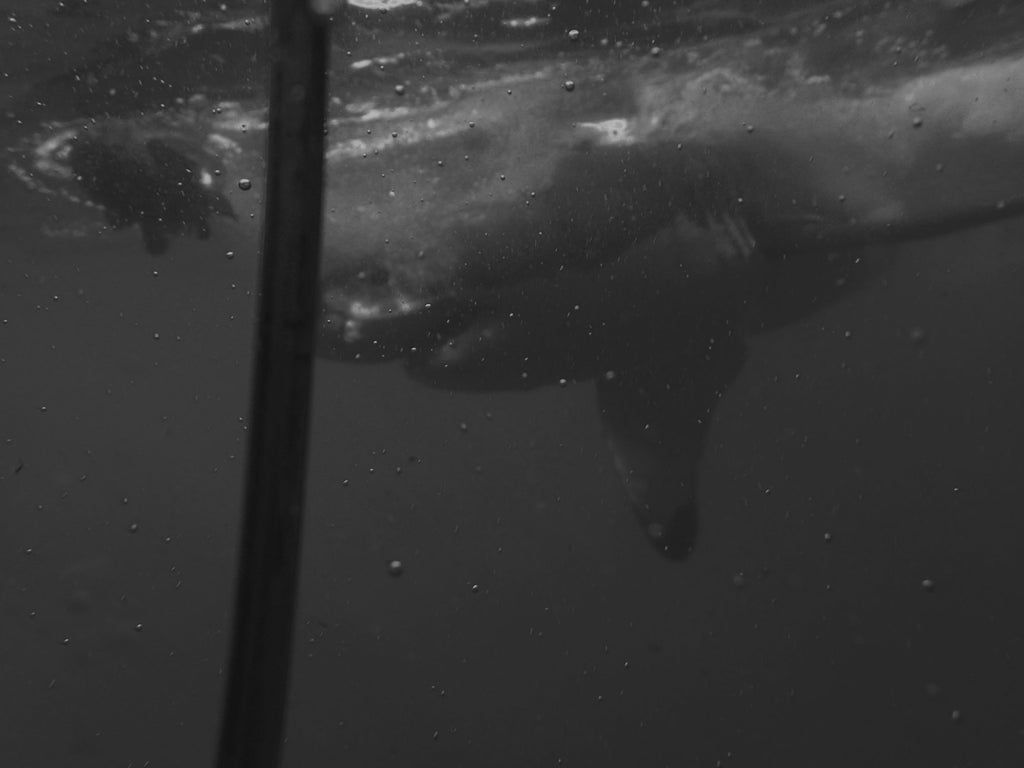 That's exactly what this cage diver is doing, which means they're likely a lot less nervous about seeing a shark in this light than we are.

More power to them.

3. While Australian surfer Mike Fanning was waiting for a competition to start, a shark snuck up on him. 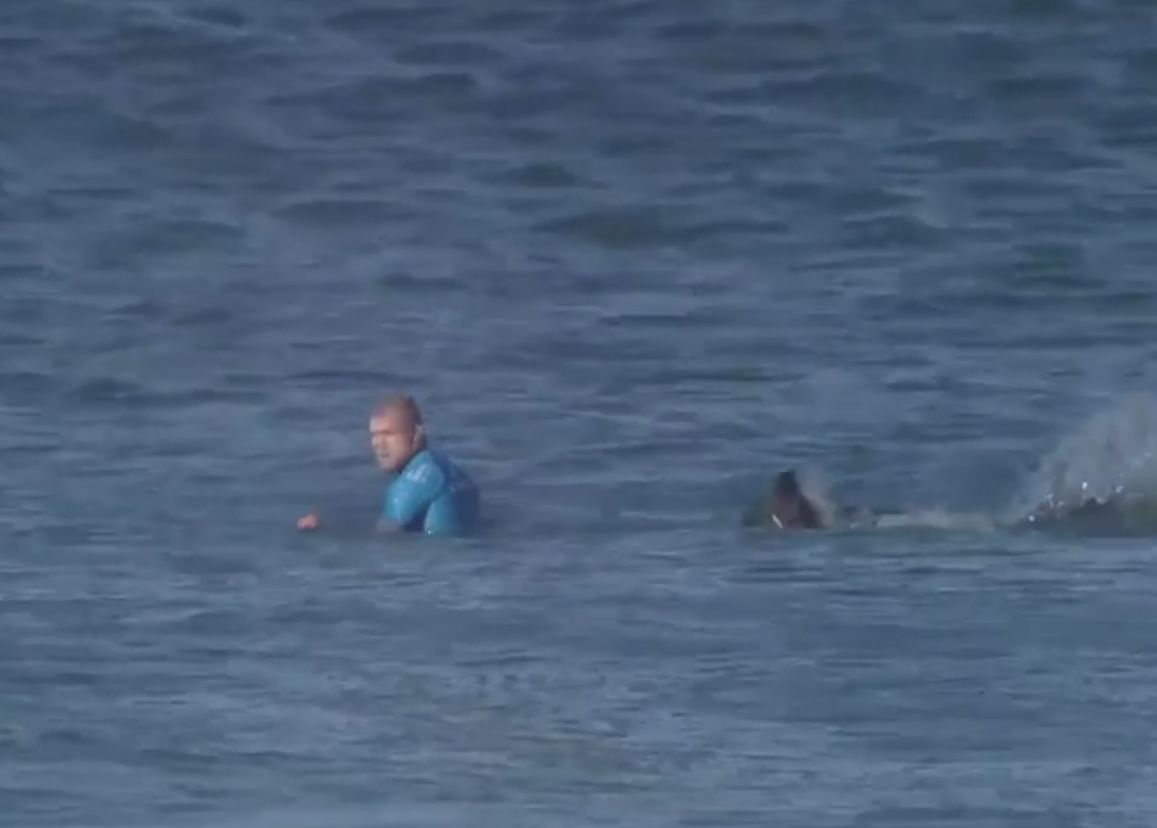 Unfortunately, this wasn't just a friendly pass by the surfer, as then he and the shark soon struggled as it pulled him down.

According to The Guardian, Fanning escaped the shark relatively unharmed after he punched it in the back.

4. Although we're not likely to run into a Greenland shark, it's certainly had the time to meet someone by now. 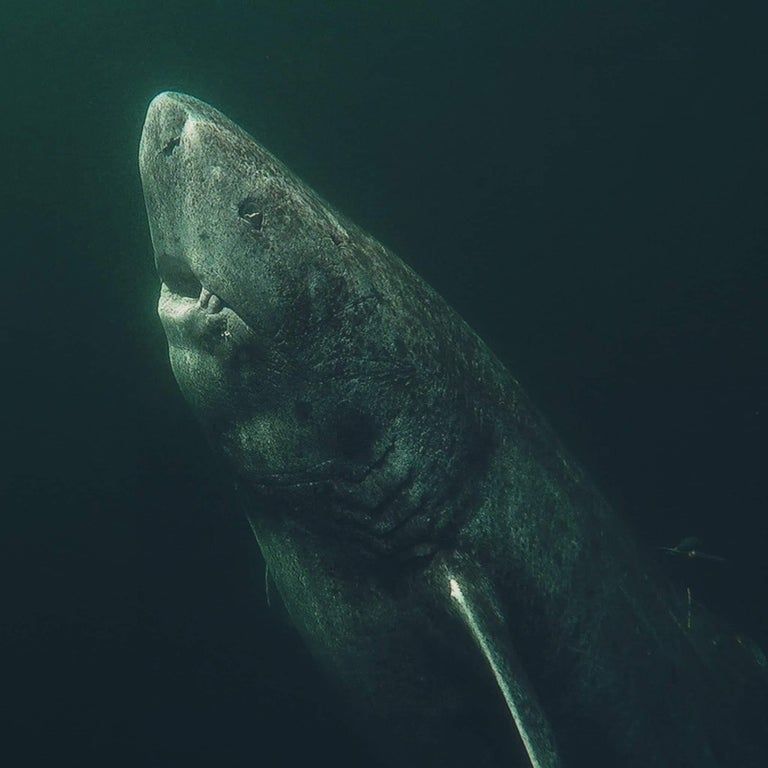 That's because they can live for literally hundreds of years and grow up to 16 feet in length.

According to the BBC, the oldest living example of this shark could be about 400 years old.

5. It's hard to tell what's going on in this picture, which makes it a little easier to understand this swimmer's situation. 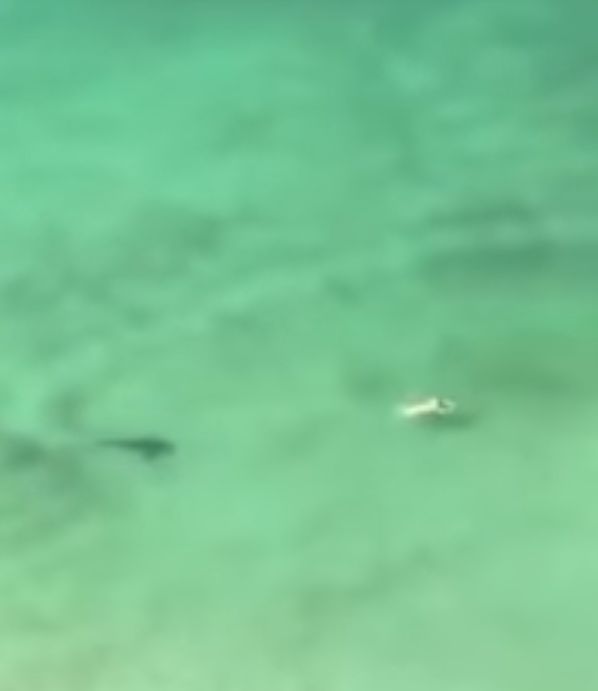 They were swimming along for several minutes without knowing that the shark swimming around them was anywhere close.

However, as soon as they noticed the beast shown at left in this photo, they turned around and headed in the opposite direction. The curious shark kept following, though.

6. Although we can't see it too clearly, this photo shows a great white shark eating a hammerhead. 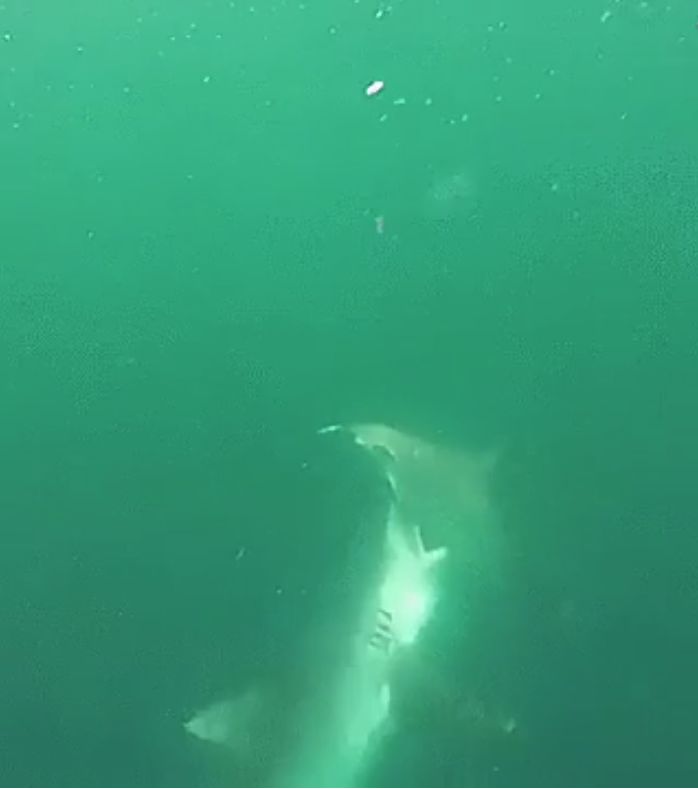 At this point, the struggle is very much ongoing, as the hammerhead isn't too enthusiastic about becoming dinner.

It won't keep up for long, though.

7. Surface tension has a way of making anyone look otherworldly, so imagine what it does to sharks. 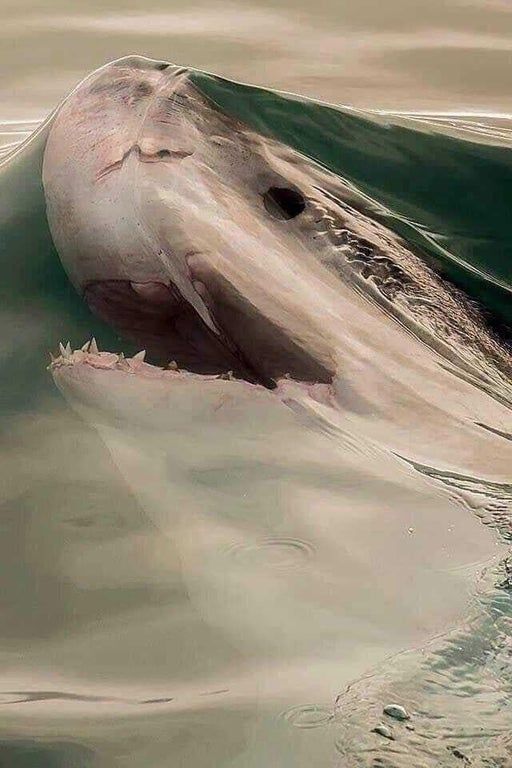 That said, for as crazy as this warping reflection appears to us, it also makes the shark look pretty happy. So that's nice.

8. When we see a shark catch a meal, we get a clear glimpse of both how majestic and how terrifying it can be. 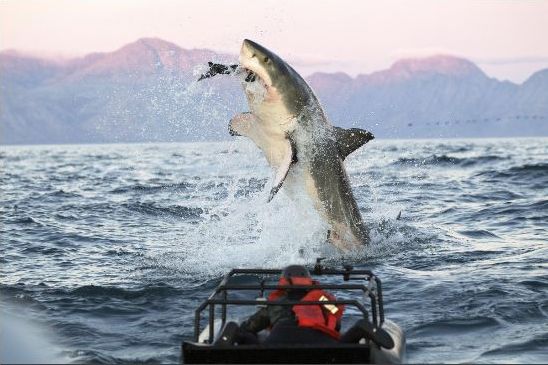 Free Willy definitely would have taken on a totally different tone if he was tearing a seal apart while making his famous leap.

9. Since it's so shrouded by the wave, it's difficult to tell whether there's a shark or a dolphin in this picture. 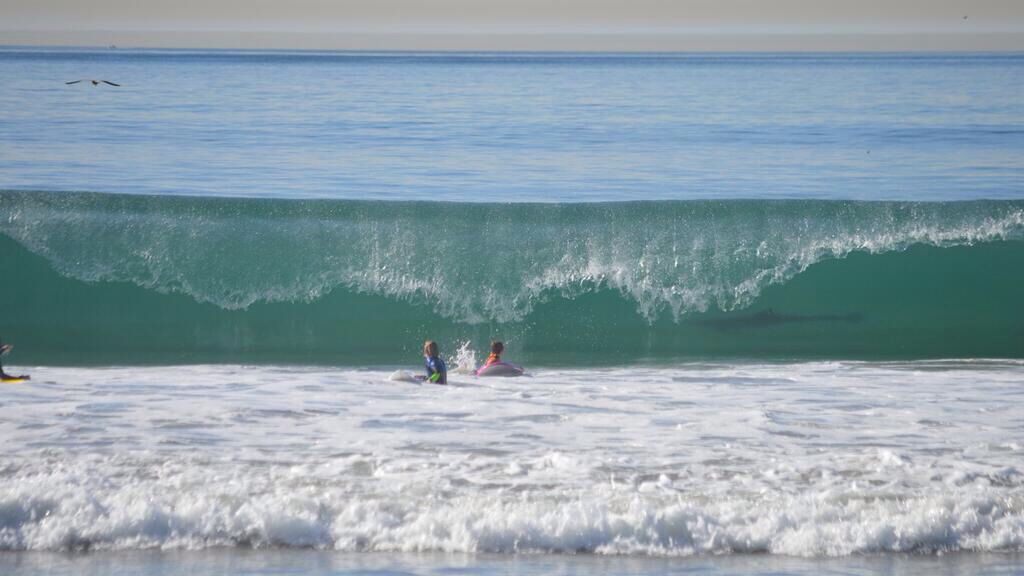 Either way, it probably makes for an obstacle that these surfers would likely rather see now than when they're trying to do their thing.

10. If anything makes people nervous about sharks more than their size or teeth it's their tendency to take their prey by surprise. 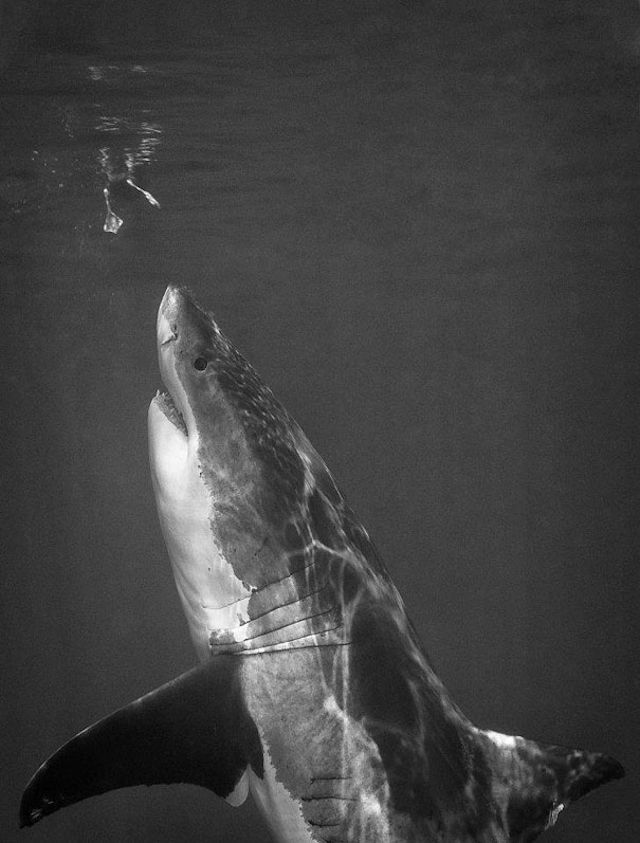 In this case, we've got a seagull who's as woefully oblivious to this shark's intentions as we are when the gulls try and steal our ice cream cones.

11. This was likely a scene that this 10-year-old's parent hadn't noticed at the time because it's about as harrowing as it gets. 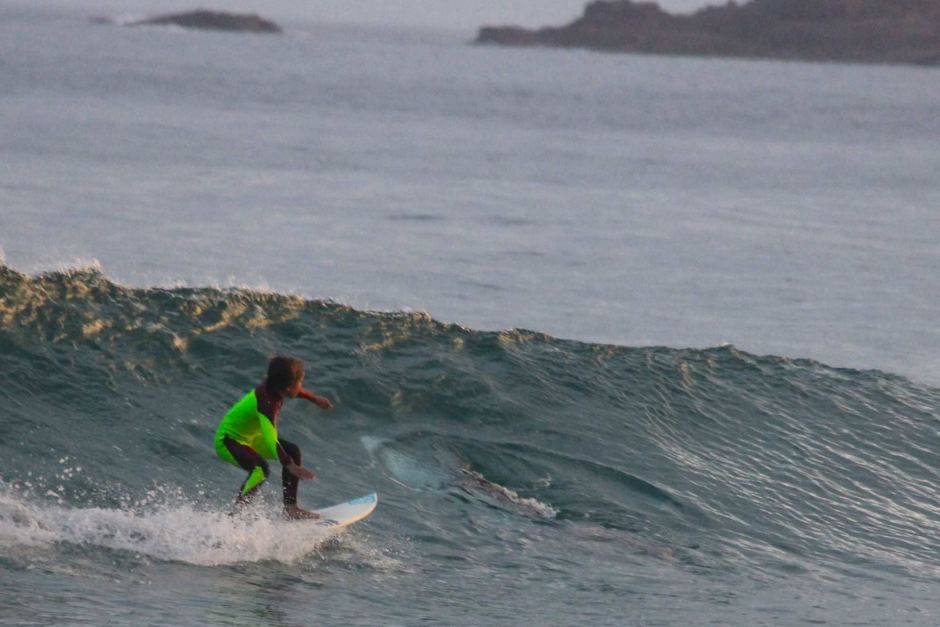 It's a little tough to make out, but the child is apparently surfing very close to a great white shark.

However, the main consolation here, as marine biology professor Danny Bucher told the Australian Broadcasting Corporation, is that the shark seemed to be trying to swim away based on the way it had rolled onto its back.

12. This image makes it startlingly clear how close this seal was to being a main course. 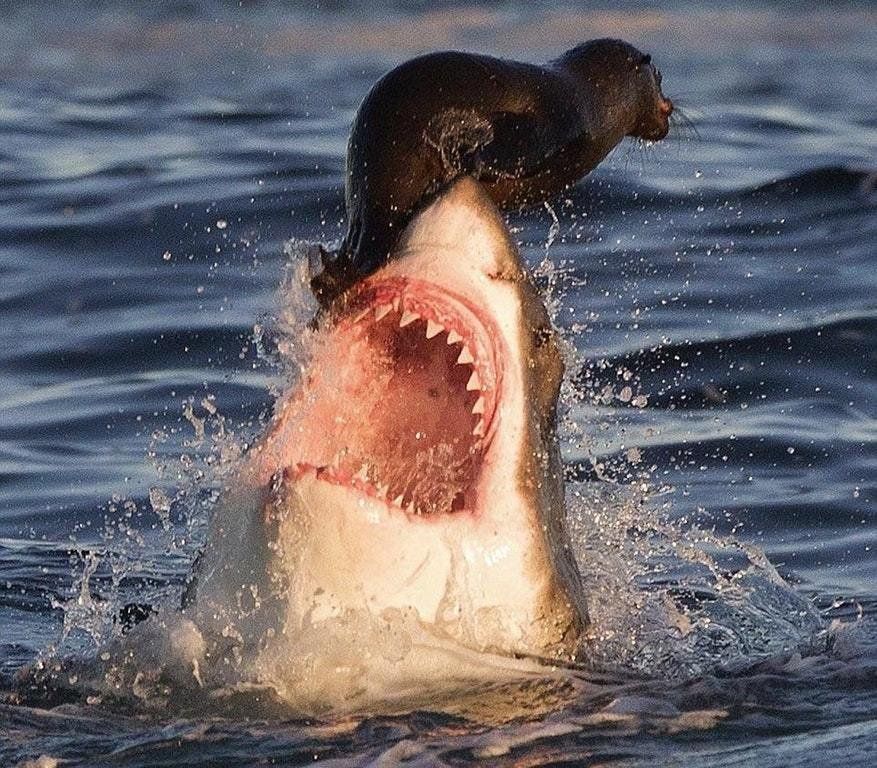 Either it moved slightly out of position or the shark's aim was off that day, because the would-be prey ended up feeling the brunt of its nose, rather than it teeth.

Even that would probably hurt a lot, by the way.

13. Unfortunately, sharks aren't any less intimidating from below as the are from above. 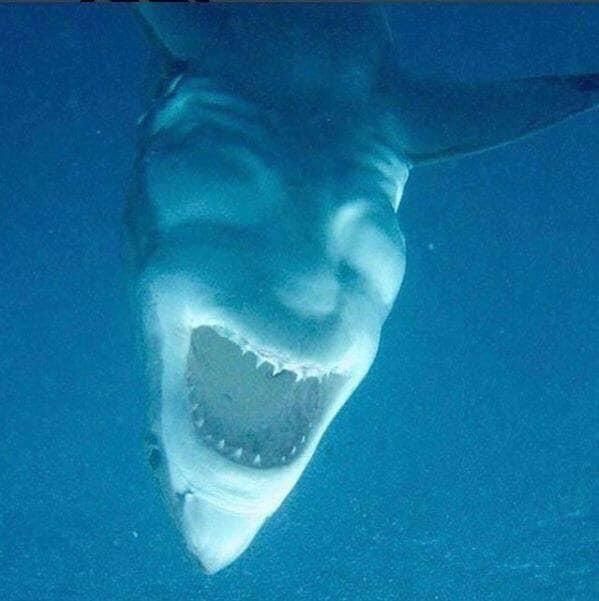 Indeed, their undersides almost look like an entirely different face that seems a lot more devilishly gleeful about eating you.

14. Here we have more hammerhead sharks than most of us would want to meet at once. 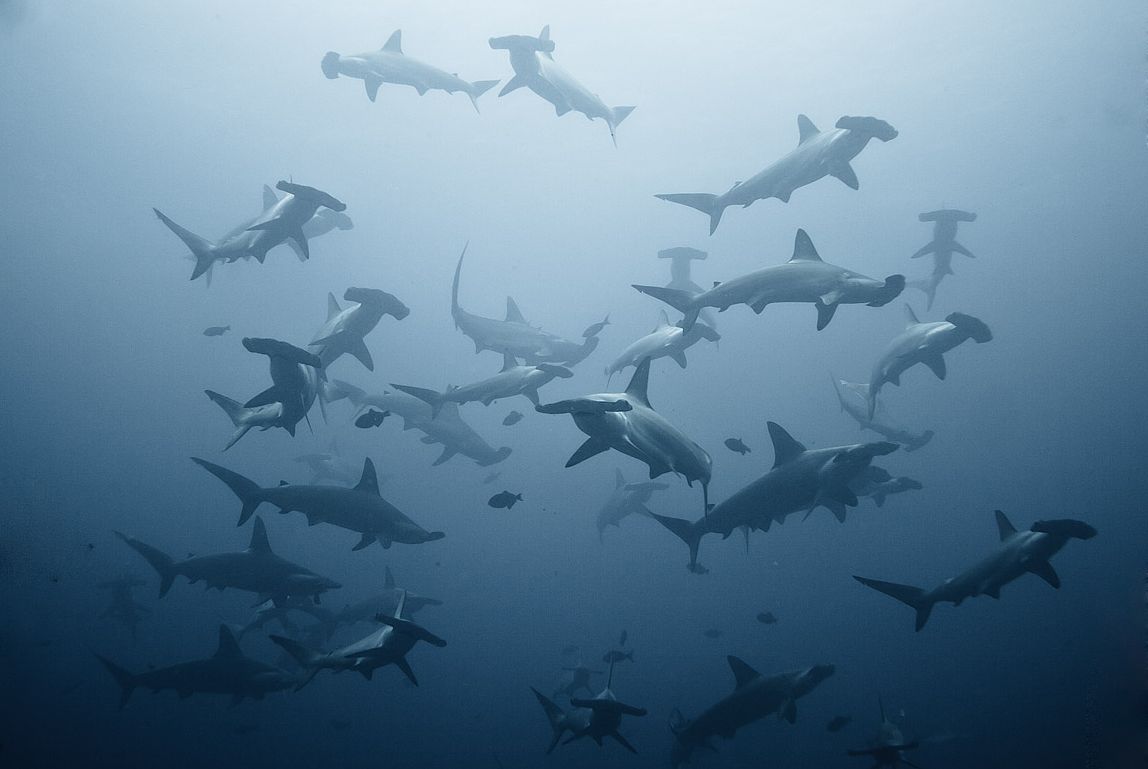 Still, they seem to be getting along relatively well and there seem to be some fish that are brave enough to hang around them.

15. Although this shark is as large and up close as some of the others we've seen, it doesn't look all that excited. 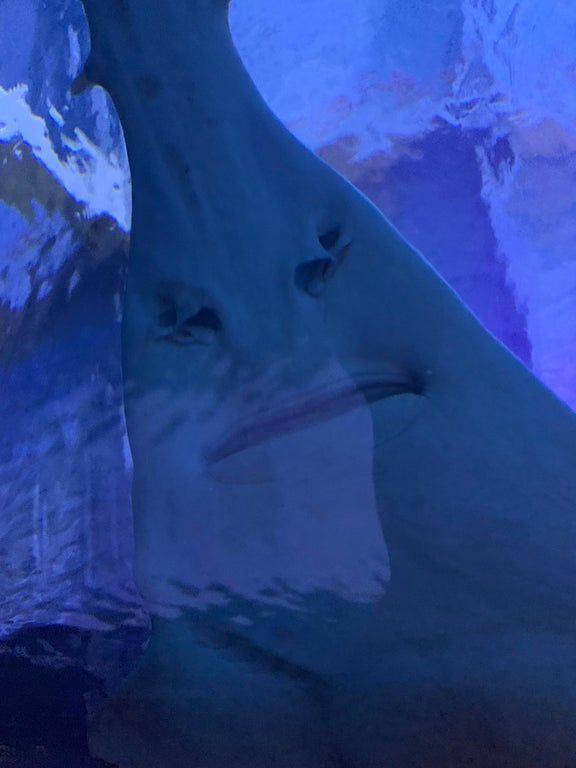 You know in cartoons, someone will try and convince a ravenous beast not to eat them because they taste terrible or they're barely a snack?

This very disappointed-looking shark seems like it came to that conclusion on its own.

16. This is not the kind of photobomb many of us would want when we're having fun scuba diving. 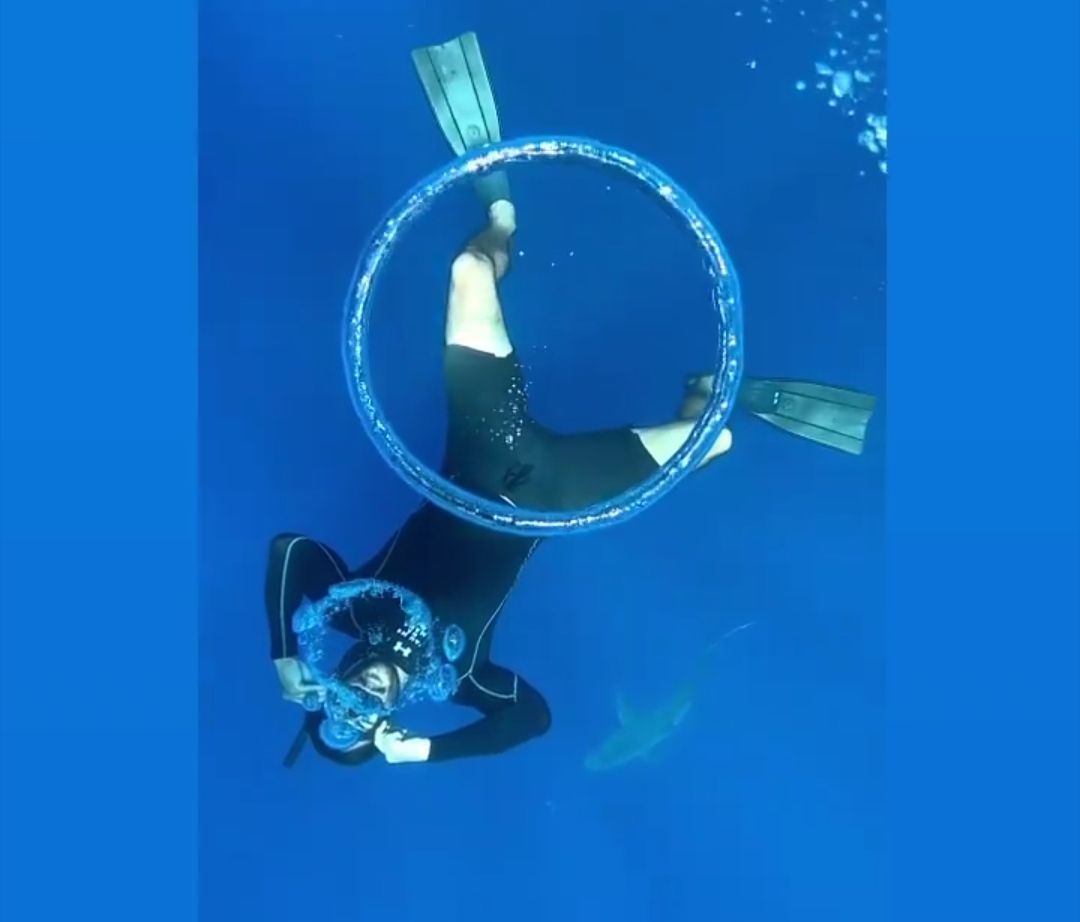 Considering how subtly that shark is passing through the water, it's pretty easy to see how they can sometimes take people by surprise.

17. This is definitely a case where we'd want to make sure our hold on whatever ledge this was taken from is nice and sturdy. 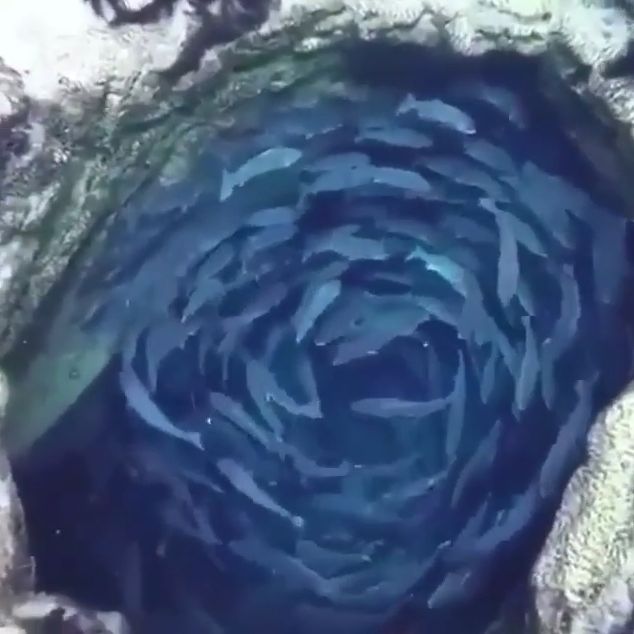 After all, a fall from that fight would leave us at a major disadvantage at the best of times. A fall that surprises this many sharks, however, is almost guaranteed to be a bad time.

18. It's kind of hard to recognize them because of their size, but these are gills. 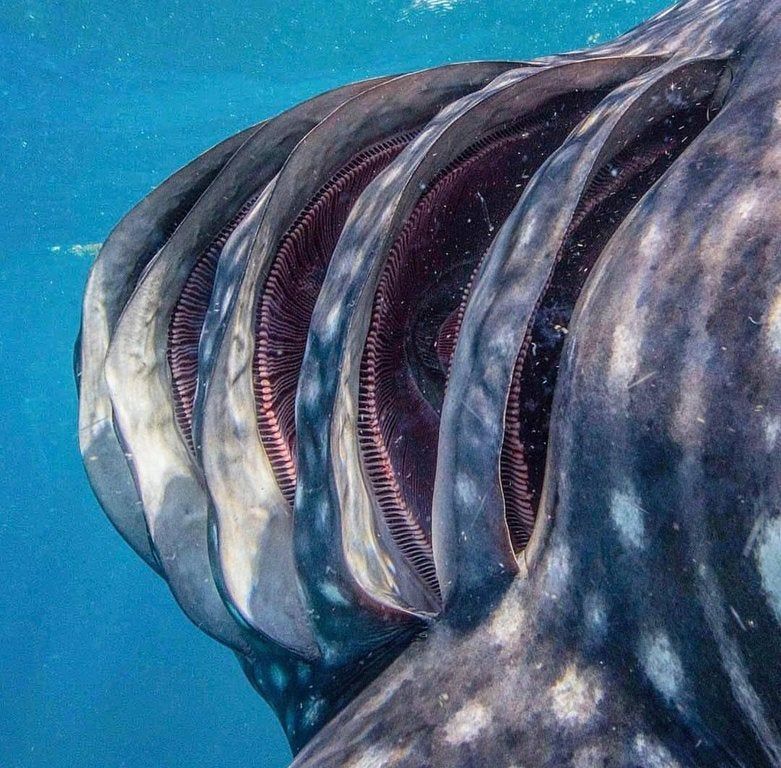 More specifically, they're the gills of a whale shark and make it look more like some massive machine than a big fish.

19. These graceful leaps out of the water look a lot more majestic when we aren't the ones in its mouth. 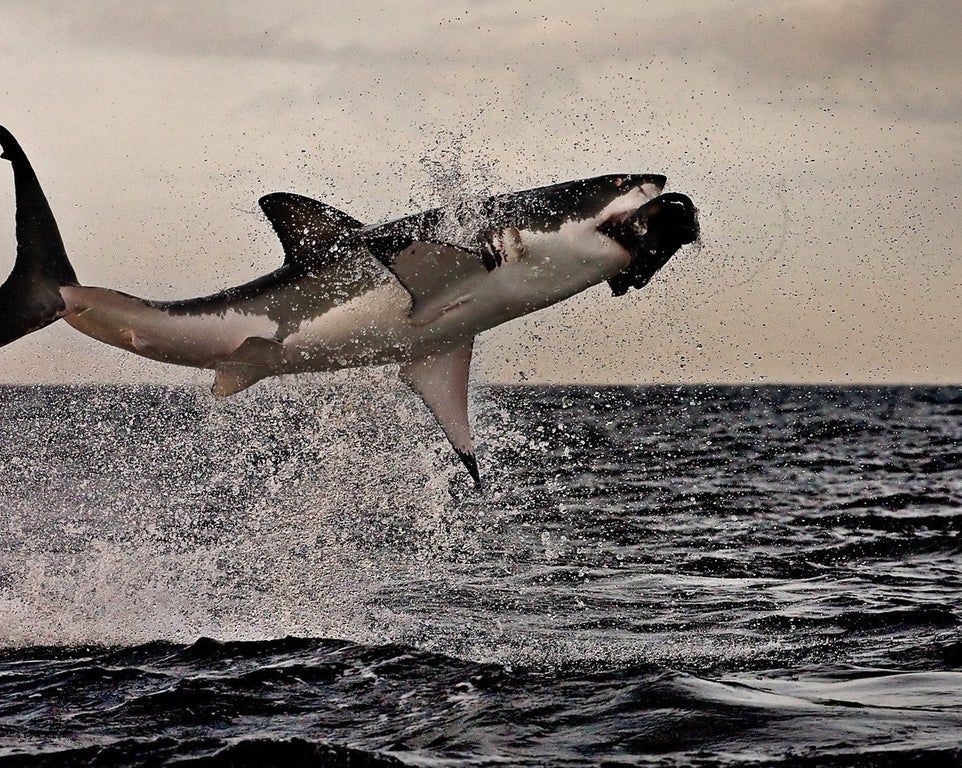 It's pretty hard to tell what this shark is even munching on, but that's not going to matter in a moment or two.

20. If this looks like someone's collection of shark teeth, you're close, but not quite there. 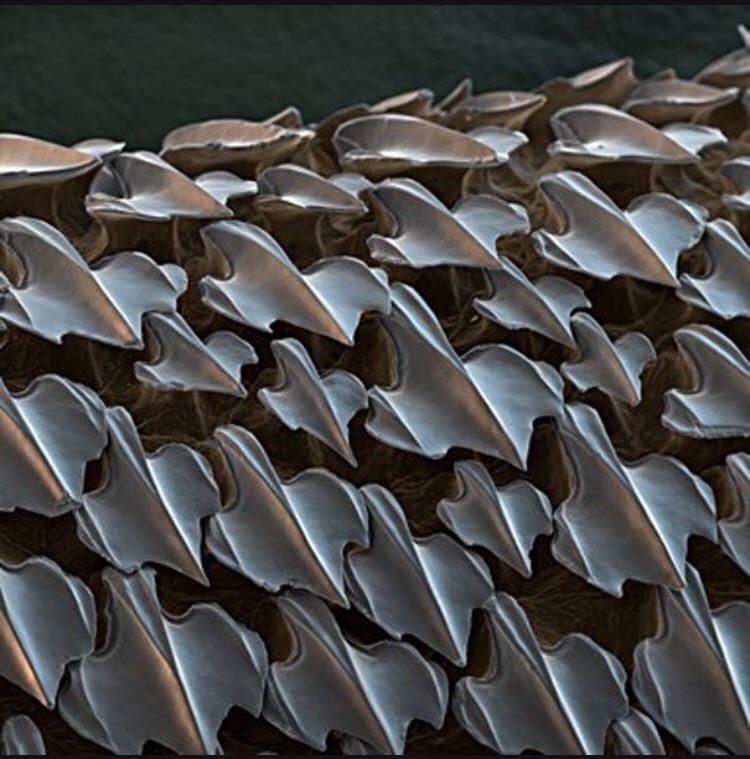 This is actually what shark skin looks like under a microscope and the reason why you're so close is that this type of skin is known as dermal denticles, or skin teeth.

That thing where you get cut if you rub a shark's skin the "wrong" way is a myth, though. You'll get some road rash at worst, unless the shark bites of course.

21. A lot of have a healthy enough respect for sharks to keep our distance and we're not the only ones. 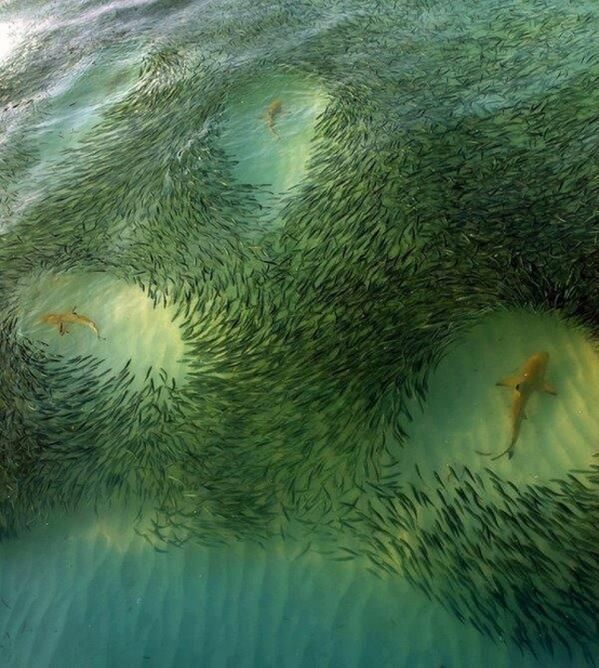 As we can see from this photo, even other fish know to give them a nice, wide berth.

22. The Port Jackson shark may look unnerving and fearsome, but if you could do a lot worse if you have to run into a shark. 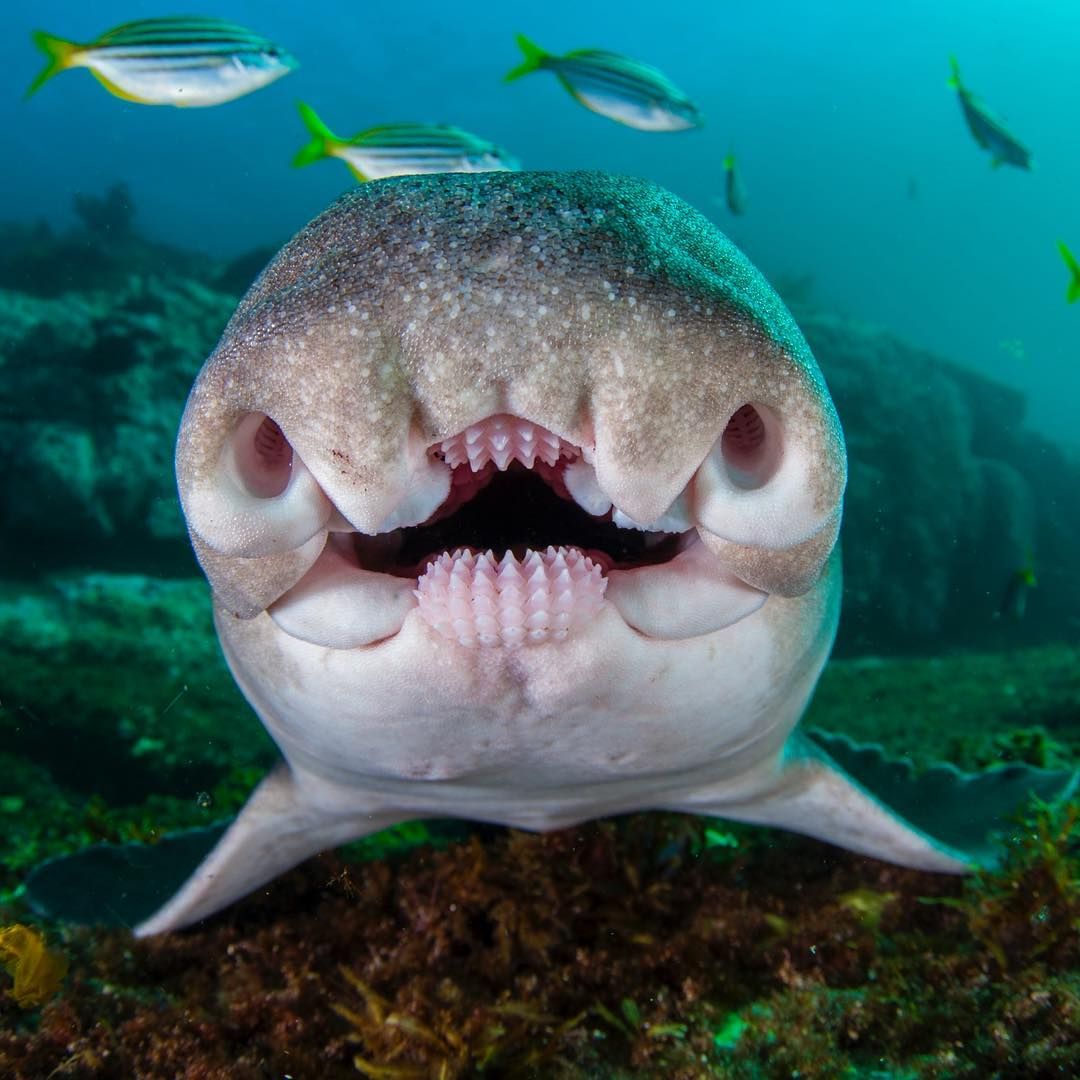 As long as you can avoid getting jabbed by the spines around their dorsal fins, they're reputed to be relatively harmless.

23. Part of what makes sharks so impressive and intimidating is how efficient they can be. 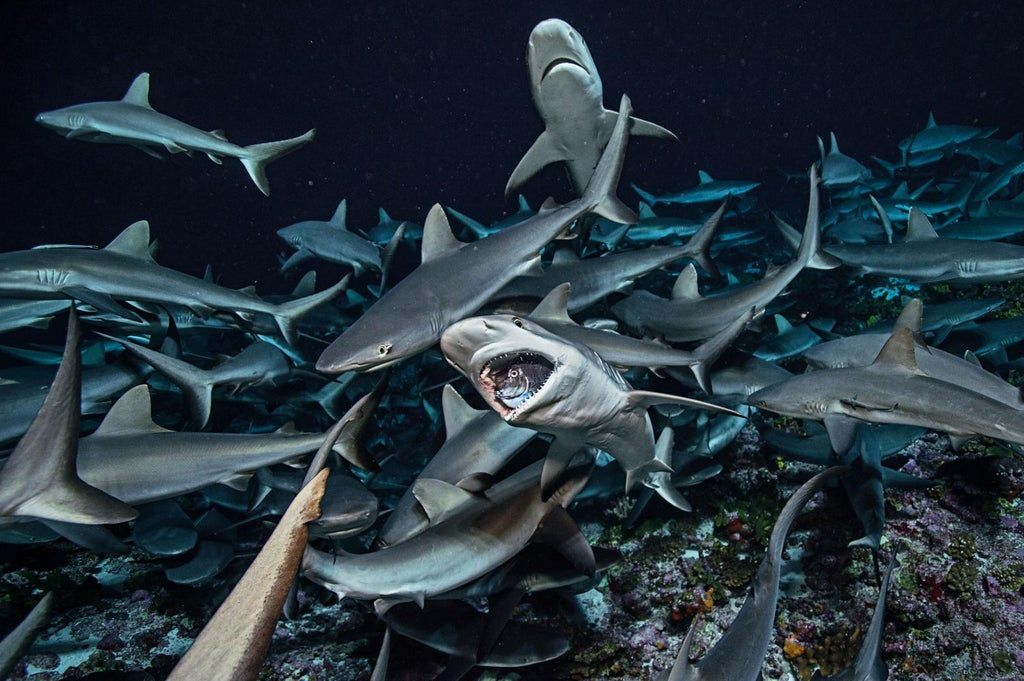 For instance, this fish is about to be eaten, but its face makes it seem like it's just starting to become aware of what's happening to it when it's already halfway down the shark's throat.

24. The uploader said they have a deep fear of sharks, so they should definitely be commended for keeping the camera steady. 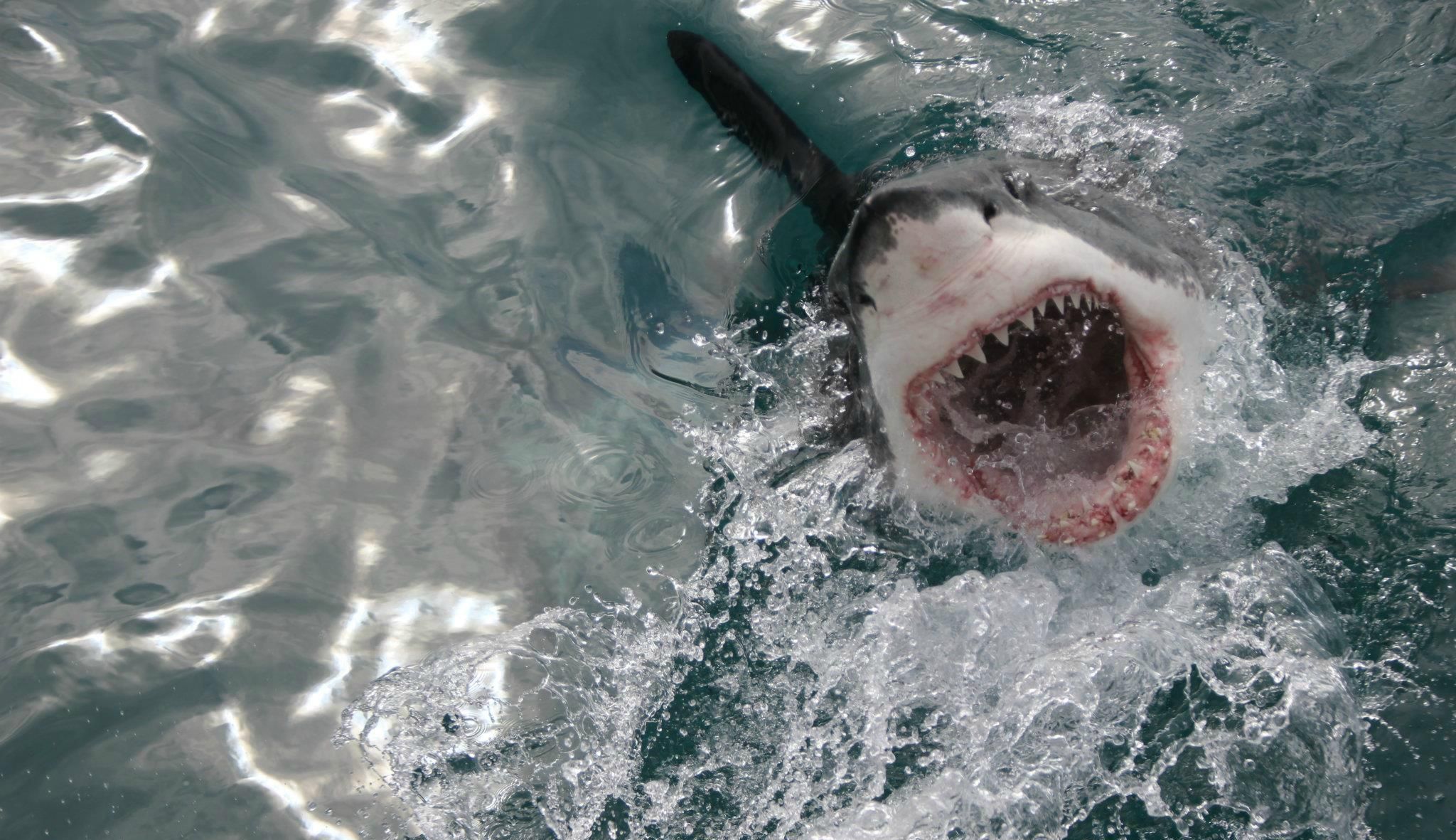 After all, their fear is probably just as deep when it's not baring its teeth and looking very angry so they must be about to explode right now.

25. The goblin shark isn't particularly soothing to behold at the best of times, but we haven't seen the half of how unnerving it can be. 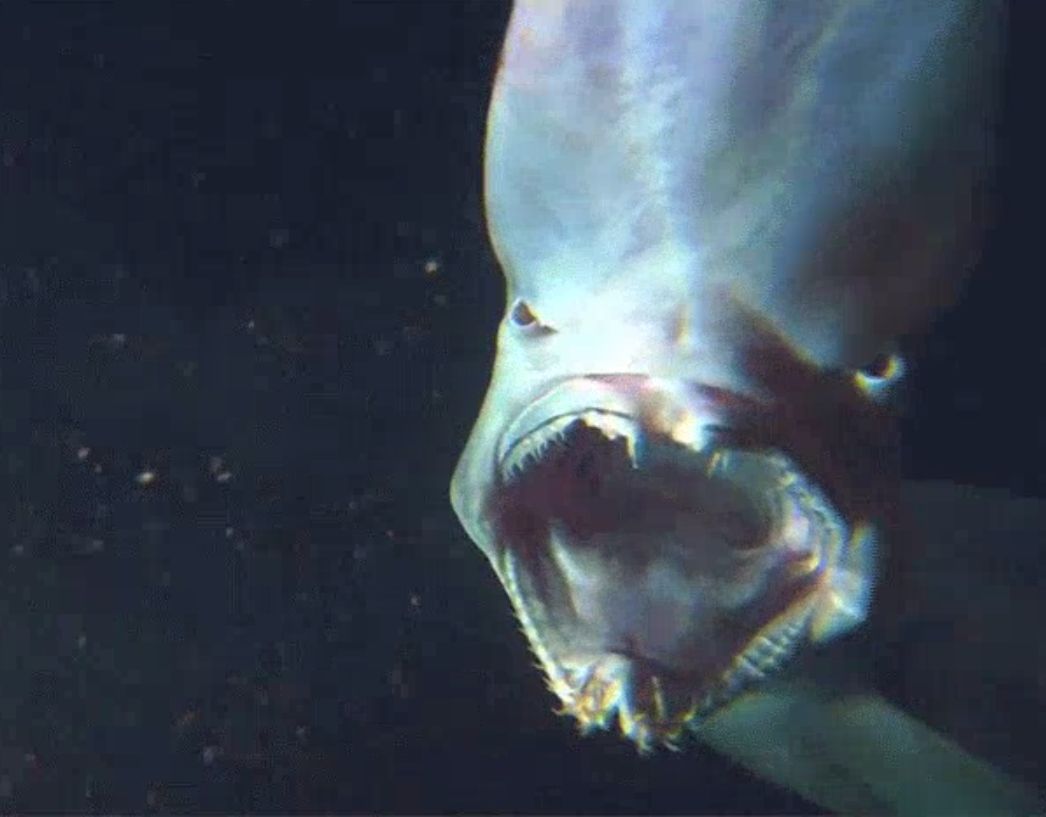 Did you know that when it's about to take a bite out of something, its jaws extend out from the rest of its face like it came out of Alien?

Isn't that a fun fact?

26. And the goblin shark's unique jaw doesn't get any more comforting to look at when you actually watch it eat something.

It still doesn't look like its mouth should be able to move like that, but its strange anatomy lets it turn even fairly large fish like this one into a bite-sized snack.

27. It seems like a fishing boat was lucky enough to catch a shark while it was in the middle of eating another one. 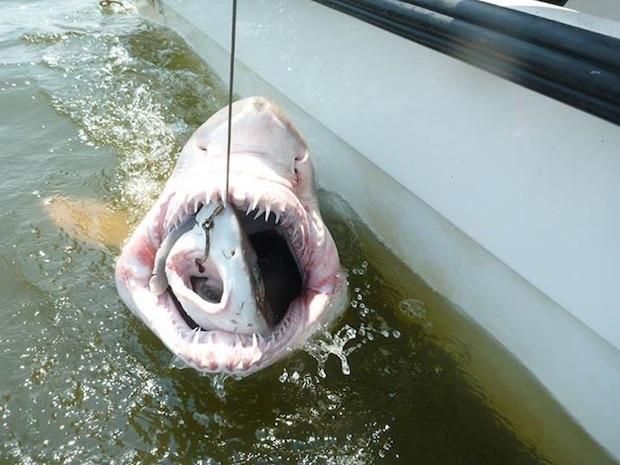 So instead of bringing up one terror of the deep with its mighty jaws wide open, they dredged up two at the same time.

28. This friendly fellow is known as a frilled shark and it's not hard to see how it got that name. 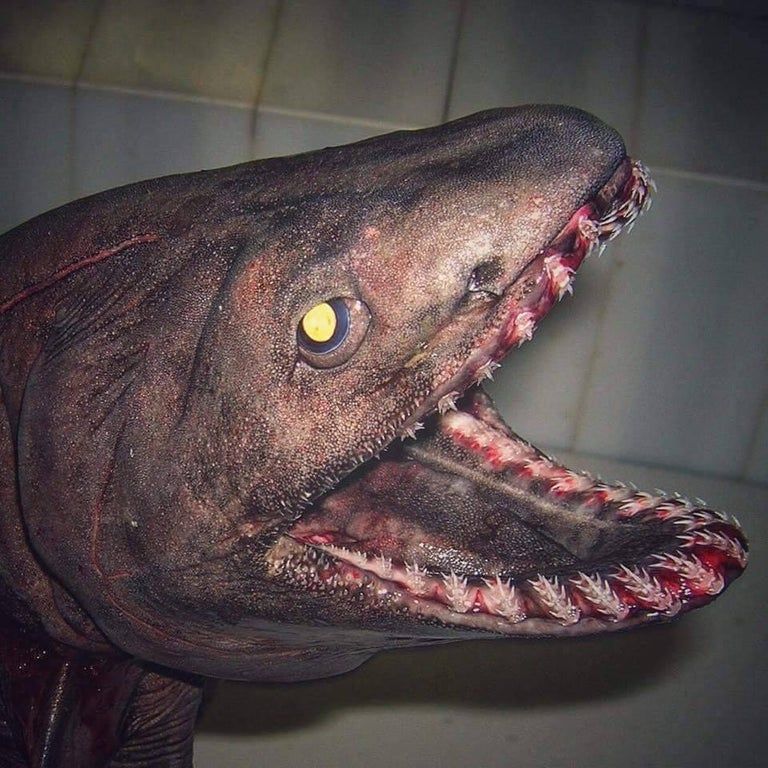 You'll notice that its teeth look a lot different than your average shark, which means anything that ends up between them gets pointed by a bunch of little edges rather than several big ones.

That doesn't sound better, does it?

29. If you look at the frilled shark's whole body, however, it might be hard to recognize it as a shark at all. 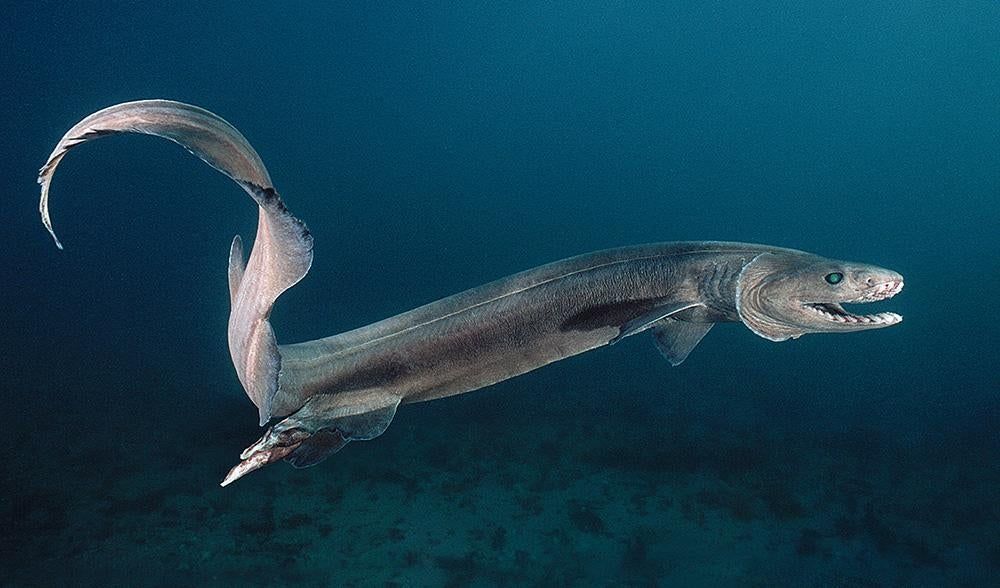 However, if you take a close look at its mouth, you'll see that it has the same trademark teeth as the one in the previous photo, so there's no mistake here.