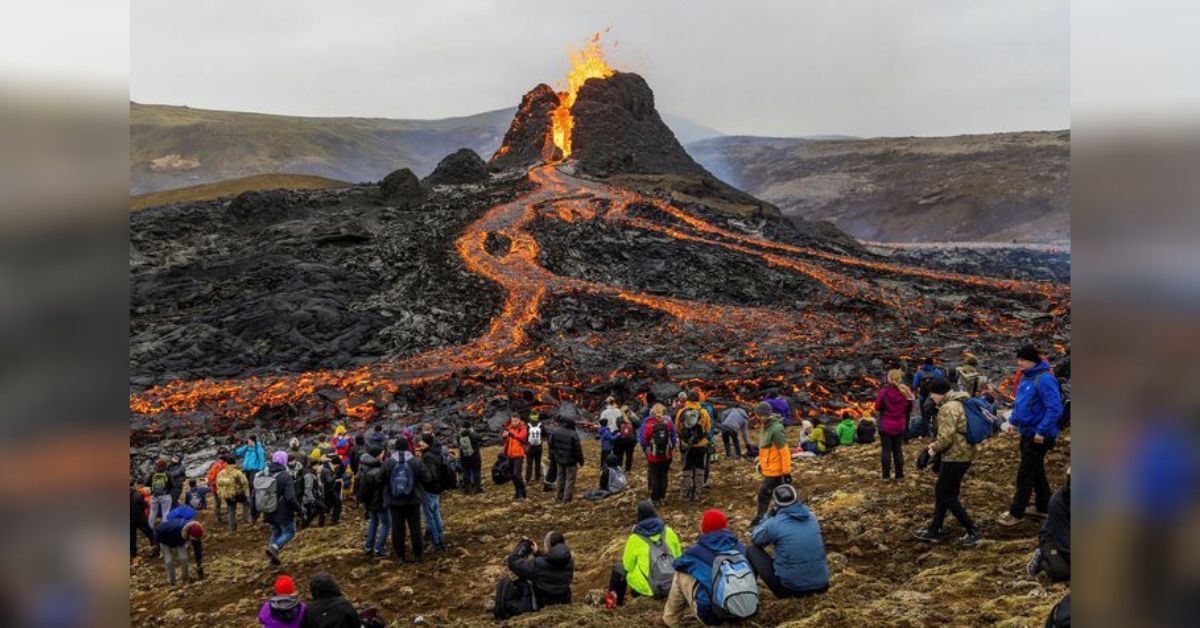 Generally speaking, it's a great idea to be as far away from an erupting volcano as possible. That's just common sense. There have been far too many tragedies as a result of volcanos, and if you're too close when they blow their tops, well, there's not much you can do about it.

As if we needed any reminders of that, a new study just dropped that suggested the residents of Pompeii and Herculaneum were snuffed out in a matter of 15 minutes when Mt. Vesuvius erupted in 79 AD.

Which is why it's more than a little odd to see people trying to get closer to an eruption in Iceland.

The fact that Iceland would experience an eruption wasn't a huge secret a couple of weeks ago.

Although Mt. Fagradalsfjall hadn't erupted in more than 800 years, the event was preceded by a swarm of more than 50,000 earthquakes in a matter of weeks, as the BBC reported.

The geological activity finally came to a head on March 19, when lava burst through the surface just 40 kilometers (about 25 mi) from the nation's capital, Reykjavik.

That volcanic outburst was certainly concerning, but perhaps not quite as bad as it sounds.

Yes, that's closer to a major population center than is ideal, but it's also four times farther away than Pompeii was from Vesuvius. So, while locals were largely out of danger, they were also at a decent distance to feel curious about the sudden glow on the horizon.

It didn't take long for drone footage to pop up on social media — some of which is quite startling, like this footage that takes us along the path of the lava flow and through the still-spitting mouth of the volcano.

And, once things were deemed safe enough, onlookers started gathering around the volcano.

Hikers appeared in droves after the all-clear was given. "It's absolutely breathtaking," 21-year-old Ulvar Kari Johansson told AFP. "It smells pretty bad. For me what was surprising was the colors of the orange: much, much deeper than one would expect."

"For me, it's the heat that really surprised me," Emilie Saint-Mleux told AFP. "When we approached the lava flowing on the ground, the temperature rose by 10-15 degrees and our faces flushed."

To be sure, it's not all hikers and gawkers gathered around the glowing hot lava fields.

Scientists are on the scene as well, both studying the eruption and monitoring the situation.

And Reuters cameras on the scene caught some of the scientists cooking themselves up a hot dog lunch using the heat from the lava to warm the meat. If nature's going to supply the grill, why not?

In many bystander videos, crowds can be heard chatting and oohing and aahhhing at the action from the volcano, much like at an outdoor concert.

However, authorities have been on the scene as well, making sure everyone stays safe.

And indeed, after a couple of days of crowds gathering, the site had to be shut down again on March 22 due to rising levels of gas pollution. Volcanos often release substances like sulphur dioxide, which can be fatal to humans.