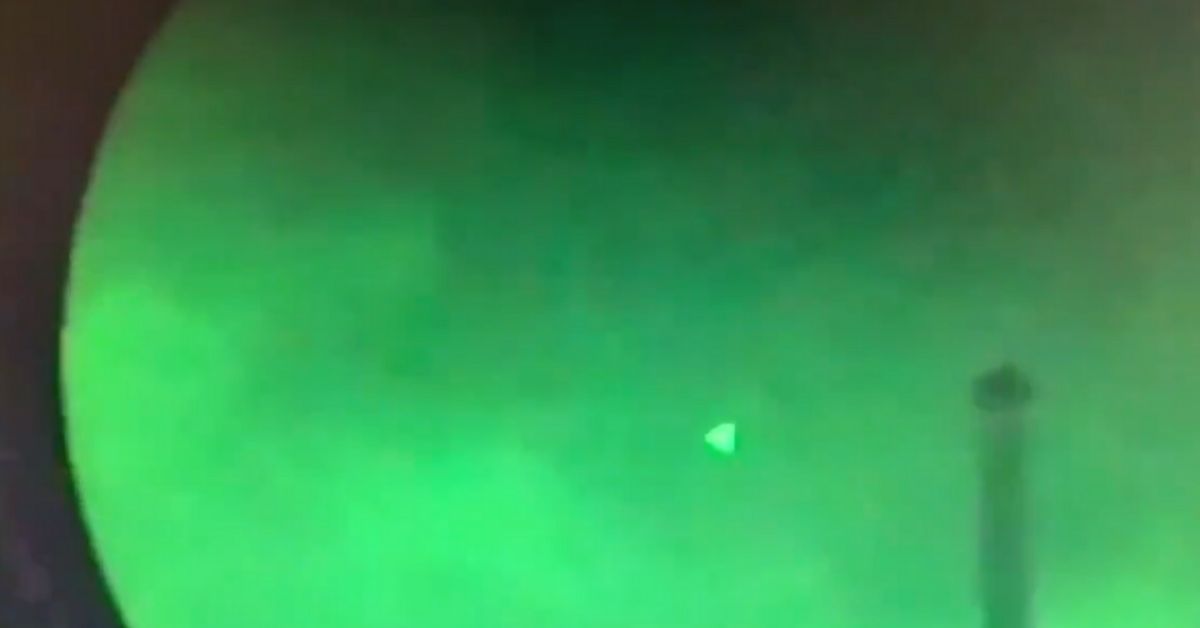 Whether you call them Unidentified Flying Objects or Unexplained Aerial Phenomena, reports of weird sightings in the skies were up in 2020 — big time. With so many people sidelined by the pandemic, skygazing became a more popular pastime, which was accompanied by a spike in UFO reports — 167,632 of them in the U.S., according to UFO researcher Cheryl Costa.

And it's not just loners out in the desert, either — pilots on an American Airlines flight caused a big buzz when a recording of their UFO sighting hit the headlines in March.

But it's a past sighting by U.S. Naval personnel that's garnering headlines now after video of the encounter leaked.

In a departure from long-standing practices, U.S. officials have been increasingly acknowledging that not everything seen in the skies can be explained.

The latest example is a video leaked to documentary filmmaker Jeremy Corbell, who posted the night-vision video of a pyramid-like object on his Twitter account.

"This (video) was taken on deployment from the USS Russell," Corbell told Mystery Wire. "It shows what they described as vehicles. And they made a great distinction. They made sure in this classified briefing, they made a great distinction that this is not something that we own either a black project, this is not something of a foreign military, that these were behaving in ways that we did not expect. And that they were, you know, shaped non-aerodynamically. Like pyramids, these are flying pyramids!" 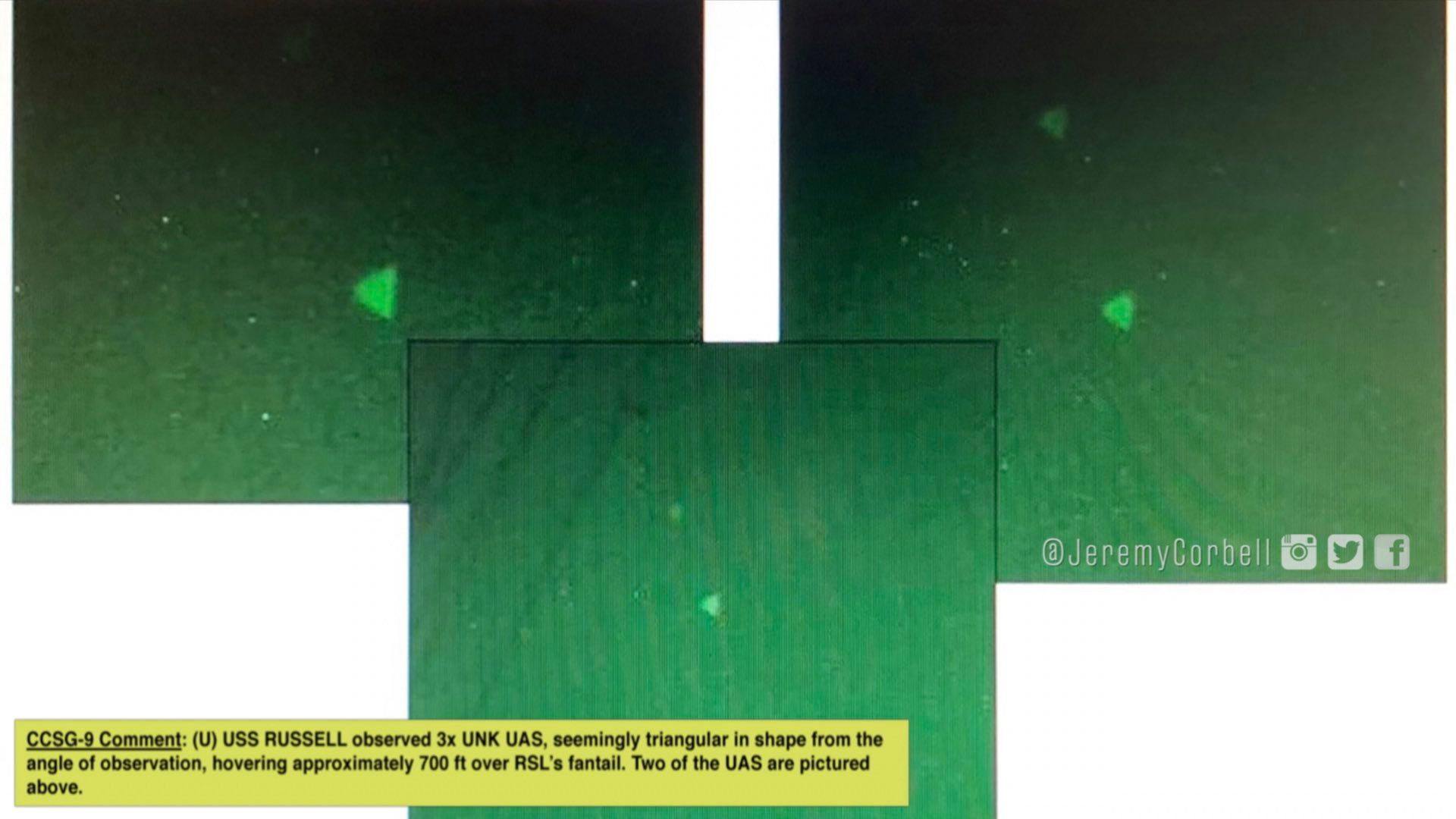 A Pentagon spokesperson confirmed to Futurism that it was indeed legit. "I can confirm that the referenced photos and videos were taken by Navy personnel," the spokesperson, Sue Gough, told the outlet.

Other reports of similar encounters by U.S. Navy vessels in southern California waters suggested the objects were drones, but the Navy and the military's UAP Task Force both consider them unexplained, Mystery Wire reported.

However, the UAP Task Force is investigating the incident in the video.

"The UAPTF has included these incidents in their ongoing examinations," Gough told Mystery Wire. "As we have said before, to maintain operations security and to avoid disclosing information that may be useful to potential adversaries, DOD does not discuss publicly the details of either the observations or the examinations of reported incursions into our training ranges or designated airspace, including those incursions initially designated as UAP."

The encounter with the pyramid-like object wasn't the only incident leaked to Corbell, either. 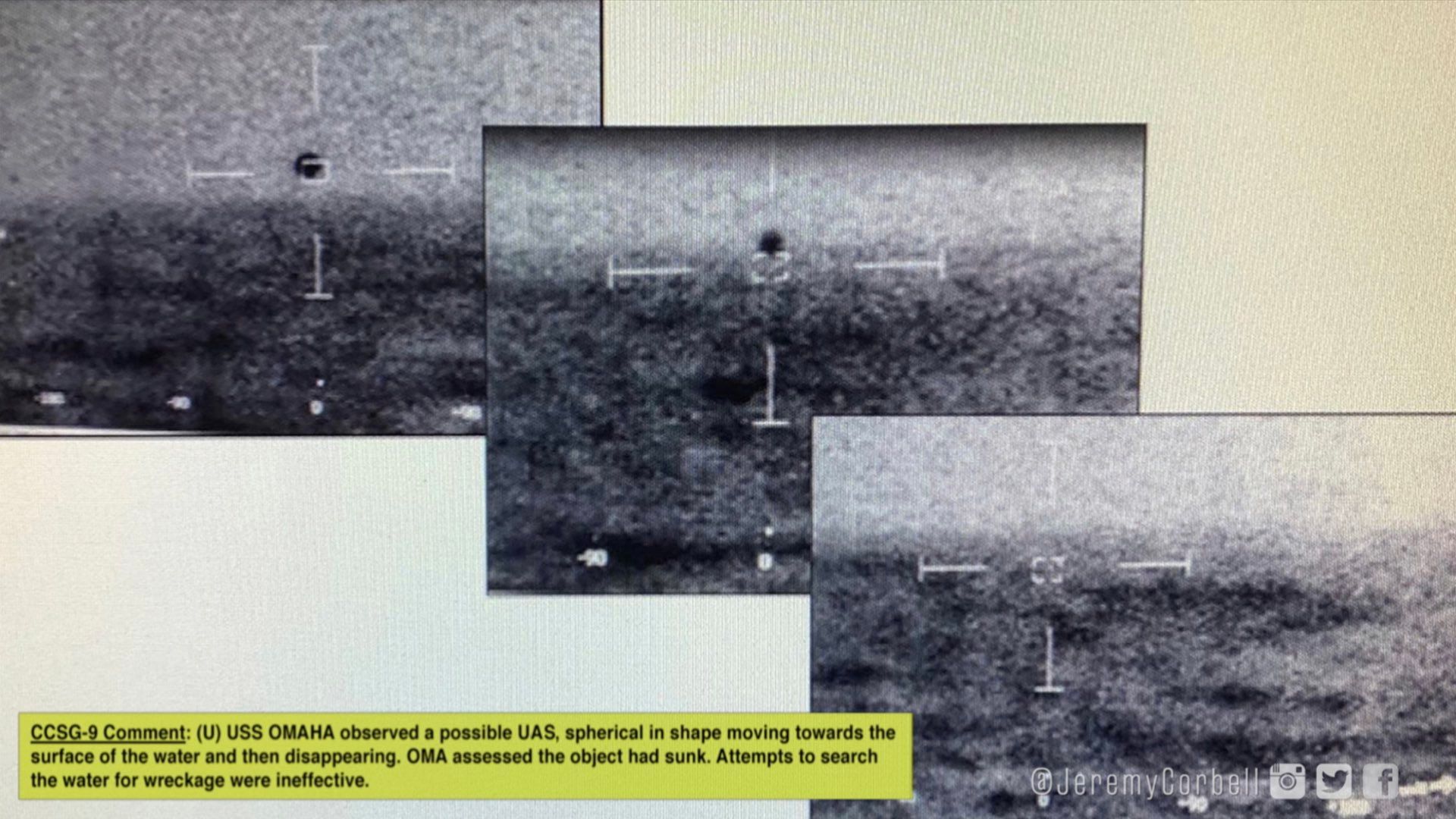 This spherical object was spotted by crewmembers aboard the USS Omaha around the same time as the USS Russell incident.

It was reported to have flown near the ship before descending beneath the ocean's surface, and according to Mystery Wire, the Navy considers it a "trans-medium vehicle."

As for the night-vision video, attempts at an explanation have been made.

In a YouTube video, Mick West, a UFO skeptic, suggested the "flying pyramid" recorded in the night-vision video could be the result of bokeh, an optical effect involving blur often employed by photographers.

West believes that the footage could have been created using homemade or augmented night-vision equipment on a smartphone.

What do you think? Let us know in the comments?