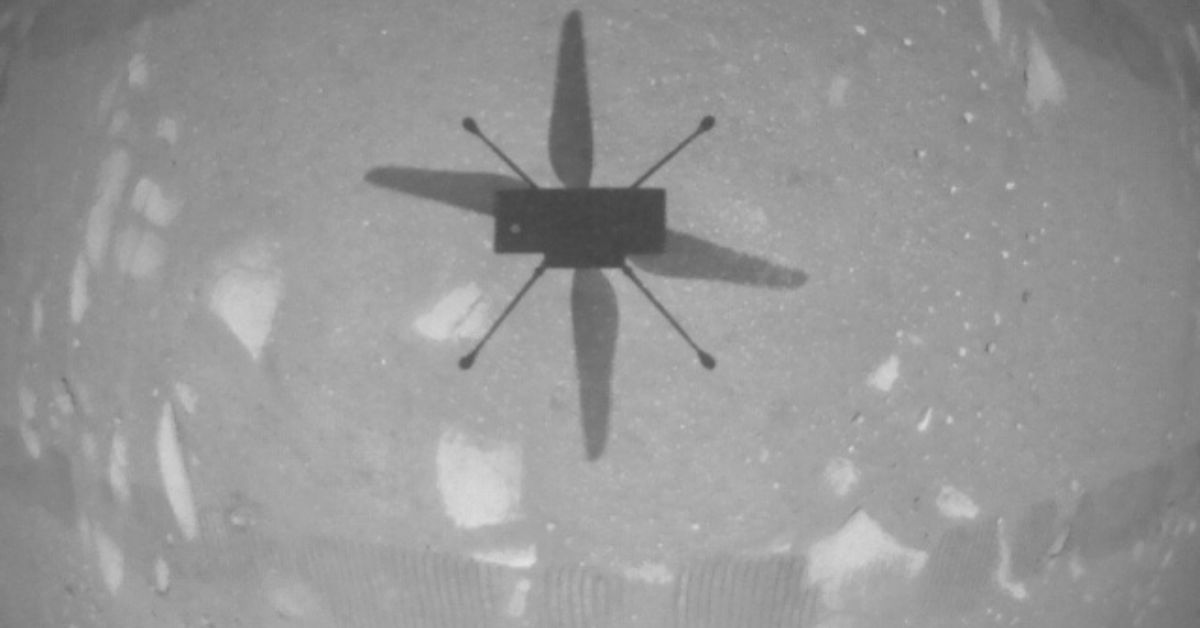 It's hard to believe that humans — or at least, our robots — have had a presence on Mars for almost 25 years now, with the first rover, Sojourner, having touched down back in 1997.

Since then, NASA's track record on Mars has been exemplary, although it may have seemed like progress in exploration of Earth's neighbor has moved along incrementally. But that's sort of the nature of exploring a planet millions of miles away, where even radio signals between the two planets take up to 20 minutes to cross the vast distance.

So while the rovers have done an amazing job making discoveries so far from home, the newest development is a true technological leap, both figuratively and literally.

NASA has once again made history, this time by successfully flying a helicopter on Mars.

The team at NASA's Jet Propulsion Laboratory erupted in well-earned celebration after confirming that Ingenuity — a little rotorcraft that hitched along with NASA's latest rover, Perseverance — had indeed managed to take flight in the thin Martian atmosphere early Monday morning.

There was considerable doubt about whether or not Ingenuity would be able to take to the Martian skies at all.

While Perseverance landed on Mars back in February, Ingenuity needed some prep time and had to show that it could survive a night out in Mars's crushing cold, where temperatures can dip to -90°C (about -130°F).

Even after making it through the night, a software issue discovered in pre-flight checks necessitated an update that delayed the flight from its launch initially scheduled for April 11.

Ingenuity's first flight wasn't much but it was a good start.

The little helicopter that could was only in the air for less than a minute, basically testing out its rotors and proving that it could indeed get off the ground.

With about 1% of the density here on Earth, Mars's atmosphere provides little for a helicopter's blades to create lift with, so Ingenuity was designed to spin its rotors at over 2,500 rpms — about five times as fast as an earthbound helicopter's.

Now, Ingenuity's mission will get progressively more challenging and ambitious.

NASA is intending to fly the little copter four or five more times in the next few weeks — mostly as a tech demonstration — with the next flight slated for April 22.

"The primary purpose of this project is to get that detailed engineering data that we can see the performance of the vehicle, and then that data can be used by future projects to make even bigger and better helicopters," Tim Canham, Ingenuity operations lead at JPL, told CNN.

If it ever seemed like the rovers, crawling across the planet's surface, were going slowly at exploration, just wait until helicopters get more involved.

But we can expect more images and videos from Ingenuity, too.

"We've been talking about our Wright Brothers moment on another planet for so long. And now, here it is," Mimi Aung, JPL's Ingenuity project manager, told CNN, saying that the team had every intention of doing all they can with the helicopter.

"Once we get to the fourth and fifth flights, we'll have fun," Aung said. "We really want to push the limits. It's not every day that you get to test a rotorcraft on Mars. So we want to be very adventurous."